On March 16, the same day major exhibitors AMC and Cinemark indefinitely shuttered all U.S. locations, NBCUniversal took a step toward collapsing the theatrical window. The studio said it would release a sequel to its 2017 animated hit Trolls (which grossed $346 million globally) on-demand on April 10. The price: $19.99.

Other major studios mostly haven’t followed suit so far, preferring to delay their pricey tentpoles and save them for theatrical release first. And its unclear whether or not most American consumers will embrace a $20 price point if more theatrical-bound films go directly to on-demand platforms.

U.S. adults say the on-demand price range that they’d be willing to pay for a movie currently in theaters is $5 to $8, with the optimum price being $6, a new Hollywood Reporter/Morning Consult poll finds. The survey was conducted among a nationally representative sample of 2,200 adults from March 19 to 21.

Box Office Dispatch: How Real Is the Boom and Will It Last?

In what could reflect economic insecurity amid the novel coronavirus pandemic, the acceptable price range found in the survey is not only lower than $20 but also lower than some on-demand prices for studio films that have already had a run in theaters. While 40 percent of those surveyed said they’d be more likely to rent movies at home now, 35 percent replied that they’d be less likely to do so.

And while some Wall Street analysts have suggested that streaming services like Netflix, Hulu and Disney+ could get a boost amid stay-at-home orders, more Americans said they were less likely to make those buys.

As for what Americans are watching while staying at home, film and TV comedies appear to be in, while dystopian titles are out. About 70 percent of U.S. adults said they were more likely to watch comedies amid the outbreak, the highest percentage for any genre followed by action/adventure (63 percent), drama (58 percent), thriller/mystery (56 percent) and documentary (53 percent).

Only 15 percent of those surveyed said they’d be more likely to watch dystopian films or shows now. 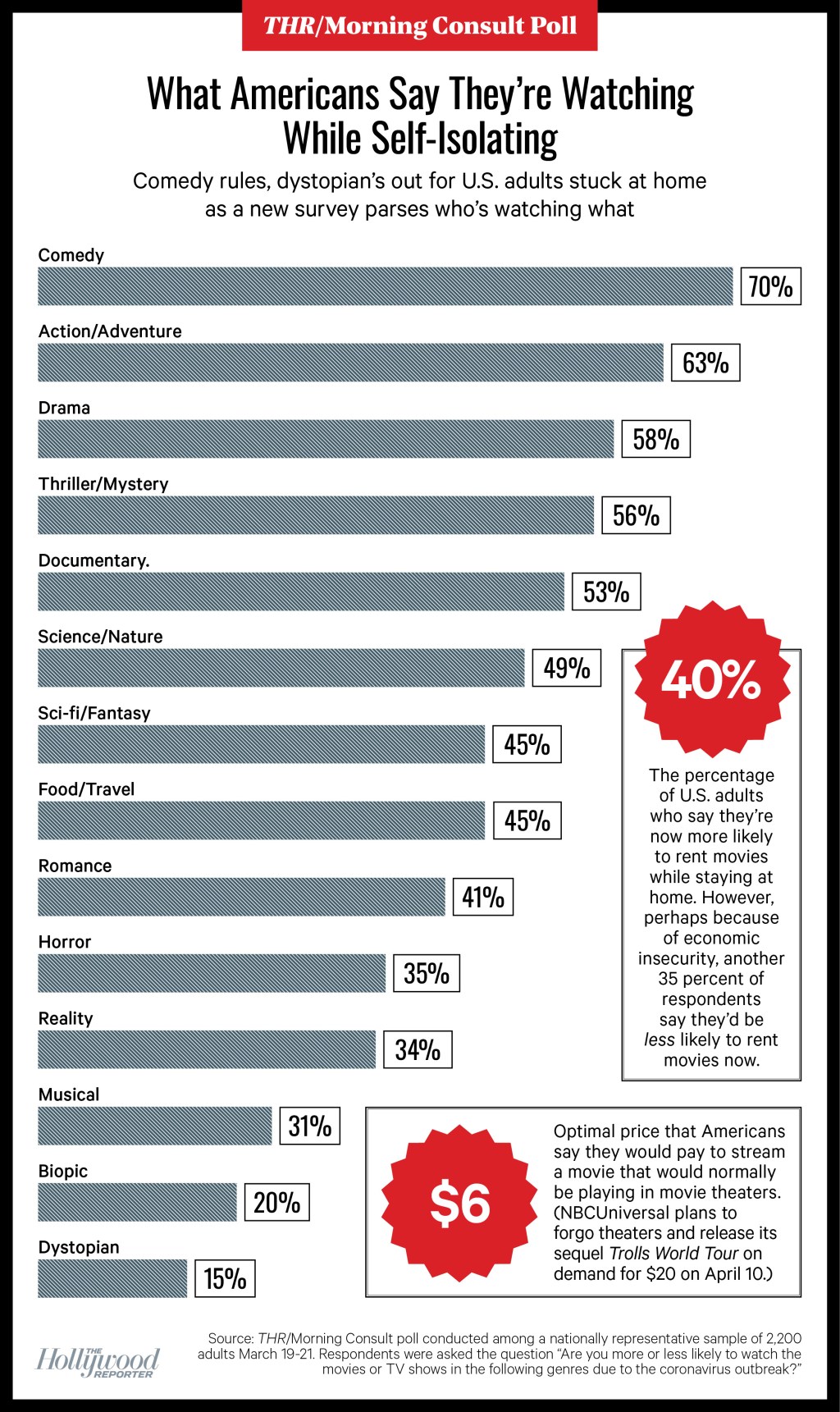