It’s been a setting-of-the-sun time for Hollywood power players of a certain age lately. Ron Meyer, 76, was ousted as vice chairman of NBCUniversal due to scandal. In August, former Universal chairman Tom Pollock died suddenly of a heart attack at 77. Now Jeffrey Katzenberg, who will turn 70 in December, finds himself contending with the high-profile failure of Quibi only six months after the premium streaming service launched. While some say they think he has the resilience to fight another day, others question what future awaits him.

What he has accomplished in the entertainment industry has been more than formidable: Working with powerful allies Steven Spielberg and, for many years, David Geffen, Katzenberg enjoyed enormous success: running the Disney Studios, launching DreamWorks and then overseeing DreamWorks Animation. He was a key part of reviving Disney’s animation business, which brought the world iconic hits including Little Mermaid, Beauty and the Beast and The Lion King. At DWA, there was Shrek and Kung Fu Panda and How to Train Your Dragon. It should be enough for anyone, though Katzenberg says he doesn’t really savor these successes because he never looks back.

Despite those achievements, a significant percentage of the Hollywood ruling class of Katzenberg’s era has never been very generous about him, possibly because of his unshakeable belief in his own opinions no matter how many setbacks he faced. Or maybe he wore his need for validation a bit too much on his sleeve. Dating back to his time at Disney, his desire to become one of the town’s elder statesmen, a successor to the legendary Lew Wasserman, was not well hidden. He touched the bases including politics, becoming one of Barack Obama’s biggest donors, and philanthropy, giving his time and money to many institutions including the Motion Picture Home.

But the Hollywood of Katzenberg’s generation was never going to allow him to take up the mantle. In a town where insatiable hunger is a common trait among those on the topmost rungs, Katzenberg’s need for recognition might have been too much of a reminder of the endless gnawing. It is said we dislike in others what we don’t care for in ourselves.

Katzenberg described this trait in himself in an Oct. 22 interview on CNBC, during which he heard Quibi described as “a dramatic failure” as he was introduced. Asked what he might do in the aftermath, Katzenberg responded, “I have a bottomless well of need to win.” While he is capable of recognizing that, he could not accept the idea that in conceiving and executing his vision for Quibi, his taste and instincts were simply wrong. He’s repeatedly questioned whether the pandemic played a role in Quibi’s failure, but the truth is that top industry figures had warned him the idea wouldn’t work before he even got started.

No one can say that Katzenberg didn’t work. His mantra — “If you don’t come on Saturday, don’t bother to come on Sunday” — became well known in the 1980s when he became head of the Disney film studio in his mid-30s and never wavered. Then as now, he had immense confidence in his skills when it came not just to buying, but to micromanaging the creation of, content, and a belief that he could control the narrative by courting the media.

According to a top industry executive, the original idea for Quibi was that it would be fully backed by the studios. Multiple sources say Katzenberg initially approached with a nine-figure ask from each, starting with Disney chairman Bob Iger because Disney was so dominant, and where it led others would follow. “He relentlessly kept asking,” says the exec, adding that Katzenberg’s relentlessness is “what makes him a genius in many ways.” But the answer was no, and the ask was lowered by degrees. Katzenberg still needed studios. It would enable him to say to outside investors, “I have Hollywood. I have access to talent,” as one executive approached to help finance the service explains.

Every claims to have been a Quibi doubter now, but in many cases — at least within Hollywood — the claim is legit. According to sources, it was power lawyer and Quibi board member Skip Brittenham who finally persuaded Disney to jump in with a modest $25 million investment. He is said to have agreed to go along not because he thought the idea would work but, in part, as a learning exercise in streaming and, in another part, because he expected Quibi to cycle at least some of that money back to Disney to develop content. That made the risk nonexistent — while one source says that development never happened, another says Disney recouped its investment via a deal for a daily ESPN sports show.  (Quibi did buy content from others, such as NBC News, to which it still owes money.)

After Disney got in, the rest of Hollywood followed — Fox and NBCU also to the tune of $25 million apiece, and Viacom and Sony for $10 million each, according to figures uncovered by The Information. “Everybody else didn’t want to look like an idiot,” says a top exec at one company, adding, “The feeling was, ‘If we invest and they committed to buy content, then we are fine.’” Says another industry source: “It was the Hollywood fear of, ‘I told you so.’ And do not underestimate how much it was, ‘I don’t want to see him on my call sheet’ because he is so relentless. It’s just like the Motion Picture Home. It’s easier to pay him than to be nagged.”

Armed with the ability to say that every studio was backing the project, and with co-founder Meg Whitman’s connections bringing in institutional investors, the duo made Quibi a resounding success at least in terms of raising money: $1.75 billion. While sources with ties to the company say content creators should get some of the money they’re owed because Quibi shut down while there was still a lot of cash on hand, investors will get hurt.

The failure of Quibi is presumably the most stinging of Katzenberg’s long career — more painful than being fired as chairman of the Disney studios in 1994. He was enjoying enormous success at that time. Disney had just released The Lion King, a giant hit following a string of animated successes. With his penchant for control of even tiny details, Katzenberg had reason to think well of his own judgment.

But then-Disney chairman Michael Eisner, who along with Barry Diller had been patronizing Katzenberg since their days at Paramount starting in 1974, thought Katzenberg had entirely too good an opinion of himself and ultimately fired him. Katzenberg had also alienated Roy Disney, whose business partner Stanley Gold — then a Disney board member — publicly criticized Katzenberg’s “ego and almost pathological need to be important.” Eisner’s sneering attitude was memorably revealed in a 1999 trial, when it came out that he had said of Katzenberg privately (he thought): “I think I hate the little midget,” and “I’m the cheerleader and he’s the tip of my pompom.”

After Disney ejected him, Katzenberg quickly rounded up Geffen and Spielberg to launch DreamWorks. The plans were nothing if not grandiose even though no one had succeeded in starting a studio from scratch in memory. The trio, along with Imagine Entertainment partners Ron Howard and Brian Grazer also tried to start Pop.com, a short form video portal that would have preceded Quibi by two decades, but after hiring 125 employees and setting up shop in Glendale, the venture popped before launching. Dreamworks itself certainly made some good films (American Beauty, Gladiator, Shrek) but then began to founder. “It was a success in varying degrees,” Katzenberg told me in April. (He declined to comment for this story.) 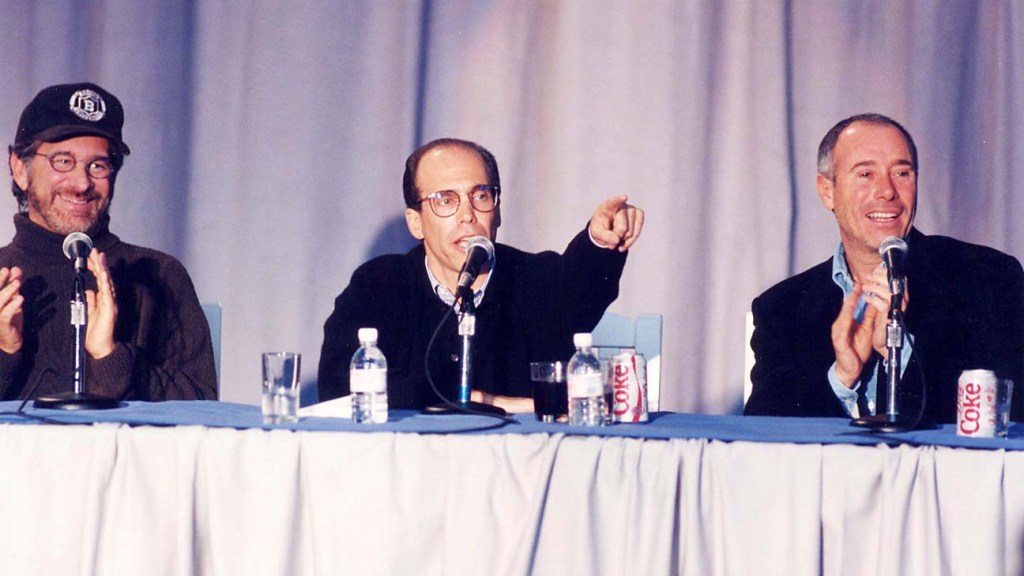 In Geffen, meanwhile, Katzenberg had found another strong and difficult man whose approval he could never quite win. The two ultimately had a bitter split, supposedly because Geffen was not seated with family at the wedding of Katzenberg’s daughter. (Geffen, now 77, still has lines into Hollywood from his yacht but hasn’t been an active player since 2008, making him yet another member of the vanishing generation.)

In 2004, pressed to raise funds to repay DreamWorks investor Paul Allen (at least in part), Katzenberg was more or less forced to take over the spun-off DreamWorks Animation. Like the original company, DWA made some very popular films before it started to struggle. The company was sold to NBCUniversal in 2013 for $3.8 billion, and the company paid to buy the assets without Katzenberg at the helm. (He came away with an estimated $420 million.)

Along the way, Katzenberg had tried to be a pioneer, relentlessly promoting 3D technology. He called it “the greatest advance in the film industry since the arrival of color in the 1930s.” It was not.

At Quibi, Katzenberg was out to prove himself, yet again. “This was supposed to be a redemption thing,” says a former colleague. This time, Katzenberg did not have an implacable older man to impress, which may not have been a good thing. Quibi announced a dizzying list of creators ready to make its content. Some, such as Guillermo del Toro, are genuine Katzenberg fans — though sources say neither he nor Spielberg really had deals in place to make shows for the service. Still, del Toro’s agent, WME’s Robert Newman, says formal deal or no, del Toro was in Katzenberg’s camp. “All of the filmmakers with whom I work would happily work with Jeffrey on anything, any time,” he says in an email to THR. (Newman’s client list also includes Danny Boyle and Alfonso Cuaron.)

Katzenberg had some allies, but many in the industry waited, expecting the splat. No doubt Geffen and Eisner were watching. Even Diller still lurked, giving a classically passive-aggressive interview to NBC News in March 2020. Diller expressed admiration for Katzenberg’s big bet, but didn’t stop there. “Most people when they hear it aren’t overwhelmed by the idea, which makes it all the gutsier,” he said, adding, “Whatever happens, he’s so naked out there with this. … He’s just standing there waiting for the tide to either come toward him or leave him naked on the beach.”

“I don’t pretend to know what kids are going to like anymore,” says a high-level Quibi colleague who is actually several years younger than Katzenberg. “But Jeffrey is, like many entrepreneurs, a true believer in [his] own underlying ideas.” By the end, says a source, Quibi had only 100,000 active users a day, and cancellations were coming in fast.

In the CNBC interview, Julia Boorstin asked Katzenberg what had to be another painful question: “Can you imagine taking on investors again?” He responded by talking about his need to get back on the horse and charge up another mountain. But a longtime associate assesses the situation bluntly: “He’ll bounce back from this,” he says, “but certainly a lot of his credibility is gone. He’s got to pick something he knows he can succeed at.” What may that be? Maybe tech, this person says, before adding, “Not content.”