To behold the view from 900 Stradella Road in Bel Air, you might think it’s the best in all of L.A. Built on a promontory, the five-bedroom, nine-bath spec home is oriented to extract maximum value from its 280-degree vista, which extends from downtown to the ocean — what real estate agents call a jetliner view. But with its price tag of $45 million, the key word is “value.” So how much is that 280-degree view worth?

“You just can’t put a precise value on it,” says The Agency’s David Parnes when asked how he and partner James Harris figured the Stradella view into the home’s price. Nearly every room benefits, as does the pool, notes Parnes, from the house’s singular perch, unobstructed by nearby roofs or power lines. But when a potential buyer walks in, “that’s when emotion comes into play,” says Parnes, “and there is a huge link between value and emotional provocation.”

Demand for views has never been higher, says Hilton & Hyland’s Jeff Hyland, with soaring home prices across the city now drawing out sophisticated buyers who want it all and have more data insights into features. “A view is the prime interest for a lot of these younger buyers who value views over big, level backyards,” notes Hyland. “They’d rather have a floor-to-ceiling glass box than an elegant, stately Paul Williams or Wallace Neff home.” And while demand is up, supply could soon slow: L.A.’s City Council in March passed an “anti-mansionization” ordinance imposing tighter restrictions on hillside homes that will limit the number of new hillside developments (and new views). 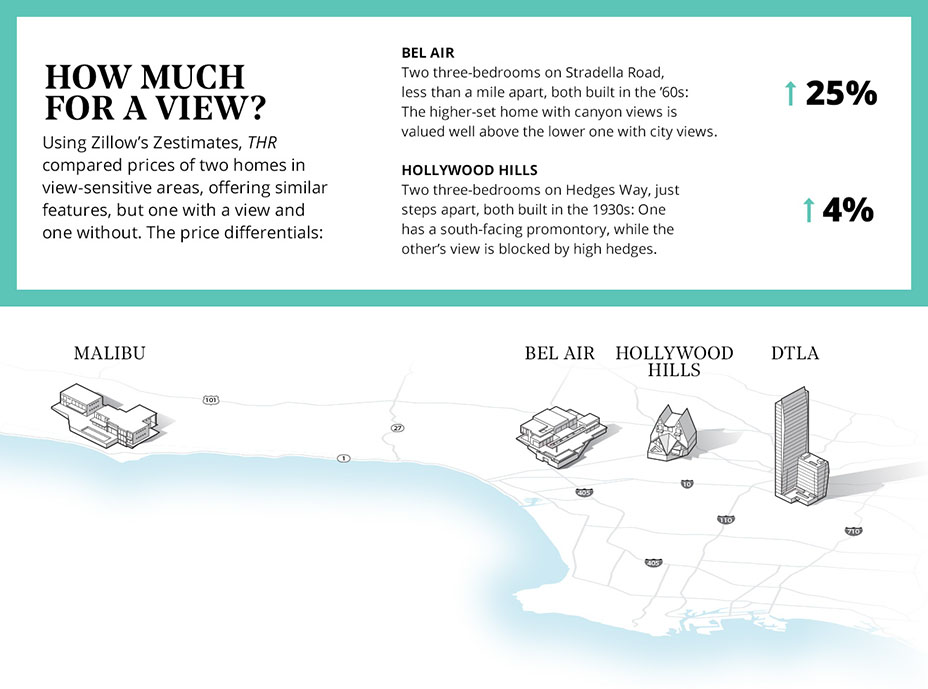 “Views are perfectly measurable if you have the right data sets,” says Zillow’s chief economist Svenja Gudell. Zillow, the online real estate clearinghouse, applies its “Zestimate” algorithm to millions of homes listed on the site, setting a market price based on comps and other variables. There’s no variable — yet — to reflect the value of a view, acknowledges Gudell, but she expects that to change as counties and homeowners provide detailed information like high-resolution images of a view from individual rooms and outdoor areas. Also of use, she says, would be upcoming construction permits, projected tree and foliage growth, and whether cellphone towers or power lines are being installed.

But brokers balk at the notion that an algorithm can accurately capture such nuances. Malibu-based developer Scott Gillen recently spent a record $50 million for a bluffside tract, where he plans to build five homes, all with unobstructed south-facing ocean views, priced from $40 million to $60 million. Gillen has encyclopedic recall of the best views in Malibu but retreats when asked to put a number on one. “I price it like it is art,” he says. “It either gets you or it doesn’t.”

Hollywood Hills specialist Jason Oppenheim has devised his own rating system for views in the Hills: a “10” spans east to Griffith Observatory and downtown, and west to the ocean. But Oppenheim’s system also considers such factors as the side of the street the house is on (southern is better) and the chance of future development. “The question alone of whether you can price a view is misleading because it is not just the view you are evaluating,” he says. “There is zero chance that you can find an empirical way to put value on a view.”

Academia is, naturally, on the side of data. Paavo Monkkonen, associate professor of urban planning at UCLA’s Luskin School of Public Affairs, says there is a cottage industry that looks at hedonic pricing models as they apply to real estate (put simply, hedonic pricing says the price of a good is determined by both internal characteristics and external factors). He cites a study that analyzed the price of views in Hong Kong from one waterfront tower, totaling how many inches of view each unit offered from various rooms and outdoor areas. Apply a fixed value to each of those inches and voila. Creating a similar model for L.A. wouldn’t be “complicated,” says Monkkonen, with the right (huge) data set. Hyland counters that outside of downtown, L.A. views aren’t just about verticality. Says Monkkonen, “You can quibble about why that is not comparable in this and that way, but the statistical model uses a lot of data to generate the additional impact of one feature.” THR surveyed recent sales and listings across the city to give a sense of the impact of a view on L.A.’s top markets now.

23800 MALIBU CREST DRIVE Gillen only scouts properties where he can develop homes with south-facing views — like a home overlooking the Malibu Pier that Matthew Perry sold for $10.65 million in 2015. Points and bluffs provide the best promontories; waterfront homes offer dramatic vistas during the day, but after sunset, the ocean can appear dark, flat and dull. South-facing views provide additional value from the lights of the city and piers. Coldwell Banker’s Sandro Dazzan and Brittany Monforte, and Hilton & Hyland’s Branden Williams hold the listing on this south-facing new build, the Malibu Castle, where a 1978 faux Scottish castle previously stood. 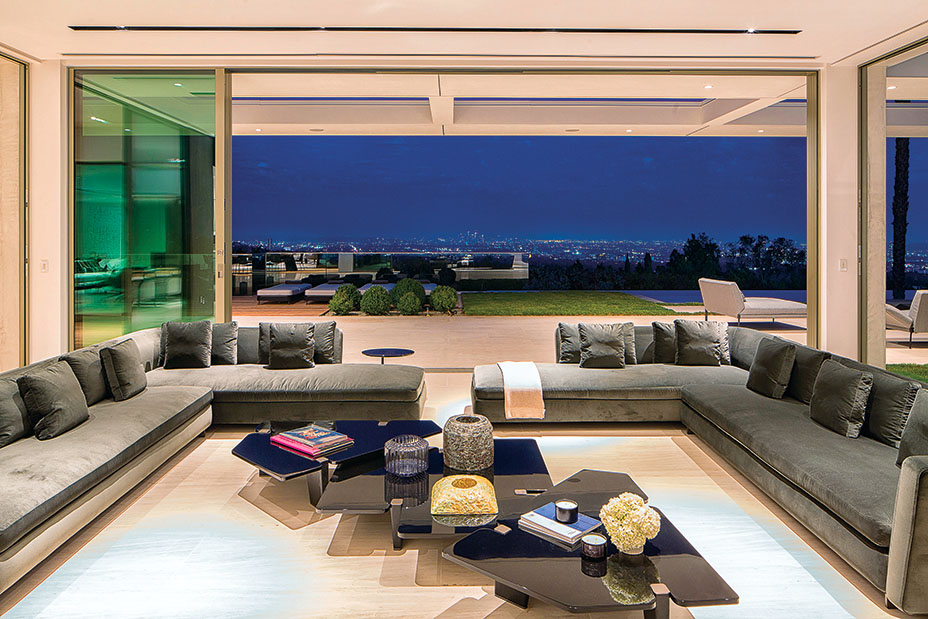 900 STRADELLA ROAD “For me, Bel Air is number one,” says Harris, who adds that the tony area offers larger lots and greater privacy than a nabe like the Hollywood Hills. He and Parnes hold the listing on this five-bedroom new build, and they closed Nov. 21 on the $17.7 million sale of 332 Bel Air Road, the site of Bob Newhart’s estate until he sold it in 2016. Bel Air also is home to one of L.A.’s handful of 360-degree views, including a hilltop at the end of Airole Way, where a $500 million Nile Niami spec mansion will come to market in a few months. Going higher up doesn’t always translate into a better parcel of land, Hyland cautions, and slow, windy drives are a turnoff for some buyers. 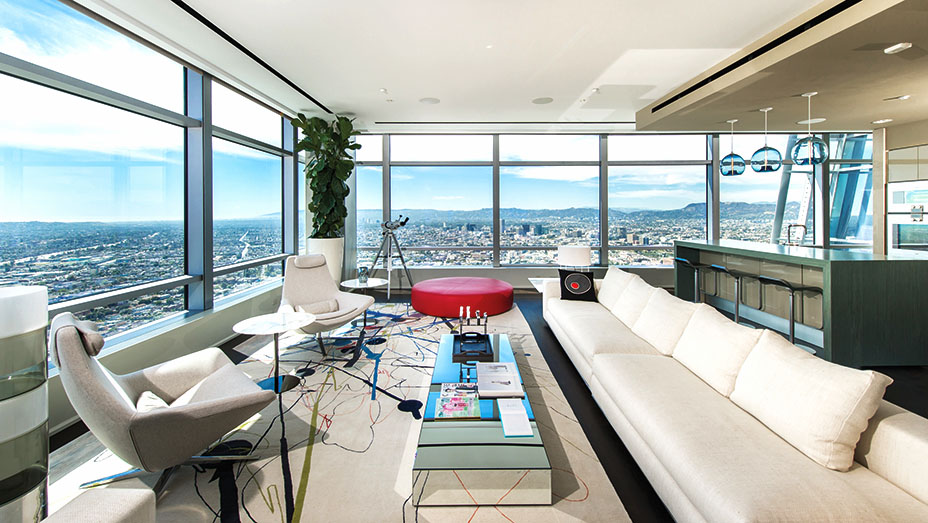 900 W. OLYMPIC BLVD., #51A “In condo buildings, there is a pricing nomenclature from the bottom to the top,” says Compass’ Hana Cha, who oversaw sales in the Ritz, where Floyd Mayweather bought. In a 50-story building, going up one floor in the lower reaches can bump the price from $10,000 to $15,000. But on higher floors offering open views, the per-floor premium can be $50,000 or more, says Cha. A westward-facing view above the skyline “is the money shot,” she says. This 6,590-square-foot duplex with floor-to-ceiling southeastern and western views recently sold for $9.25 million. The building has 17 units for sale, ranging from $1.13 million to $7.9 million. 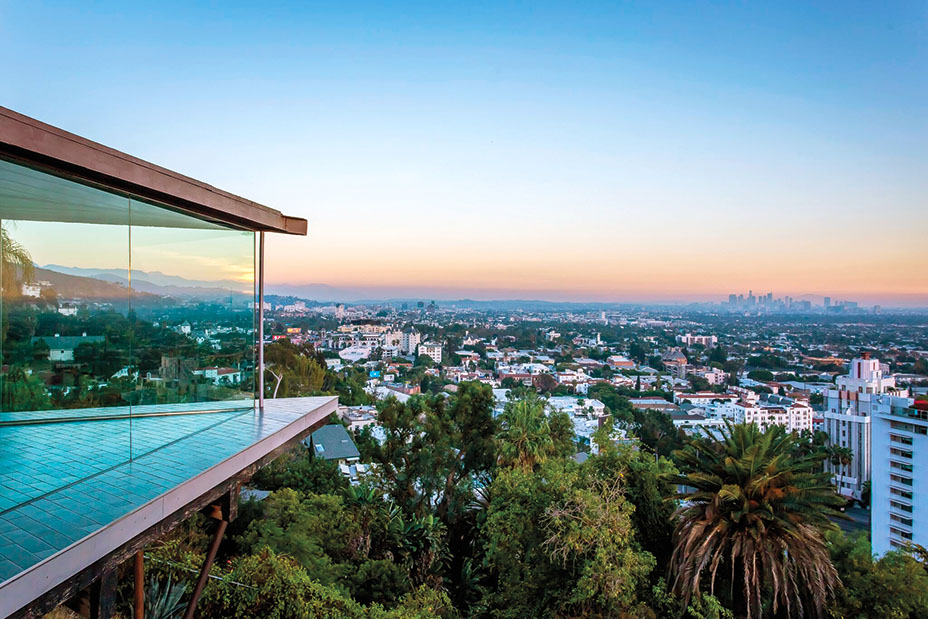 8448 HAROLD WAY “There is no harder area to price than the Hollywood Hills because there are so many nuances that you don’t find in the flats,” says neighborhood specialist Oppenheim, who recently sold a home in the area to Taye Diggs. He’s about to list this three-bedroom, three-bath home on the southern side of the street — the preferred side, per Oppenheim’s own Hollywood Hills view rating system, which also factors in proximity to Sunset Boulevard (and its attendant noise) and the seasonal trajectory of the sun.