“Unprecedented” has become a buzzword amid the pandemic, but when it comes to the financial fallout from business interruptions and the resulting landscape of lawsuits against insurance companies that are denying claims, there truly has never been a fight of this scale.

The 1970s brought a wave of business interruption suits against insurers involving asbestos contamination; in the ’80s, environmental pollution led to courtroom fights; and the terrorist attacks on Sept. 11, 2001, launched a litany of legal disputes, the last of which didn’t end until 2018. Yet the legal war over COVID-related insurance claims is expected to dwarf any of those battlefields, according to those entrenched in this niche of law. “What you see with COVID19 is, it affects everyone, not just companies that have asbestos or environmental issues,” says Ty Childress, chair of Jones Day’s insurance recovery group and the lead lawyer for World Trade Center Properties during the 9/11 insurance litigation aftermath. “There are well over 1,000 coverage cases across the country already, and we’re still in act one of the play. There are exponentially more policyholders in the claims process right now.”

While the bulk of the disputes center on business interruption insurance, Childress says claims about cyber risks arising from so many people working from home and other employment and premises liability issues are likely to follow.

A few major entertainment players, like United Talent Agency and Major League Baseball, have waded into the fight and sued their insurers. But despite widespread production impacts, shuttered theaters and billions in financial losses, most of Hollywood’s largest companies are sitting on the sidelines for now, notes Greenberg Glusker partner Jonathan Sokol. “A lot of businesses in the entertainment industry are going to wait and see how these cases play out before they decide whether to invest in coverage litigation,” he says, adding that one big win could trigger a deluge. “There could be 20 to 30 decisions at the trial court level that all go in favor of the insurer, and if there’s one appeal that goes in favor of the policyholder, then the others don’t matter.”

For the most part, the first wave of litigation has been brought by small businesses, mom-and-pop shops that likely won’t survive without an insurance payout. The world’s largest insurance carriers seem to have taken a unified stance that these losses simply aren’t covered. (None of the insurance companies The Hollywood Reporter reached out to commented for this story.) “Pandemic-related losses are generally uninsurable because they hit all businesses all at the same time,” says Janet Ruiz of the Insurance Information Institute, a trade association dedicated to informing consumers whose members include some of the biggest insurers in the world. “If every business in the country is affected by the same catastrophe, the insurance companies don’t collect enough money to pay that out in losses. So they exclude it.”

COVID-19 isn’t the first pandemic, after all. The SARS outbreak of 2003 was an expensive lesson for insurers, and experts on the policyholder side say that each time a new catastrophe occurs the insurance industry responds by tightening policies to avoid future liability. “Virus and bacteria isn’t new,” Ruiz says. “That’s why it’s already excluded in most policies. There is some pandemic insurance sold, but it’s very expensive because it would cost a lot to pay the claims.”

Ruiz cites Wimbledon as an example. Organizers of the iconic tennis tournament were willing to pay up for a pandemic specific policy — reportedly as much as $2 million a year in premiums for nearly two decades — and a nine-figure insurance payout is in the works after this year’s event had to be canceled. (One exec told the press it’s “impossible” to get the same coverage for next year, though.)

“You can’t forget about the overall economic reality, which is that if insurance companies were hit with the full brunt of the financial loss caused by the pandemic, it would be debilitating,” says veteran insurance litigator Rich Schoenstein of Tarter Krinsky & Drogin. “The question of allocating the losses that have been sustained in this economic downturn is going to be the subject of litigation for the next five or 10 years. There’s not going to be a one-size-fits-all answer. You’re not going to get a resolution that says insurance policies cover the pandemic or insurance policies don’t cover the pandemic.”

In response to the expected volume of cases, Penn Law professor Tom Baker created a COVID Coverage Litigation Tracker, which paints a fuller picture of lawsuits filed in state and federal courts. “We’re building the plane while flying it,” says Baker, who notes that part of the tech came pre-assembled courtesy of Stanford University’s work involving securities litigation. “We have a lot more data than we’re able to display and we’re working on how to make it more accessible.”

Federal data is easier to compile than state, which suffers from a bit of a lag. But so far, 128 of the cases the Penn COVID coverage tracker is monitoring have seen rulings on motions to dismiss. Insurance companies are winning most of those. “It makes a big difference whether there’s a virus exclusion in the policy or not,” he says, adding that despite the current stats, he’s not convinced the insurers will ultimately come out on top. “I don’t think that the insurance industry is going to crush this litigation. They might crush a lot of small and medium-size businesses that bought the standard policies that had virus exclusions.”

Of the almost 1,500 suits being tracked in the system, more than 400 of the policies had no virus exclusion. Each case will turn on the court’s interpretation of the policy at issue through the lens of each state’s laws. Other key factors in most of the litigation include whether the local government had issued a stay-at-home order and how the court defines “physical damage or loss” in the context of a global pandemic. Historically, that’s been defined in relation to natural disasters. Wildfires and hurricanes, for example, clearly cause physical damage. It’s less obvious whether not being able to use your property because of the novel coronavirus will count as a physical loss — and whether anyone on site actually contracted COVID-19 and/or the business was subject to a stay-at-home order are factors.

“There’s a big open question,” says Schoenstein. “Why can’t you use the space? In some instances, there were government imposed shutdowns and you could not legally use it. In other instances, you may have deemed it unsafe and chose not to use the space or concluded that walk-in business would be so decimated that there’s no point.”

Ruiz is convinced that there aren’t any gaps in the language insurers use at this point, and everything that could potentially occur is either listed as a covered peril or specifically excluded, such as an exception for losses resulting from “virus, bacteria or communicable disease.”

“People complain about the language in insurance policies, which I understand,” Ruiz says. “It’s hard for Joe Policyholder to interpret everything that’s in there, but it’s in there because we are a litigious society and it’s all gone to court.”

Childress argues that if viruses can’t cause property loss or damage, then a virus exclusion would be redundant. “For policyholders who don’t have [the exclusion], it must mean something,” he says. “That’s going to be a pretty big fight.” So far, in suits where there was a virus exclusion, insurers have prevailed on about 87 percent of motions to dismiss. Without that provision, it’s closer to 67 percent.

Experts note, though, that these early cases may not be much of a bellwether. Because so many of the initial plaintiffs are small businesses, the top-dollar megafirms (like Covington & Burling, which represents the MLB) for the most part haven’t suited up for the game, and the attorneys handling many of these smaller cases may not be experienced enough to take on the sophisticated lawyers defending the insurers. “If you don’t have a virus exclusion and you know what you’re doing, you’re not going to lose at these early stages,” says Baker, who suggests being wary of firms that boast having COVID-19 insurance practice groups. “Be sure that the lawyer who says they’re very experienced in insurance hasn’t developed all that in the last six months. You want a lawyer who can tell you about all the insurance cases they’ve done over the past 20 years.”

Mark Geragos, who’s been involved in the litigation both as an attorney and a restaurateur, says state regulators should be stepping in. “Probably the biggest disappointment has been the lack of involvement of the state insurance czars,” he says. “The commissioner of insurance in California has been asleep at the wheel.”

Deputy Insurance Commissioner Byron Tucker tells THR his office in April issued a mandate requiring insurers to follow their contractual and legal obligations to thoroughly investigate the claims after the department received numerous complaints from businesses, public officials and other stakeholders about insurance reps trying to convince policyholders they shouldn’t file a COVID-related business interruption claim or refusing to open and investigate the claims.

“By ordering insurance companies to fully and fairly investigate all business interruption claims, Commissioner [Ricardo] Lara took one of the strongest consumer protection actions in the nation given the limitations of his authority over contract language. California was one of the first states to order insurance data on business interruption claims and losses, which is now a national reckoning,” says Tucker. “With many business policies already containing virus exclusions for the past several years, the courts will have to continue to resolve contract disputes that are beyond the authority of the Department of Insurance.”

Meanwhile, Ruiz suggests Congress should intervene like it did with the Terrorism Risk Insurance Act of 2002 following 9/11. After the attacks, insurers largely either declined to offer coverage for terrorism-related losses or made the policies prohibitively expensive. The TRIA sought to stabilize the market and protect consumers by requiring insurers to offer terrorism coverage to commercial property owners and, in exchange, making the federal government liable for a large share of such losses.

The Pandemic Risk Insurance Act of 2020 was introduced by Rep. Carolyn Maloney (D-NY) in May. Like the TRIA, it makes the federal government financially responsible for the lion’s share of losses arising from a “covered public health emergency,” which is defined as any outbreak of infectious disease or pandemic, if the insurer chooses to offer such coverage. It’s triggered if the participating insurance companies’ aggregate losses arising from a qualifying public health crisis are more than $250 million. Unlike the TRIA, participation is voluntary.

Absent such a program currently, Childress notes that insurance companies are tightening up policies and policyholders should look closely at the fine print when it’s time to renew. “There is no question that and policyholders are seeing in their renewals more frequent virus exclusions,” he says. “People assume they’re renewing under the same terms, but they should be careful to look at their policy to see what’s being added that they didn’t realize.”

It remains to be seen whether legislative relief will come to fruition, and the pandemic has created a backlog in courts, which means a precedent-setting decision likely won’t come anytime soon.

Experts advise staying aware of time limits for filing claims and suing, but for businesses that aren’t facing extinction, waiting to see how courts respond to the novel questions seems like a smart move. “You’re dealing with something that no one outside of a horror movie imagined, and you’re using insurance forms that were developed 40 years ago,” says Sokol. “That’s what we’re dealing with.” 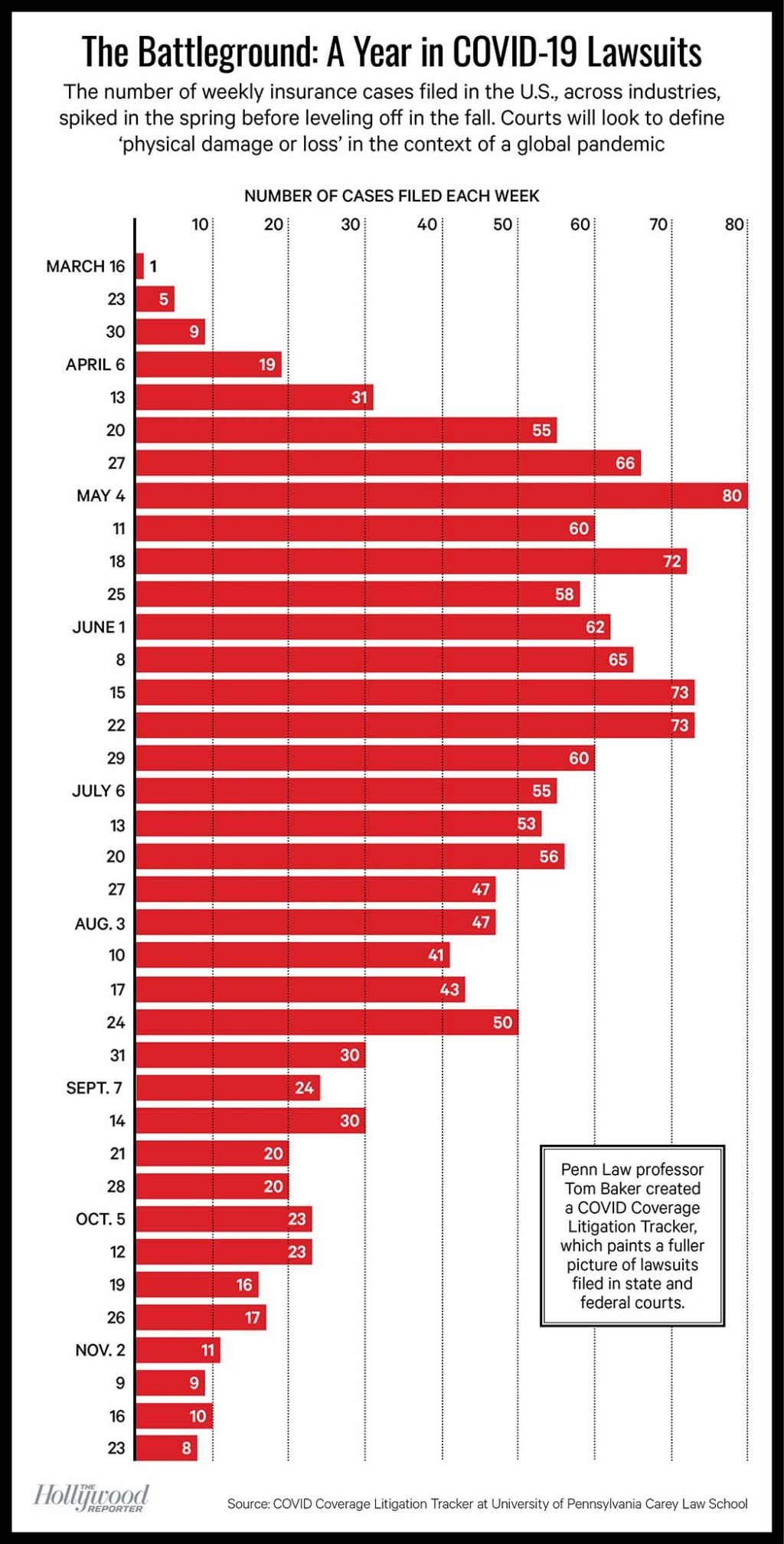 A version of this story first appeared in the Jan. 6 issue of The Hollywood Reporter magazine. Click here to subscribe.