Shortly after Amazon’s May 26 announcement that it was buying MGM in a deal valued at $8.45 billion, Amazon Studios chief Jennifer Salke and her boss Mike Hopkins held a town hall with employees from the Hollywood studio. “They expressed how good this will be for Prime customers and growing their entertainment portfolio,” says one person who attended the virtual session. “And they intend to do theatrical. How this plays out relative to which titles is unclear.”

Afterward, MGM Motion Pictures chairman Michael De Luca and his top lieutenant, Pam Abdy, made calls to producers informing them that “it was business as usual,” per several sources. That is, until a regulatory review is finished and the deal closes sometime next year, possibly in the first quarter. Until then, the film team management structure at both shops will be the biggest guessing game in Hollywood. Ditto for MGM’s future as a stand-alone entity.

'Who's the Boss?' Sequel Lands at Amazon's Freevee

“Amazon is still trying to figure out what they are buying. It will be a process,” a source says. While Amazon has let other acquisitions, such as Whole Foods, remain as stand-alone units, there’s an argument to be made to streamline the studio business — as Disney did when it acquired 21st Century Fox assets — versus keeping Amazon Studios and MGM separate.

Hopkins, who is senior vp Prime Video and Amazon Studios, hinted at plans in the May 26 announcement by calling out the “treasure trove of IP” that “we plan to reimagine and develop.” That library includes 4,000 movie titles — James Bond and Rocky, among them — and 17,000 TV shows. Parsing the release, one insider speculates: “More RoboCop? More Child’s Play? More Rocky? All the above. And maybe even as series.”

Salke, who reports to Hopkins, is widely praised for her TV prowess, but Amazon Studios’ film efforts have been topsy-turvy. Since Salke arrived three years ago, the focus has shifted toward buying more commercially minded titles and tentpoles such as Borat Subsequent Moviefilm, Tom Clancy’s Without Remorse and the upcoming Chris Pratt sci-fi film The Tomorrow War. Some observers see De Luca working complementary to Salke, while others see him signaling that he would like to run all of the film unit. Still others say that De Luca has a history of chafing with oversight from above, and that could send him to the exit. MGM declined to comment.

De Luca, who knew MGM was being shopped when he arrived two years ago, has been on a spending spree, stocking the company’s pantry with A-list projects like Ridley Scott’s House of Gucci, with Lady Gaga and Adam Driver. And the company spent well into the $70 million range to acquire Adrift, with Darren Aronofsky, Jared Leto and Jason Blum, a deal that surprised even well-pursed Netflix execs who lost the package. MGM also paid $55 million to pick up Combat Control, a drama with Jake Gyllenhaal and director Sam Hargrave, and also nabbed Paul Thomas Anderson’s latest as well as Ron Howard’s Thai cave rescue drama.

“Everybody knew he spent like crazy. He was beating streamers. This was a unique moment at MGM,” says one rival studio executive. Adds another rival, “He’s done a good job and made MGM competitive.” The ability to build a varied slate would well serve a content-hungry, deep-pocketed streamer like Amazon Prime.

James Bond, co-owned by MGM and Barbara Broccoli and Michael G. Wilson’s London-based Eon production house, no doubt is MGM’s most valuable franchise, albeit a complicated one. MGM has full distribution rights, but Eon has full control over what gets made. The 25th Bond film, No Time to Die, which is set to open in the fall, isn’t impacted because Amazon won’t own MGM by then.

The morning of the Amazon-MGM announcement, EON issued a statement saying Bond films would remain theatrical in an attempt to douse rumors that 007 would become the sole property of Amazon Prime: “We are committed to continuing to make James Bond films for the worldwide theatrical audience.”

MGM has made it clear there will be no changes to the studio’s 2021 theatrical slate, which is handled by subsidiary United Artists Releasing. That includes the Aretha Franklin biopic Respect, starring Jennifer Hudson (Aug. 13); The Addams Family 2 (Oct. 1); No Time to Die (Oct. 8); House of Gucci (Nov. 24); Joe Wright’s Cyrano (Dec. 24); and an untitled Paul Thomas Anderson feature that expands nationwide Dec. 26. Also, sources tell THR that Amazon has OK’d giving some of MGM’s 2022 titles a proper theatrical release versus an immediate berth on Prime. (Creed III comes out in November 2022.)

Day-to-day work is expected to stay the course for now. “Fox didn’t stop working on movies when Disney said it was buying them,” notes one producer. “The same will go for MGM.” 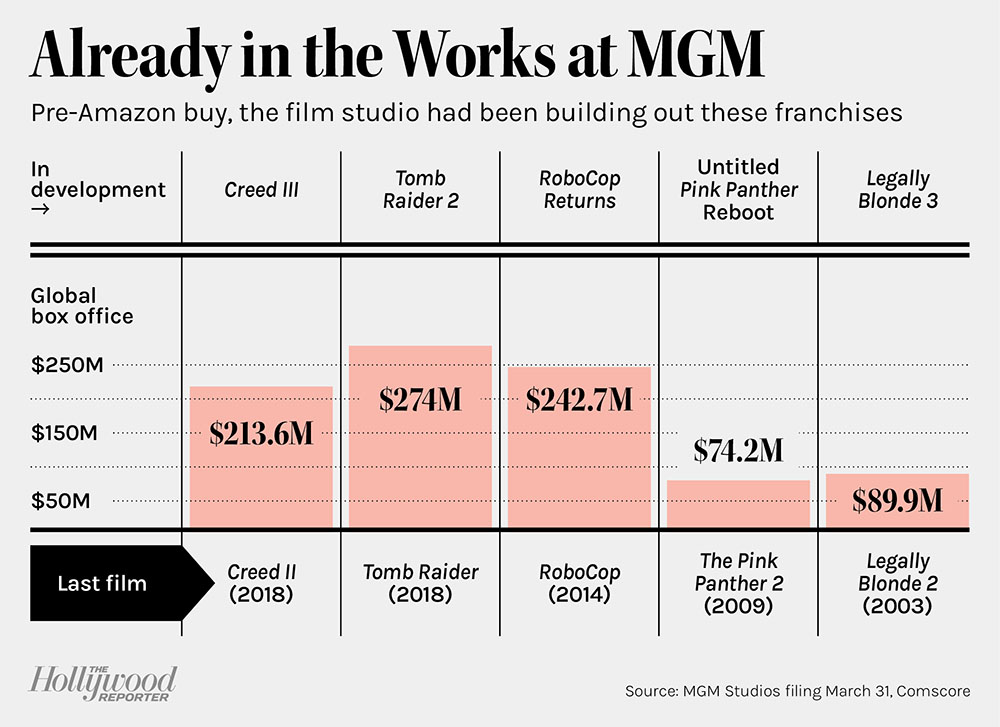