Host, a 56-minute-long horror film about six friends who hold a Zoom seance during lockdown, may not have received the same broad attention as, say, the Disney+ hit The Mandalorian. But it struck a chord with subscribers of AMC Networks’ genre streamer Shudder after its summer premiere. “It was lauded in those circles,” AMC Networks CEO Josh Sapan told investors in November. And that is all that counts for the company’s streaming strategy, which takes a tack that’s different from those of bigger rivals.

Unlike deep-pocketed Netflix and Amazon Prime and Hollywood giants, which have created mega services like Disney+, Paramount+ and HBO Max that vie for broad-based hits and big subscriber numbers, AMC Networks has been betting on its smaller, more focused streamers. Its goal: to differentiate itself and avoid becoming a casualty of an escalating programming arms race amid the streaming wars.

Sapan, in an interview with The Hollywood Reporter, likened AMC’s approach to owning a series of “specialty boutiques’’ rather than the streaming equivalent of a department store. “We believed we could have a thriving, successful business if we were truly complementary and distinct,” says the executive, 70, who has been CEO since 1995 (when AMC was known as Rainbow Media and owned by Cablevision, which spun it off in 2011) and currently has a contract through the end of 2022.

The company is also having success with two other streamers it acquired from mogul Robert Johnson’s RLJ Entertainment. One is Acorn TV, which focuses on British and international mysteries and dramas (Bloodlands, Midsomer Murders) and which Sapan last year described as AMC’s “largest” streaming service (though the company doesn’t break out subscriber numbers). The other is Black series and film destination ALLBLK, formerly called UMC (Millennials, Double Cross).

AMC’s streamers typically cost $5.99 or $6.99 a month each and feature a mix of licensed and original content. Last year, it also launched, for $8.99 monthly (or $6.99 for people who have AMC as part of a pay TV subscription), AMC+, a “best-of-network” streaming bundle offering “prestige drama and epic worlds,” including The Walking Dead. Some brands are bundled in with AMC+, along with being offered separately (Shudder); others are offered entirely as stand-alone services (Acorn TV).

With AMC Networks’ burgeoning streaming business exceeding its 2020 targets and reaching more than 6 million subscribers, which it expects to more than triple by 2025, it has drawn some praise from Wall Street. “Real momentum,” “surprisingly strong” and “optimism for future growth potential” were some of the analyst comments after a late February earnings call, during which Sapan touted AMC as “the worldwide leader in targeted streaming,” which is now “the most significant growth area of our company.”

Sapan says that the niche streaming focus allows for high engagement and lower subscriber churn — Acorn has “among the lowest churn” of any U.S. streaming service, he told analysts recently, citing users’ “dedication and affinity” and a steady stream of content — without the need “to get to 150 million subscribers” or “to go take over the world.” The exec adds, “Not that there’s anything wrong with that.” But his team is instead focusing on more targeted bets. “You’re not competing in multiple categories to get everyone. Each thing is not a moonshot,” Sapan notes. Host, for example, “was made all remotely with in-home devices, so it is inherently much more economic.”

Sapan says, without sharing specific figures, that some of AMC’s streaming services are “already profitable.” And he sees subscriber and financial momentum keeping up in the U.S. and abroad, where the network plans an accelerated rollout. AMC management said its streaming annual revenue run rate had risen in December to about $300 million. Given the firm’s total 2020 revenue of $2.8 billion, that would mean streaming contributes more than 10 percent. And Sapan has said streaming will be the firm’s largest revenue segment by 2025.

Wells Fargo’s Steven Cahall has estimated that streaming will account for 37 percent of company revenue by 2025 and noted that “success in direct-to-consumer is key to the stock’s valuation.” Macquarie analyst Tim Nollen in a recent report stressed that for niche streamers, “there are more synergies and cheap content they can produce as they are the clear leaders in their various niches.” This allows them to turn “quite profitable in the nearer term.”

RBC Capital Markets analyst Kutgun Maral in a report forecast that AMC’s streaming business would break even in 2022 and in 2025 reach a profit of around $229 million on revenue of $1.15 billion. He called streaming “a meaningful opportunity in the context of AMC Networks’ relatively smaller scale and market cap.” And the analyst argued: “AMC stands to be one of the first beneficiaries of a likely narrative shift of media companies getting credit for their direct-to-consumer effort.”

With its focus on passionate niche audiences, AMC also believes it is well positioned for what analysts expect to be a culling of streaming services in the next few years as households’ total subscription costs increase. “We want to get people’s passions with a clear proposition and have them served, because we do believe that there will be multiple streaming services in each household,” Sapan says. “There will be competition for the consumer wallet, and we don’t want to compete with another big ‘here’s everything’ store. We want you to understand what [our niche brand] is, like it, identify with it, be satisfied with it and continue to buy it when you buy multiple other ones. So everything we do will be focused, defined and highly curated.”

When asked, Sapan doesn’t rule out the possibility of AMC acquiring more niche streaming services. “I wouldn’t say no, but there’s no immediate plans,” he notes, adding that the company has a “pretty full plate at the moment.”

It may also be that AMC’s traditional choosiness is tailor-made for the streaming age, its boss believes. “We have always been about curation and about doing things selectively,” Sapan says. “We were making bingeable material — everything from Mad Men to Breaking Bad — before it was bingeable.” 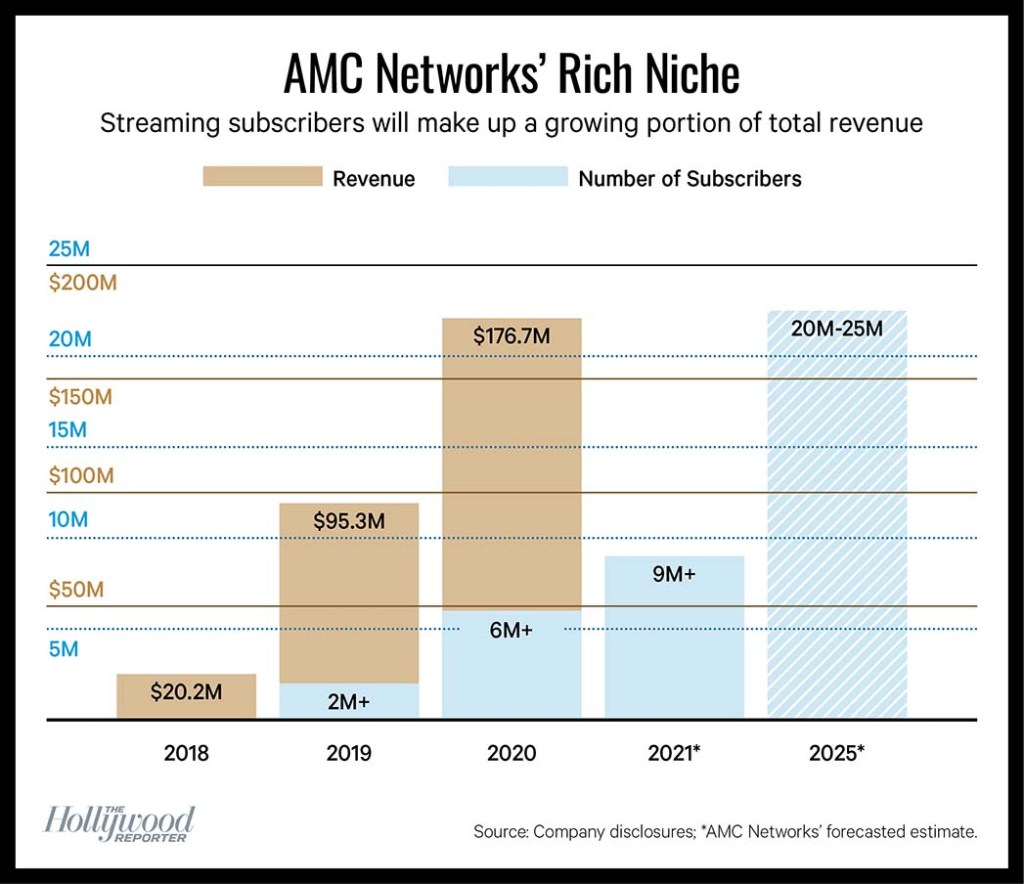