A year ago on April 28, comedian Michelle Wolf took the stage in front of top media executives, stars and correspondents at the Washington Hilton Hotel and roasted the obsessive single-mindedness of cable news, among many other Trump era issues.

“There’s a ton of news right now; a lot is going on, and we have all these 24-hour news networks, and we could be covering everything,” began Wolf’s setup at the White House Correspondents’ Association’s gala. “But, instead, we’re covering, like, three topics. Every hour, it’s Trump, Russia, Hillary and a panel of four people who remind you why you don’t go home for Thanksgiving.”

Wolf’s scathing take on the media industry (and jabs at the president’s team) likely played a role in the WHCA breaking its annual tradition this year of having a comedian monologue as the centerpiece of the evening. But the sentiment of the cable news quip may be shared by many Americans, who perceive local news and network news outlets like ABC and CBS to be more credible than cable news outlets like CNN, MSNBC and Fox News, a new Hollywood Reporter/Morning Consult poll finds. 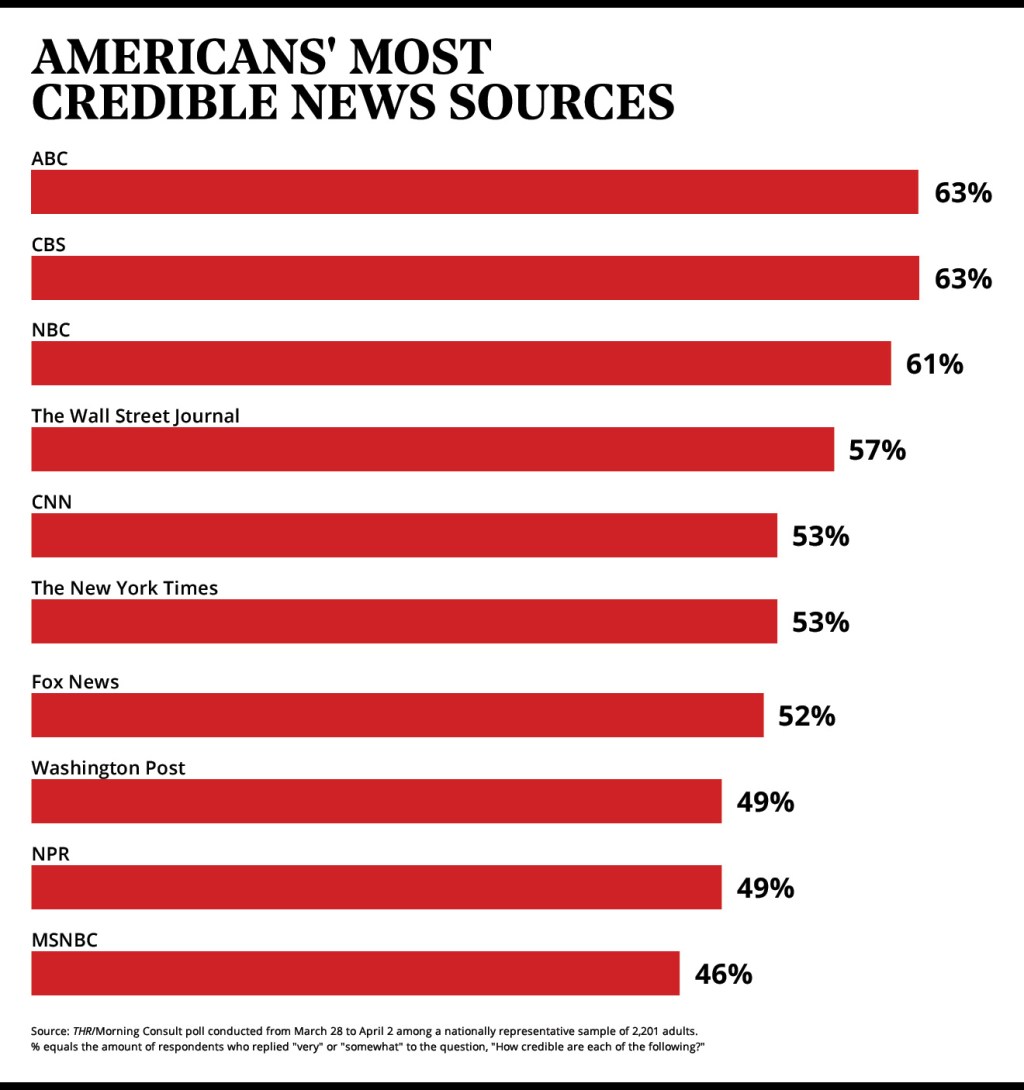 On the flip side — and perhaps heightened by President Trump’s infinite “Fake News” refrain — 23 percent of respondents now perceive CBS and NBC to be not credible, while 22 percent think the same of ABC. About 57 percent of Americans say they worry, at least sometimes, that what they hear about on the network news isn’t accurate. “President Trump’s relentless rhetoric on the mainstream media has helped shape how those mediums are viewed among his base,” notes Tyler Sinclair, Morning Consult’s vice president.

As for cable news outlets, 53 percent of Americans think CNN is credible while 52 percent think the same of Fox News. Some 46 percent of respondents replied that they found MSNBC to be credible. Asked whether “the pressure to fill time leads to unnecessary segments on cable news,” about 66 percent of Americans replied that they did think there was a lot of filler on 24/7 news networks. (So far this year, in the 9 pm ET/6 pm PT time slot, Fox News’ Hannity tops cable news with 3.12 million average viewers, while MSNBC’s The Rachel Maddow Show follows with 3.06 million and CNN’s Chris Cuomo Prime Time trails at 1.29 million.)

The THR/Morning Consult survey also looked at Americans’ perceptions of news outlets’ political leanings. Among the 11 national news outlets in the survey, respondents thought only one of these brands, Fox News, leaned “more conservative” than liberal. Network news channels like ABC, CBS and NBC, which strive toward impartiality in their reporting, were perceived by a significant margin to be “more liberal” in their political lean than neutral. 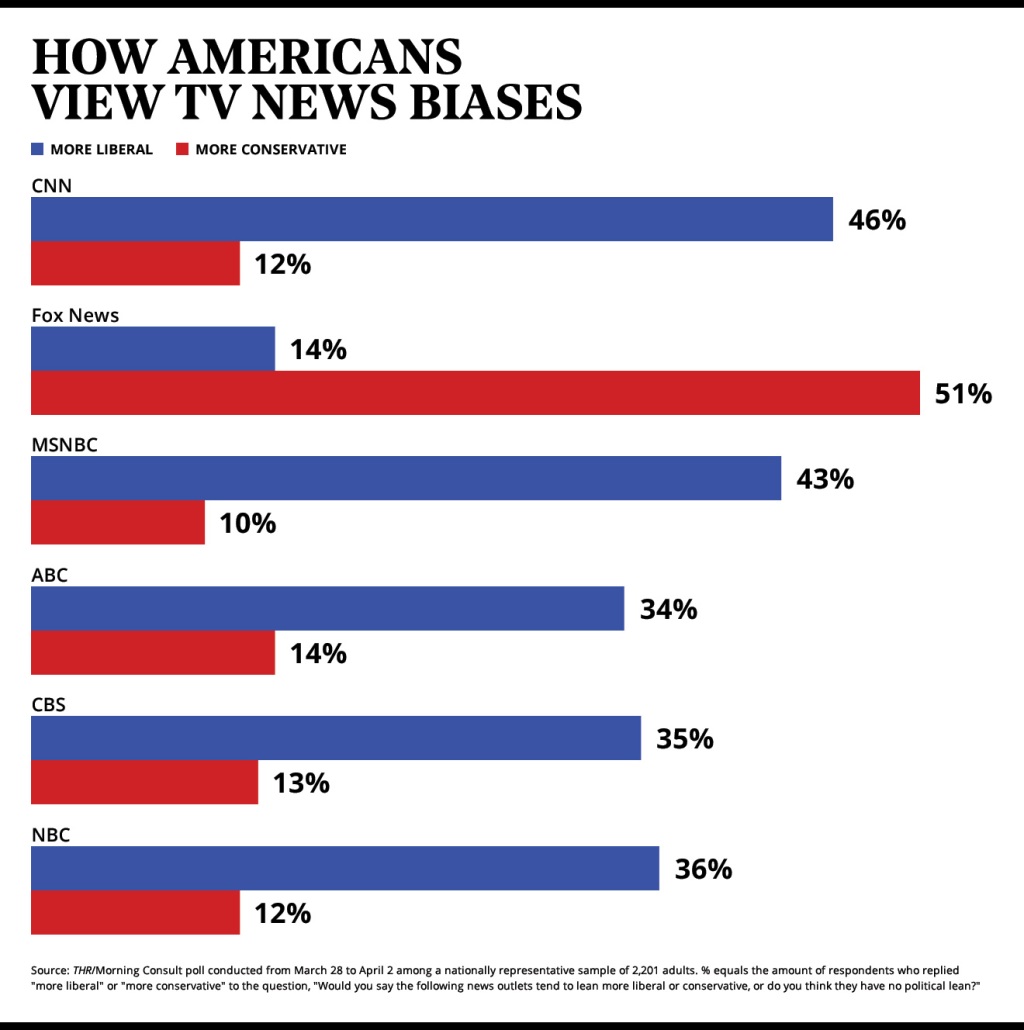 And when national newspapers do label their reporting as “opinion,” more Americans, about 49 percent, trust the conservative-leaning Wall Street Journal‘s op-ed page more than the columns and editorials from The New York Times or The Washington Post.

In the survey, conducted among a nationally representative sample of 2,201 adults from March 28 to April 2, more Americans said they turn to network news as their daily news source over radio, cable, podcasts and newspapers. The most-turned-to platform for news was, unsurprisingly, social media, with 45 percent of Americans saying they find news there daily.

“That a significant number of people polled say they rely on social media — daily and weekly — for their news, and in equally large numbers say they worry about accuracy of news they get from social media, reflects how brands such as Facebook have hurt the news consumption ecosystem, not just in siphoning off revenue but simultaneously helping erode trust with poorly designed and terribly managed platforms,” notes Raju Narisetti, a former News Corp. executive who is now a professor at Columbia University School of Journalism.

Narisetti adds, “It is a fatal, self-reinforcing blow that will only deepen as American local media continues to dry up. I am less worried about poll data on individual news brands because it also represents the overall noise around some of these brands, be it Fox News or The New York Times, as well as the fact that many of the same people don’t necessarily grasp that much of what they actually read on social media originates from original reporting in mainstream brands.” 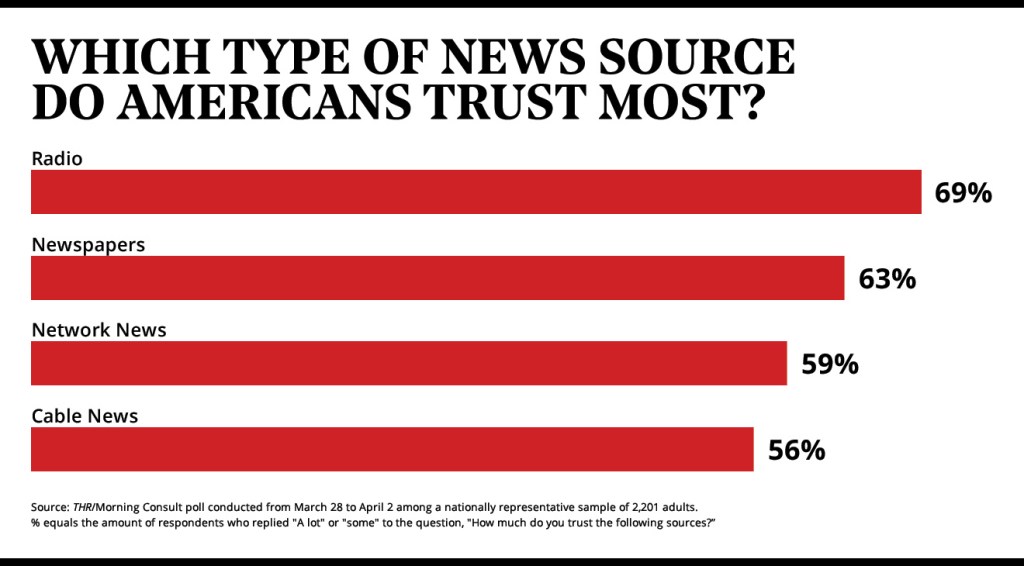 More Americans find what they hear on the radio — a platform dominated by conservative-leaning talk shows and centrist NPR stations — to be more trustworthy information than what they read in newspapers, or see on network or cable news or hear on podcasts.

The most trusted news resource in the survey was an unnamed publication: “your local news,” with 75 percent of respondents saying that these sources had credibility in their view. Perhaps because of the wording, that response reminds of national polls where Americans generally give Congress in general low approval ratings but give their own local congressperson higher marks.

“The poll confirms the disturbing but not surprising fact that our polarized public discourse has eroded trust in mainstream journalism. The most striking exception is local news,” notes Andrew Heyward, formerly the president of CBS News and currently at ASU’s Walter Cronkite School of Journalism. He adds, “That’s why it’s so important to shore up the dismal economics of local print and digital journalism and reinvent local TV news for the next generation of news consumers.”

Despite misgivings about the trustworthiness and credibility of TV news, when respondents were asked to agree or disagree with a simple statement — “I enjoy watching the news” — about 56 percent replied affirmatively. 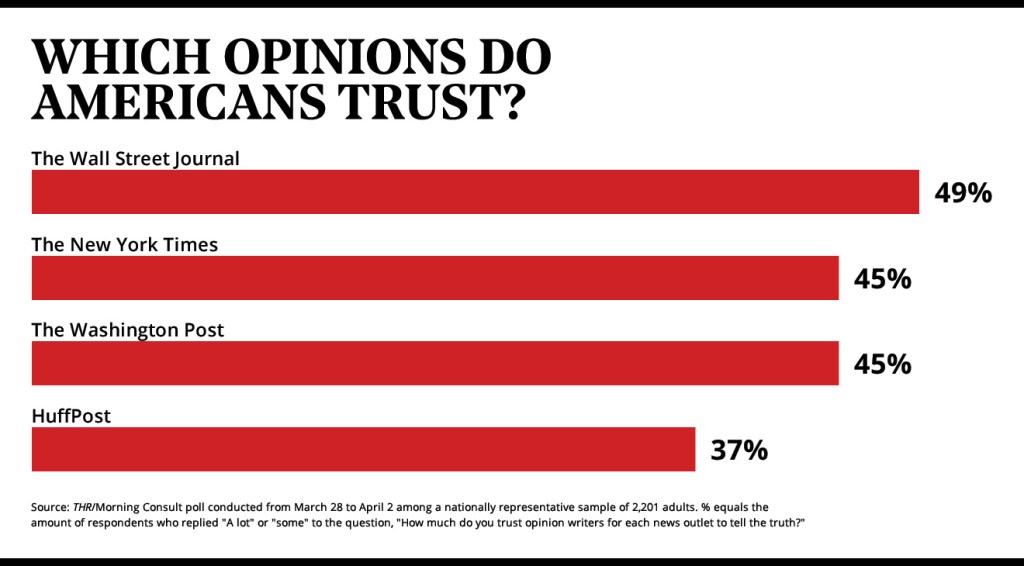