The estate of pop art icon Andy Warhol is suing a photographer to protect his legacy from her claim that he copied her photo of Prince, according to a lawsuit filed Friday in New York federal court.

In 1984, Warhol painted a series of portraits of Prince and, according to the suit, he “drew inspiration from and transformed a publicity photograph” of the artist that was in circulation at the time. Now, three decades later, the estate claims photographer Lynn Goldsmith is complaining that the works, a sample from which is below, violate her copyright in the original 1981 photo.

So, the estate is striking first. It is seeking a declaration that the Prince series does not infringe on Goldsmith’s work, that the works in the series are transformative and protected by fair use and that any potential copyright claims are barred by the statute of limitations and the doctrine of laches.

“Although Warhol often used photographs taken by others as inspiration for his portraits, Warhol’s works were entirely new creations,” writes attorney Luke Nikas in the complaint. “As would be plain to any reasonable observer, each portrait in Warhol’s Prince Series fundamentally transformed the visual aesthetic and meaning of the Prince Publicity Photograph.” 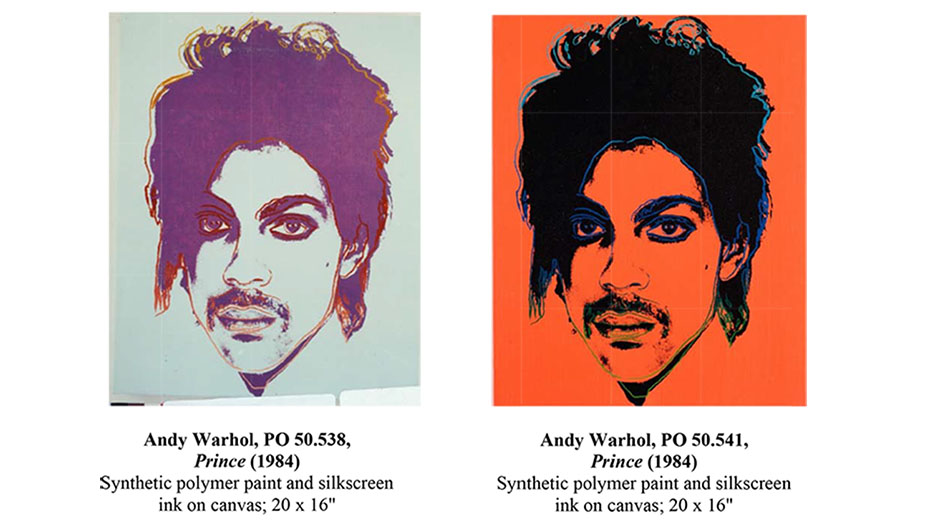 As one example, which is demonstrated visually in the complaint, Nikas argues that Warhol’s Prince is wearing “substantially heavier” eye makeup than the artist is in the photo.

Plus, the estate argues, Goldsmith has known about the series since at least 1984 because she granted a license to Vanity Fair for use of one of the Warhol images on its cover. According to the complaint, though, the photographer has claimed she didn’t learn about the pop art adaptations of her work until Conde Nast published a special issue called The Genius of Prince in 2016 and used the image as its cover.

“Despite knowing that Warhol’s portraits are a protected fair use, Defendants have attempted to extort a settlement from the Foundation,” writes Nikas, who also cites Goldsmith’s own Facebook post as proof she was aware. In Jan. 2015 she wrote, “It is a crime that so many ‘artists’ can get away with taking photographers images and painting on them or doing whatever to them without asking permission of the ‘artist’ who created the image in the first place.”