Amid a wave of M&A fever, will Amazon’s $8.45 billion takeover of MGM prompt its Silicon Valley rival Apple to refresh its shopping list to include a Hollywood studio?

The iPhone maker already has a giant footprint in entertainment through its services division — which includes Apple TV+, Apple Music, the App Store, iCloud and more. Its revenue topped $16.9 billion in the first quarter, up from $13.3 billion in the year-ago period, and the tech giant boasts 660 million paid subscribers in total.

And CEO Tim Cook has described streamer Apple TV+’s ambition as becoming “one of the most desired platforms for storytellers,” singling out comedy series Ted Lasso, drama The Morning Show and the miniseries Defending Jacob as its titles with “significant buzz.”

'Who's the Boss' Sequel Lands at Amazon's Freevee

But the streamer is seen by some Wall Street analysts as lacking multiple, regular breakout hits, which has led some to argue for a studio acquisition. Morgan Stanley research released in April found only 8 percent of U.S. respondents said they use Apple TV+, a figure that lags far below Netflix (58 percent), Amazon Prime (45 percent) and Disney+ (31 percent).

“Apple has made a major strategic mistake not buying a Hollywood studio while Amazon, Disney, Netflix and others run away with content,” Wedbush analyst Dan Ives says. “Content is king, and Apple built a mansion with hardly any furniture in it. MGM was a no-brainer acquisition for Apple, and they missed a huge opportunity.”

Hal Vogel, CEO of Vogel Capital Management, suggests that Cook is “afraid of shareholder blowback if he goes Hollywood in a big way.” 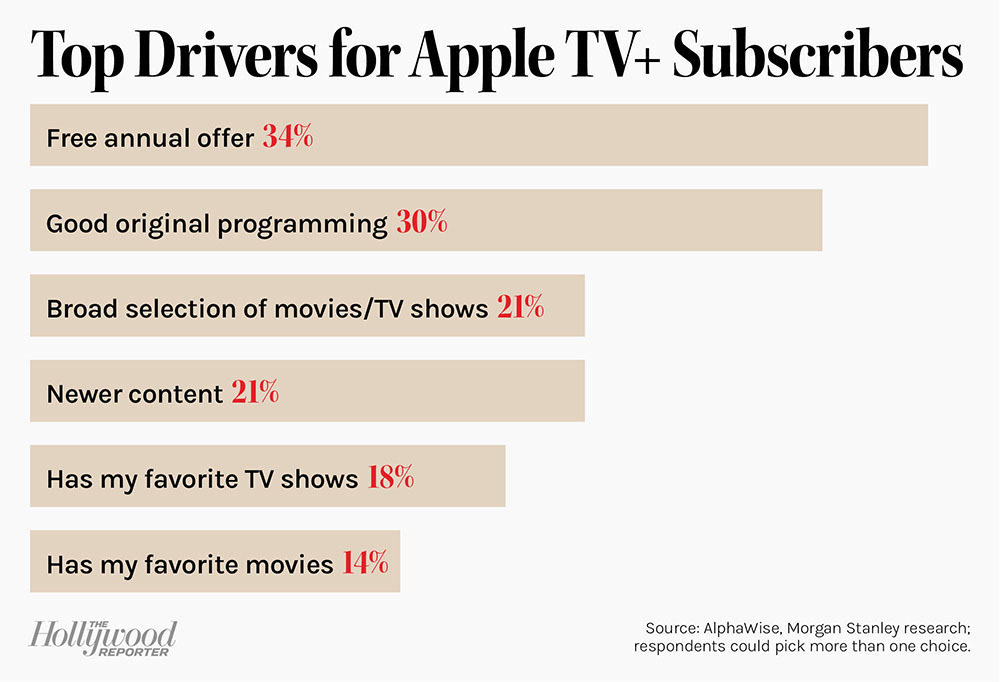 The likes of Apple, Alphabet’s Google and Facebook are often cited as cash-rich tech titans that could gobble up Hollywood studios without much financial trouble. But two of them also have signaled their lack of sustained interest in more traditional premium content production. Facebook and Google’s YouTube already tried plotting bigger scripted content pushes, then scaled back their ambitions.

But AT&T’s $43 billion deal to merge WarnerMedia with Discovery and Amazon’s MGM buy underscores the “intensifying streaming wars as a potential catalyst for the next wave of industry consolidation, with some of the big tech companies increasingly seen as potential acquirers,” CFRA Research analyst Tuna Amobi says.

Apple could choose to ramp up its Hollywood division with a mega buy of a studio the size of, say, Lionsgate, which gets mentioned as a possible takeover target given its relative lack of scale — Lionsgate’s market cap is $3.8 billion, while Apple’s is $2.1 trillion — as well as its 17,000-title library and film and TV franchises like Hunger Games, Twilight and its Starz drama Power.

“Apple and Amazon are unique among tech giants, insofar as they each have streaming services, so there are synergies in owning content libraries,” notes Wedbush analyst Michael Pachter. Or it could follow Netflix’s lead and look to snap up smaller Hollywood shingles — like Mark Millar’s comic book company Millarworld — to bulk up its intellectual property ownership.

“Amazon’s smart acquisition of MGM will spur studio M&A by its big tech streaming competitors [that] now face a crisis of content,” says Peter Csathy, chairman of advisory firm CreaTV Media. “Netflix is in search of franchises. Apple, too. Even Amazon may not be done yet — for both offensive and defensive reasons.”