At the start of 2021, L.A. residents used to the city’s biannual proliferation of “For Your Consideration” billboards needed only to look skyward for reminders they were still living in unprecedented times.

The prevalence of out-of-home advertising (which comprises billboards, bus, bench and other outdoor ads) hawking titles vying for Golden Globes, Oscars and other awards decreased noticeably, observers say, at a time when many industry voters still weren’t venturing far from home, forcing campaigners to seek alternate ways to reach them, and the awards season became longer and more drawn-out.

Out-of-home advertising was “one of the first things to go for me this year because I just don’t see the benefit that we would normally see from that kind of targeted outdoor [push],” says one veteran awards campaigner who spoke on condition of anonymity. “Ultimately, it’s about getting people in their homes now,” adds awards agency Licata & Co. chairman and CEO Richard Licata. “There wasn’t that race to be the first out the door this year,” says Jason Morgan, founder of the Daily Billboard blog, which chronicles L.A.’s sky-high ads. 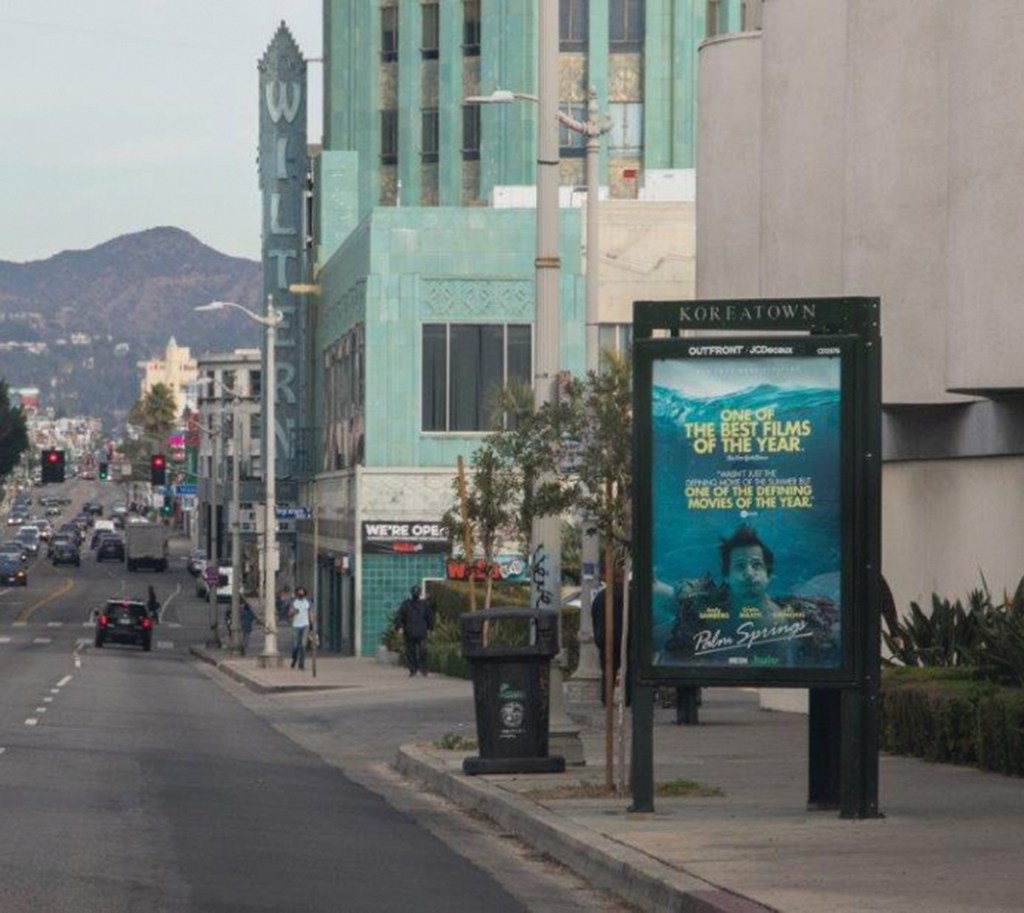 These muted billboard campaigns aligned with last year’s plunge in entertainment outdoor ads: Out-of-home revenue in the cinema sector dropped 90 percent in 2020, trade association The Out of Home Advertising Association of America (OAAA) reported in March, as theaters shuttered and studios pushed back film release dates.

Still, industry observers say the FYC billboard market is picking up at the end of this year’s awards season as L.A. traffic has returned to pre-pandemic levels, movie theaters have reopened (albeit at reduced capacity), and distributors are making last-minute awards pushes before the Oscars ceremony April 25.

“I’m seeing way more FYC billboards now than I was noticing two months ago,” says the veteran awards campaigner. Adds Licata, “It kind of glacially came back” and is set to pick up for Emmy season, for which he predicts buying will be “back in full swing.”

According to the L.A. office general manager at outdoor media giant Outfront Media, Bryan Canley, five major studios booked FYC billboards in the L.A. area this season. “While there are fewer requests this year due to a reduced number of premieres, entertainment clients are still running and promoting their campaigns on billboard and transit assets,” he said in a statement. “Entertainment brands continue to gravitate to OOH for FYC impact in the LA scene and to raise awareness for these best in class shows.”

Billboard rates, which dropped between March and July 2020, have “pretty much gone back to normal” since August, says Sam Keywanfar, founder and CEO of out-of-home media-buying platform MilkMoney Inc., which has worked with Def Jam and Netflix.

One of the bright spots of this FYC season — and during the pandemic as a whole — for out-of-home companies has been sustained revenue from streaming companies as major studios cut back. “The streamers are still very active — Netflix, Hulu and Amazon, but not much else,” says Morgan. Candice Simons, president and CEO of Brooklyn Outdoor, an outdoor advertising agency that has worked with Amazon, says her company saw “an increase in FYC coverage in the streaming category” in 2021 compared to past years, while seeing a decrease in theatrical FYC marketing. Simons believes streaming platforms will continue this investment in FYC advertising and that there will be a “major street fight” for out-of-home placements when studios return to their usual billboard placements. Overall, per the OAAA, the only entertainment company in the trade association’s top 100 advertisers category that actually increased its out-of home spending during the pandemic in 2020 compared to 2019 was Quibi, the quickly shuttered shortform video platform, which didn’t even launch until April 2020.

With the pandemic downshift in FYC outdoor advertising also came a change in the locations of billboards. It made less sense to buy placements around typical industry voter hubs like the Directors Guild of America and the ArcLight Hollywood early in 2021 because of reduced traffic and people viewing films in their homes in lieu of in-person screenings, the veteran awards campaigner says.

During the pandemic, some major talent and executives — whom distributors typically target by placing vanity billboards near their homes or along their commutes in L.A. or New York — also left city centers. As a result, Brooklyn Outdoor’s Simons says FYC advertisers are more open to placing ads in the suburbs than usual. She says, “As people are traveling less, they want to target the executives and key areas where they live.”

But as the country continues to emerge from the pandemic, some say that in this FYC season, out-of-home buys remain important, especially to promote digital marketing. “Billboards, as much as they are flashy and they do actually send a message that is important, it’s the digital touchpoints that support that,” says Natalie Hapgood, a senior brand planner at Jellyfish, which has previously worked with Disney and Spotify. “It’s still a nice look if you can get the artist out front taking a selfie with it and you can turn that into a digital touchpoint” — in other words, have talent share their billboard on Instagram or Twitter.

With shares on social media, a company may need only one or a few interesting billboards to make an impact. “It’s not about quantity this year, it’s more about the quality,” says media-buying agency Dash Two founder Gino Sesto. “Five years ago, people would just blast the streets with the same stupid creative, but now it’s like, ‘Work smarter, not harder.’ “