Comcast, Charter and Verizon quarterly subscriber figures are coming in slightly better than Wall Street had expected. But in an ominous sign for AT&T’s push to become an entertainment powerhouse — it spent $85 billion to acquire TimeWarner in 2018, after all — satellite television provider DirecTV has come up short, with even its supposedly high-growth skinny bundle streamer, DirecTV Now, losing subs.

Launched with fanfare in late 2016, the streaming service with up to 125 channels of live TV grew its subscribers to 1.86 million as of Sept. 30, but in the fourth quarter recorded its first subscriber drop ever. Analysts were stunned by the loss of 267,000 streaming users (on top of a loss of 403,000 at the traditional DirecTV satellite service) reported Jan. 30, given that the consensus forecast was for a 19,000-sub drop after AT&T management had late in the year forecast a decline, citing the need to end promotions that attracted low-end customers.

“In the wake of a price increase in July, the growth of their DirecTV Now subscriber base slowed sharply. In the fourth quarter, it collapsed,” says MoffettNathanson analyst Craig Moffett. “Nobody expected this.”

AT&T chairman and CEO Randall Stephenson explained on a Jan. 30 conference call that “there was a customer segment at the low end, very promotional pricing, who are not engaging on the product.” Excluding these 500,000 users who paid only $10 a month, he said the “remaining customer base is growing.” AT&T said eliminating these low-end customers boosted average revenue per streaming user in the fourth quarter by $10 from the third.

But “the concern is the magnitude of video unit losses,” says Cowen & Co. analyst Colby Synesael. AT&T did manage to add 12,000 users to its IPTV service U-verse, but its total U.S. pay TV subscriber loss in the fourth quarter was a whopping 658,000, and more pain is on the horizon.

Pure streamers, like Netflix, which does not offer live TV, are faring much better — Netflix added 5.4 million subscribers in the U.S. in 2018, more than in any year since 2013 — one reason AT&T’s WarnerMedia, along with Disney and NBCUniversal, are building Netflix-like services of their own.

MoffettNathanson analyst Michael Nathanson notes that “pay TV sub declines have missed our colleagues’ estimates by over 400,000. Through three earnings reports, aggregate video subs are down 733,000, and that doesn’t include Dish yet!” 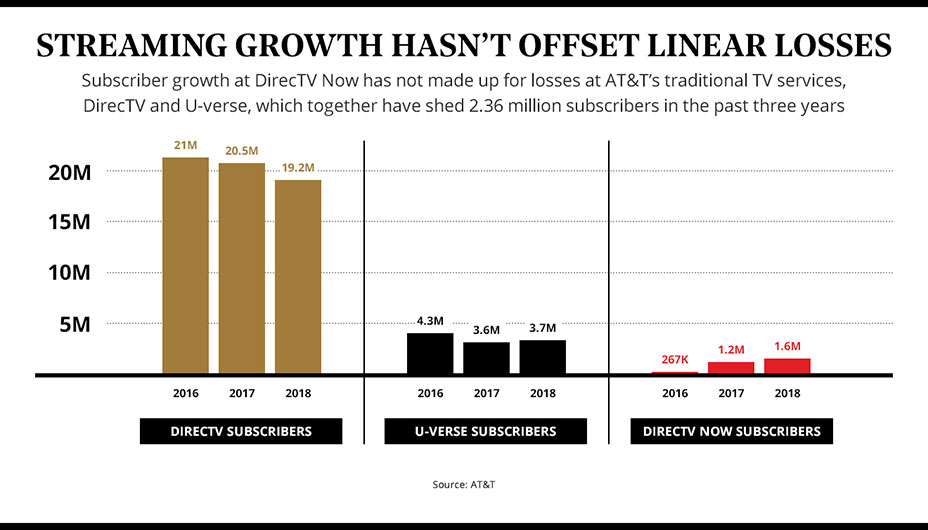 This story also appears in the Feb. 6 issue of The Hollywood Reporter magazine. To receive the magazine, click here to subscribe.