Continue to The Hollywood Reporter SKIP AD
You will be redirected back to your article in seconds
Skip to main content
March 29, 2021 2:25pm
Logo text

In the rough-and-tumble digital world, things sometimes get quite nasty. Want proof? Well, put it this way: If aliens were to swoop down from outer space tomorrow, and one wanted to show these extraterrestrials that Earthlings know a thing or two about being vulgar, a 64-page ruling just out from federal court is an excellent starting point. The opinion concerns a feud between Barstool Sports and Michael Rapaport and could become an instant classic — if not for the photoshopped picture of anal sex on page 7, then at least for a judge’s discussion on whether calling someone a racist and taunting that person with a custom-made T-shirt implying an STD rises to actionable defamation. Ultimately, Barstool escapes Rapaport’s libel claims, even if the bro network headed by David Portnoy is still facing the prospect of a trial on the issue of whether his talent contract was breached or excused by a morals clause.

'RuPaul's Drag Race' Winner Willow Pill on Historic Win: "This Is My Future and Reign, and It Goes How I Want It to Go"

The decision from U.S. District Court Judge Naomi Reice Buchwald comes at the summary judgment phase — and the 64 pages reflects the intricacy of the saga more than the complexity of any legal issue.

In 2014, Rapaport extended his brand to podcasts, specifically, I Am Rapaport, which he hosted for CBS Radio.

Three years later, Barstool Sports successfully recruited Rapaport. The actor agreed to do video “rants” posted online, a podcast and other specials. In exchange, Rapaport got hundreds of thousands of dollars, revenue sharing, and a contractual promise that Barstool would make “good faith efforts” to get him his own show on SiriusXM.

The relationship lasted no more than eight months.

Rapaport and Barstool’s employees got into a heated war on social media. There were plenty of memes. Eventually, the final straw came when Rapaport tweeted, “If you call yourself a fucking stoolie for real, you’ve already lost in life.”

For insulting Barstool’s fan base, Rapaport was fired, although he claims that Barstool engineered a “coordinated assault” to get out of the existing talent agreement.

“Whether the evidence demonstrates that Rapaport’s tweet actually brought Barstool into public disrepute and thus permitted Barstool to immediately terminate the Talent Agreement is a disputed issue of material fact that must be resolved by a jury following trial,” writes Buchwald, also concluding that a jury should also decide other contractual issues including whether Barstool truly made “good faith efforts” to get Rapaport a SiriusXM show. “This is not the rare circumstance in which a party’s motives and good faith efforts can be determined as a matter of law at the summary judgment stage.”

The highlight of Buchwald’s decision — not counting the photo of Rapaport enacting a Deliverance impression on Portnoy — is with regards to the defamation claims.

First, there’s the category of statements where Rapaport is called a “racist,” a “hack,” a “wannabe,” and a “liar.”

“As used here, these labels represent nothing more than the Barstool Defendants’ subjective evaluations of Rapaport that are incapable of being objectively proven true or false,” writes the judge. “For instance, the observation that someone is ‘racist,’ i.e., someone who believes that racial differences produce an inherent superiority of a particular race, will almost always depend on the eye of the beholder.”

Next comes statements — often in meme form — that characterize Rapaport as having herpes, or being a stalker, or committing domestic abuse. In other words, these are more than opinions. Each is capable of being proven true or false. But just because Rapaport has introduced evidence demonstrating he tested negative for herpes and evidence that he has never been convicted of stalking doesn’t necessarily mean these statements equate to defamation. Especially not in the context of Barstool Sports.

The “context suggests that audiences would readily recognize the challenged statements as representing the (often overtly biased) viewpoints of the Barstool Defendants,” continues the judge. “[T]he statements were largely laden with epithets, vulgarities, hyperbole, and non-literal language and imagery; delivered in the midst of a public and very acrimonious dispute between the Barstool Defendants and Rapaport that would have been obvious to even the most casual observer; and published on social media, blogs, and sports talk radio, which are all platforms where audiences reasonably anticipate hearing opinionated statements.”

Finally, 48 pages into the ruling, we get to the question of a Barstool-designed and -sold shirt featuring an artistic rendering of an actual photograph of Rapaport with a red lesion under his lip, which Barstool illustrated by adding a clown nose. To which, Buchwald writes, “While hardly flattering to Rapaport, this image standing alone is not actionable because a reasonable audience would not understand the shirt to be asserting as a fact that Rapaport has herpes.”

Barstool is repped by attorneys Aaron Moss, Ricardo Cestero and Steve Stein while Rapaport’s side is being handled by Richard Busch.

Here’s a photo of the shirt followed by the rest of the 64-page opinion. 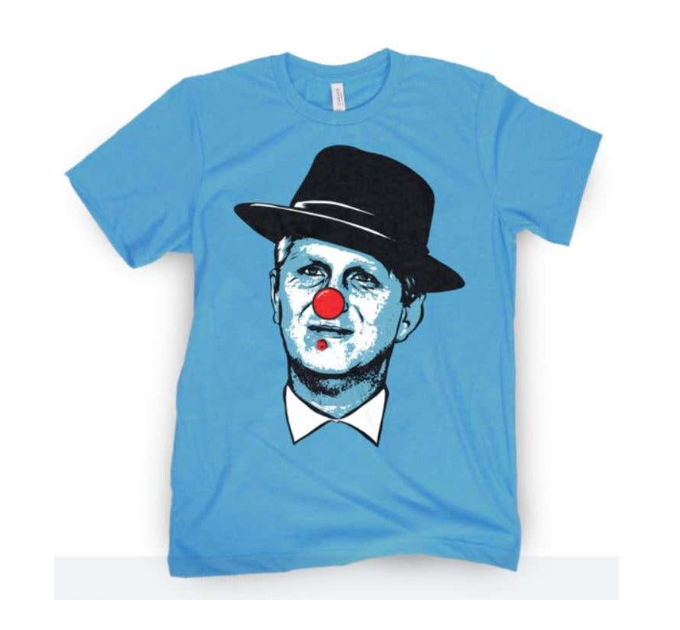