Big Tech is driving an advertising resurgence as the country emerges from a tumultuous pandemic year that saw companies hit the brakes on their usual marketing blitzes. For the second quarter of 2021, Facebook, Alphabet, Amazon, Twitter and Snap smashed Wall Street expectations and delivered record-breaking revenue largely driven by advertising.

Even big players like Apple and Spotify, which previously have not focused much attention on ads, found the revenue growth “impossible to ignore,” as Spotify CEO Daniel Ek described it during the music streamer’s quarterly earnings call July 28. “Admittedly, this is an area where I previously didn’t spend much time,” Ek said, noting that ads used to account for less than 10 percent of Spotify’s total revenue. “It’s now safe to say it’s becoming a second big revenue driver for Spotify.”

Apple, which has put an increased focus on its services revenue like Apple Music and Apple TV+ in recent years, said July 27 that its 33 percent growth in the division’s revenue was driven by its advertising business and by tech support products from AppleCare.

While the COVID-19 delta variant is a threat across the globe, the boom in ad revenue for tech companies isn’t a “fluke,” MoffettNathanson’s Michael Nathanson and Benne Rosner wrote in a July 28 report. The U.S. is entering a “new chapter of accelerated growth,” the analysts forecast.

As spending in linear TV has decreased in response to the decline in viewership, advertisers have turned to platforms like YouTube to better reach users. The video streaming platform, led by CEO Susan Wojcicki, brought in more than $7 billion in ad revenue during the second quarter — an 84 percent increase compared to the previous year’s quarter. Google advertising, meanwhile, rebounded from the pandemic and boasted $50.4 billion in revenue, representing a nearly 69 percent increase year-over-year.

Evercore analyst Mark Mahaney wrote July 28 that YouTube’s growth marked “an ad product inflection point,” driven by “the tipping over of linear TV ad budgets, some of which we believe are being shifted over to YouTube.” 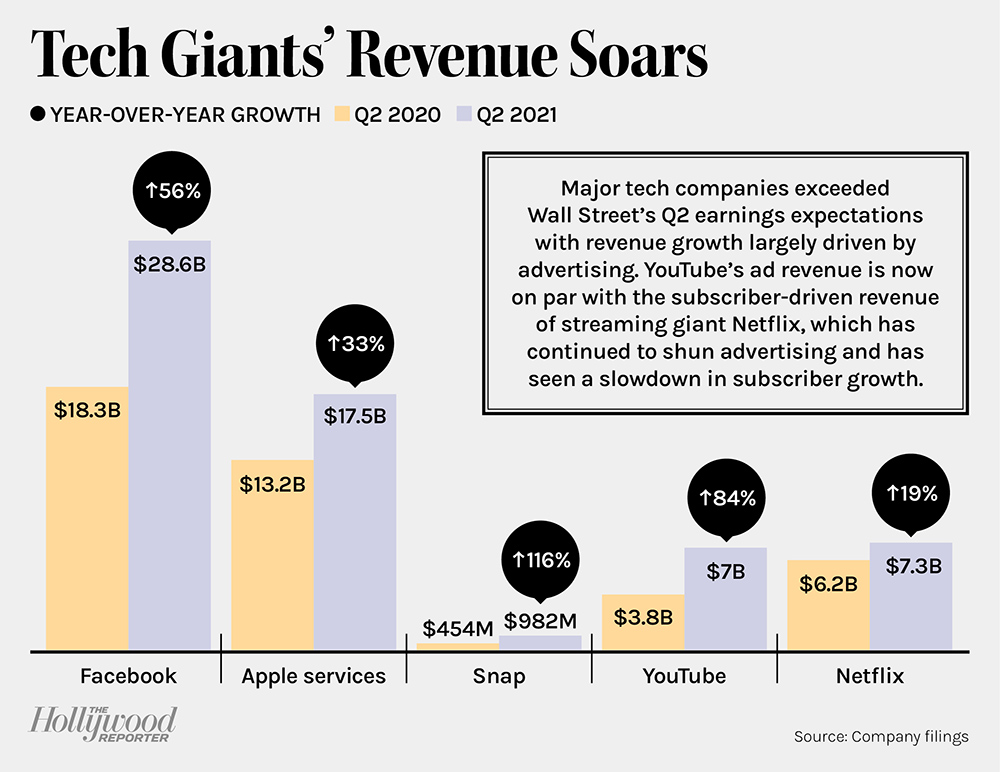 But the upward trajectory for advertising isn’t as helpful for subscription-focused companies like Netflix, which prides itself on its wholly ad-free offering. The streamer had a lackluster year thus far for subscriber growth, adding 1.5 million new subscribers but losing about 400,000 in the U.S. and Canada in Q2 and falling below its subscriber expectations in Q1. Though the company reported $7.3 billion in revenue (up 19 percent), its numbers are now on par with YouTube’s $7 billion in ad revenue — a figure that doesn’t include revenue from subscriptions to services like YouTube TV and YouTube Premium.

“COVID has created some lumpiness in our membership growth (higher growth in 2020, slower growth this year), which is working its way through,” Reed Hastings and Ted Sarandos wrote to shareholders in their Q2 earnings letter, adding that the “unusual choppiness in our growth … distorts year-over-year comparisons.”

While subscriptions remain key, a digital advertising boom could be a bonus for ad-supported streaming platforms. “In general, we anticipate continued broad-based investor enthusiasm for ad-supported digital media stocks,” wrote Guggenheim analyst Michael Morris in a July 26 note. So it makes sense that many media companies are emphasizing their presence in the space.

Many of Netflix’s competitors like HBO Max, Paramount+, Peacock and Hulu are already in the ad-supported streaming business with cheaper subscription tiers that include ads.

Roberts has been trying to position Comcast as a hybrid media-technology company, hoping to receive a tech company valuation for its legacy businesses. On the call, he hyped not only the company’s digital advertising growth, but its broadband growth too, suggesting that his company provides core infrastructure for Big Tech.

“In the longer term, I think we have an opportunity to see the vital trend of direct-to-consumer, digitization, computing power evolving the way we live, how relevant will our company remain and be and help lead that change. And I look at the tech company results, and you just see this trend accelerating.”

Whether Netflix will follow suit and explore advertising remains to be seen, but the pressure may be on as competitors — both in and out of the streaming space — begin to outperform, thanks largely to ad revenue.

“Ad-supported streaming is now foundational just as Netflix, five years ago, when you thought about streaming, was foundational,” says Andre Swanston, the CEO of the TransUnion-owned advertising technology firm Tru Optik. “I think [ad-supported streaming] is almost a business imperative. My biggest surprise is that Netflix still hasn’t pivoted to do the same.”