During the venture capital-funded digital media boom of the 2010s, startup founders often voiced world-conquering ambitions. In 2014, Vice Media co-founder Shane Smith bragged: “We won’t be the next CNN or ESPN or MTV. We’ll be 10 times that size.” A year later, BuzzFeed CEO Jonah Peretti informed staff that they were building “a global, cross-platform network for news and entertainment, … something that has never existed before.” Half a decade later, those grandiose visions are gone as both companies claw to claim a larger share of advertising revenue in a landscape dominated by Facebook and Google.

Their risky gambit? Go public to raise cash and roll up more of their competition through a special purpose acquisition company, or SPAC, a blank-check firm that raises money in an IPO, with the goal of merging with a private company to take them public. Yet the turn to SPACs by BuzzFeed, Vice, Bustle Digital Group and Group Nine, one financier tells The Hollywood Reporter, seems “like a last resort.”

The issue, this source says, is that the private financing that could support major acquisitions appears to be drying up. Venture funds financed the early growth of digital media firms, and Hollywood giants like Comcast and Disney poured in nine-figure investments, too, but those entertainment giants are now spending billions to build Netflix competitors, and the venture funds for media are targeting companies in hot growth areas like gaming, augmented reality and sports betting, leaving these large, previously capitalized digital media companies in limbo.

Over the last few years, these companies have been snapping up smaller competitors. In 2019, Vice — now under the leadership of CEO and former A&E executive Nancy Dubuc — acquired Refinery29, Group Nine Media acquired PopSugar, and Vox Media acquired New York magazine. Then early this year, BuzzFeed closed a deal to buy HuffPost. 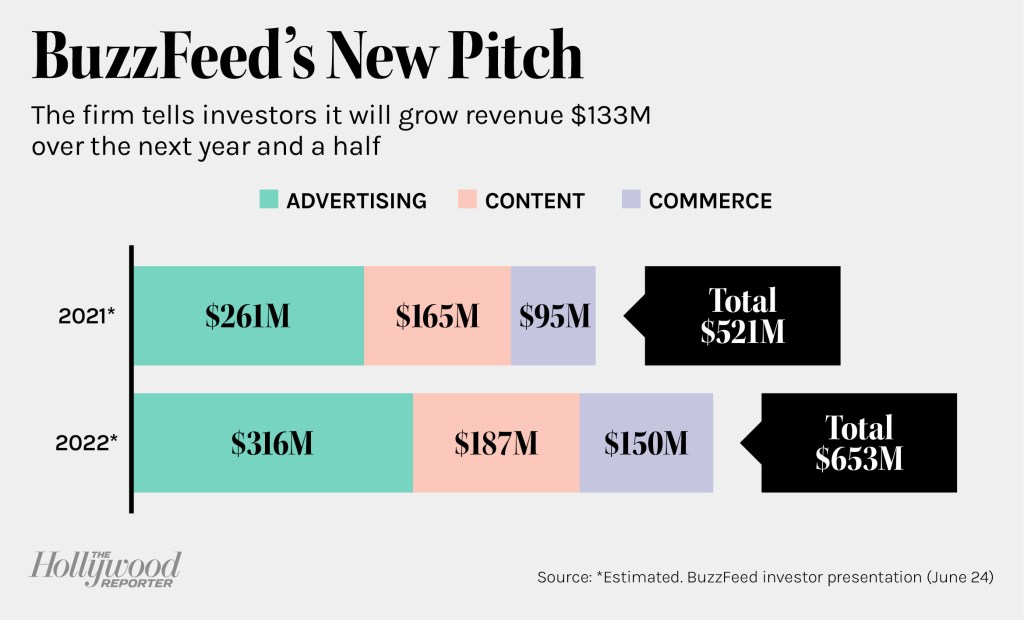 BuzzFeed made the first SPAC move, but fellow digital giants Group Nine Media, BDG and Vice are all engaged in similar maneuvers for an IPO via a blank-check company. “Going public and rolling up this very fragmented audience is a good strategic goal, in my opinion,” says Needham & Co. analyst Laura Martin, adding that merged companies can be more “efficient” because they can pare down expensive staff — such as lawyers — and allow engineers and others to focus their resources better.

Investors, meanwhile, may see an opportunity to “play the growth game” by getting involved in a stock in its “second inning,” says Daniel Ives, the managing director of equity research at Wedbush Securities. Some early investors may also use them as an exit strategy, even if they must sell at a slight loss.

“There’s a lot of companies that go through SPACs, [but] they don’t have the brand or name recognition. BuzzFeed clearly is a household name, especially for many institutional investors that play the space,” Ives says.

On June 24, BuzzFeed unveiled plans to go public via a SPAC called 890 5th Avenue Partners (named after the headquarters of Marvel’s Avengers), valuing the company at $1.5 billion and financing a deal to buy rival Complex Networks, which touts its reach among younger male consumers. “We are hoping to really build an M&A machine,” said 890 5th Avenue exec Adam Rothstein in unveiling the deal.

Group Nine Media (led by CEO Ben Lerer, the son of BuzzFeed’s former chairman Ken Lerer) is taking a different but related approach, sponsoring a SPAC of its own. The goal is to merge Group Nine Media — owner of brands like The Dodo, NowThis and Thrillist — with the target company and take both public, resulting in, yes, more consolidation. A source says that one of the companies that held talks with the Group Nine SPAC is Vice Media, which is pursuing its own SPAC merger (The Information reported that Vice is in “advanced talks” with another SPAC, 7GC & Co Holdings, and a source close to Vice says that the “financing process is still ongoing and we have had positive conversations with a range of investors.”)

Still, the SPAC mergers are giving these companies “a surprising lifeline that didn’t exist a year ago,” notes Ellie Bamford, the global head of media and connections at the consultancy R/ GA. “The pandemic had caused a drop of 30 percent-plus in their advertising revenue. It’s important to remember that only 18 months ago, the digital media industry was looking pretty bleak,” Bamford adds. “There were massive layoffs and pay cuts across the board, and that was after many years of fighting for life against Facebook and Google, who sucked all the air out of room and grabbed all the ad revenues.”

And SPACs can offer speed that a traditional IPO can’t quite match, a critical factor given the rapid transformation of digital media. “This year, we will be able to get public, strengthen our balance sheet, buy Complex Networks, all in an accelerated time period because of the SPAC transaction, which really sets us up to be the consolidator in the media space,” Peretti said June 24 after the SPAC deal was announced, adding that the pandemic nixed IPO plans in 2020.

But BuzzFeed will need to contend with its digital competition in these new consolidation wars, all of whom are seeking capital of their own, with likely overlapping merger targets. “There’s an arms race going after this area of the market. And there is massive spending on digital content,” Ives says. “When you look at BuzzFeed, as well as a lot of its competitors, it’s a first-mover advantage.” 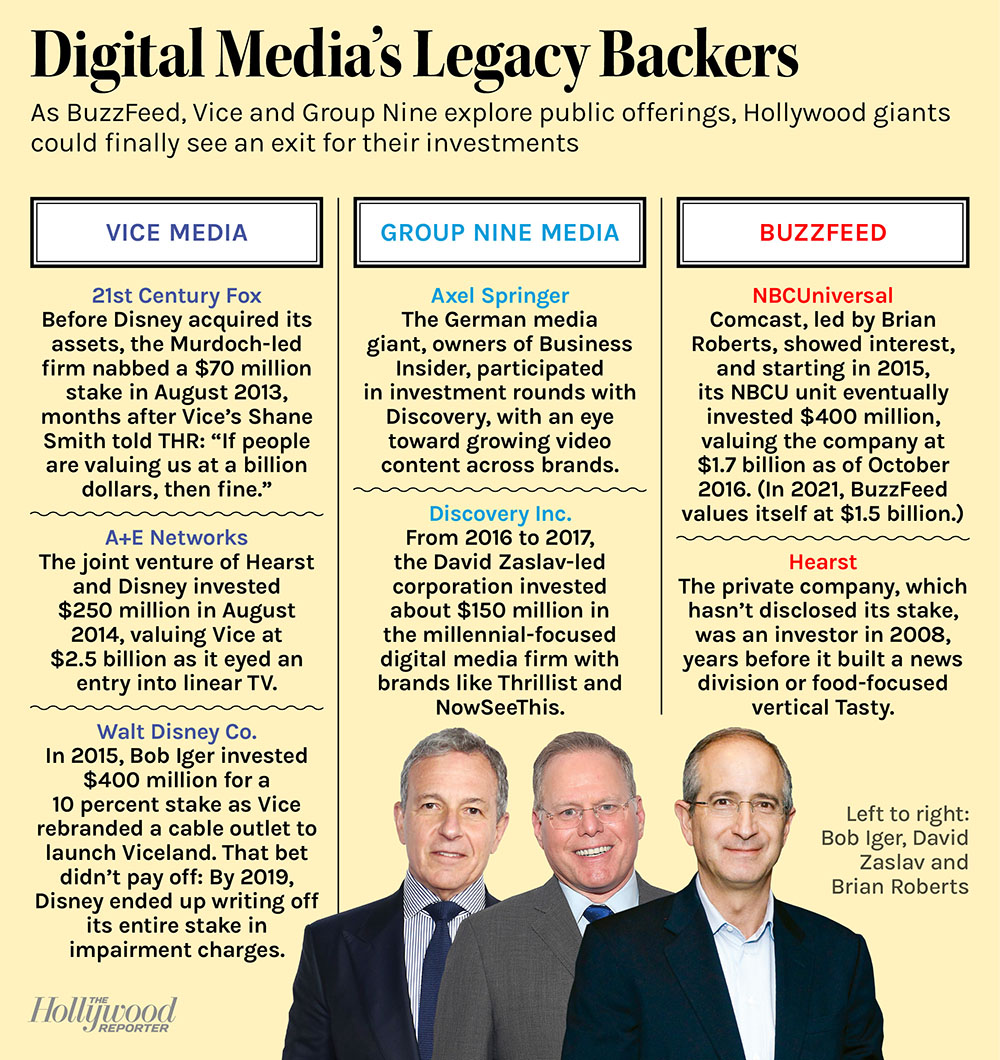 A version of this story appeared in the June 30 issue of The Hollywood Reporter magazine. Click here to subscribe.