The memo arrived out of the blue. On Jan. 22, NBC Sports Group chairman Pete Bevacqua told employees that NBC Sports Network, a cable channel launched in 1995 and available in some 80 million U.S. homes, would shut down by the end of this year. The major sporting events that ran on the channel, including NHL hockey games and NASCAR races, would move to Peacock, NBCUniversal’s new streaming service, and USA Network, the company’s largest cable channel.

But while NBCU may be the first company to make the difficult choice to shut down one of its widely distributed channels in 2021, it won’t be the last. Over the coming months and years, every major entertainment giant will face the dilemma. “I think that you are going to see consolidation taking place in the immediate years ahead,” says media consultant Brad Adgate.

Driving this oncoming consolidation are two factors: managing the decline of the traditional pay TV business, while also investing in direct-to-consumer streaming offerings. “They are all trying to find this balance of, where do I capture the lion’s share of ad dollars and viewership in traditional, combined with trying to gain this emerging piece in streaming,” says Steve Nason, research director for Parks Associates.

Conglomerates like NBCU and WarnerMedia have already restructured their executive ranks to account for this new reality, with the role of network president essentially vanquished from org charts, in favor of centralized content departments tasked with developing programming for both streaming and TV.

“We are not thinking about things by network, but by genre. If something is great, we can and will find a home for it,” NBCU chairman of entertainment content Susan Rovner told attendees of the company’s One21 tech and data conference March 22.

Sports, the core of the traditional pay TV bundle, have now become a key prong of the pitch for NBC’s Peacock, ViacomCBS’ Paramount+ and Amazon Prime Video, among other streaming offerings. “Not only does scripted content redirection make the SVOD and AVOD alternatives better and better, it is also impoverishing the pay TV ecosystem,” writes MoffettNathanson partner Michael Nathanson. “So how much damage would occur if sports also moved more of its A-list games to SVOD and AVOD services?” 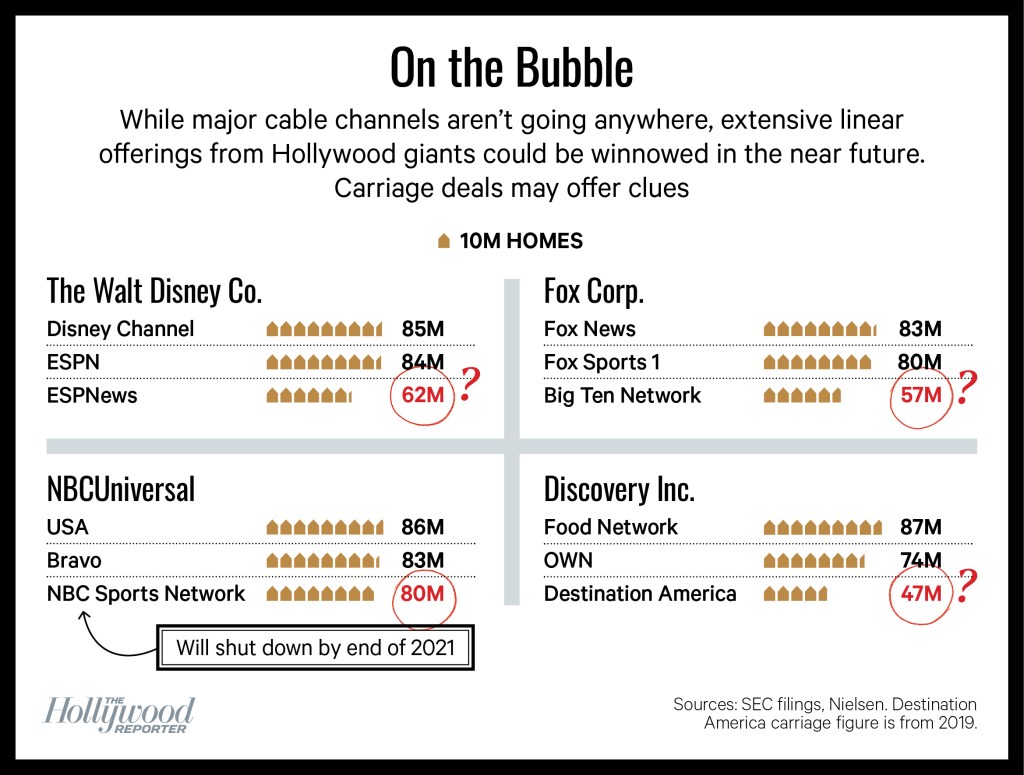 So it is that many smaller cable sports channels are being left behind. Consider CBS Sports’ deal for soccer federation Concacaf’s rights, unveiled April 15: The deal branded Paramount+ as “a year-round soccer destination,” while noting that “select” games would also air on CBS’ linear platforms, like CBS Sports Network.

Or take the WWE, which struck a deal to bring all WWE Network content to Peacock, including flagship events like WrestleMania.

Those deals are “a differentiator that may help each service stand out in a crowded, competitive marketplace,” wrote Kagan analyst Adam Gajo in an April 16 report. “Subscribers are not likely to sign up for sports programming alone, but access to some games could be a factor in encouraging new subscribers to kick the tires and in mitigating churn for existing subscribers.”

And it isn’t just streaming efforts poised to benefit from these changes: Many of the largest cable channels owned by these companies will gain as well, often at the expense of their smaller corporate siblings.

Bevacqua, in his memo to staff, wrote that the shifting of NBC Sports content “will make USA Network an extraordinarily powerful platform in the media marketplace,” combining its significant reach, scale and channel placement.

In other words, NBCU will use the demise of NBCSN to try to bolster its largest cable channel, USA, ensuring that it retains wide distribution and can continue to draw high carriage fees even as the overall ecosystem declines.

“We have long argued that the exclusive sports rights (NCAA, NBA and MLB) have been the reason for Turner’s TBS and TNT general entertainment networks success, … or a least the rationale for why they can charge what they can in monthly affiliate fees,” writes Nathanson in his special report on sports TV. “As more viewing behavior shifts away from the linear networks, especially for rerun/syndicated programming given the unlimited over-the-top and on-demand options, sports will likely be the only way general entertainment networks push for higher affiliate fees going forward.”

Indeed, at an AT&T investor day March 12, WarnerMedia CEO Jason Kilar defended the legacy Turner cable channels as a “damn good business” and “incredibly helpful to the portfolio,” because the cash they generate can be used to invest in HBO Max and other future direct-to-consumer offerings. He added, however, that “it’s incumbent on us to make sure that we’re investing in those businesses smartly,” emphasizing the company’s sports and news offerings.

And while smaller sports channels like NBCSN may be feeling the pinch now, there is no shortage of midsize or small cable channels that could be ripe for a culling. Discovery Inc. operates 20 linear channels in the U.S., but many consumers may be hard-pressed to name more than a handful, and the company is increasingly focusing its new content investment on its Discovery+ streaming service.

WarnerMedia owns such major channels as TBS and CNN, but what about smaller channels like Boomerang or truTV? In February, as it happens, WarnerMedia inked a new deal with the stars of truTV’s only major hit, Impractical Jokers. The deal will see them create a slate of scripted and unscripted fare … including for TBS, TNT and HBO Max.

And this week WarnerMedia announced a new deal with the NHL, which will bring hockey games (including Stanley Cup playoff games) to TBS, TNT, and eventually HBO Max.

“Every big media company has cable networks that are going to be more vulnerable than the top-tier USAs and TNTs,” Adgate says. “I think you will see some of these smaller networks go by the wayside.

The question, then, is when the tough choices will be made, and where the content on these channels will be relocated: To the streaming services their parent companies are seeking to grow, or the big cable channels they are trying to keep profitable? “I don’t envy them in the position they’re in,” Nason says. “It is tough, it is difficult, and it is only going to be accelerated, these trends.”

Live Sports' TV Ratings Gamble: Will There Be a Comeback?