In a March 16 email to its members, the organization’s board explained that the missive, allegedly signed “Angry Actor,” was “very disturbing,” and while it did not elaborate on its content, the CSA vowed it “will not tolerate threats against our members.” On March 20, an update sent from CSA administrator Laura Adler explained that she’d joined member Michael Nicolo (Fresh Off the Boat, New Girl) on a visit to the LAPD that morning. (Nicolo had previously submitted his letter to law enforcement.)

“Unfortunately we were told by a Detective that after reviewing the letters they deem this to be a civil matter, more specifically a ‘business dispute,’” Adler wrote to members. “They do not see anything criminal at the moment.”

In recent months the CSA hired publicity firm Fifteen Minutes, which is well known for its crisis communications services. The organization declined to share the letter with The Hollywood Reporter, only adding in a separate statement, “the CSA is continuing to monitor the situation. We take this matter very seriously.” Adler explained in her email that copies of the so-called Angry Actor’s missive are now in the possession of the LAPD.

The situation comes as Los Angeles City Attorney Mike Feuer pursues charges against five workshop firms, their owners and operators, as well as a group of casting directors, associates and assistants who held classes there. Initial court appearances for Actors’ Alley and the since-shuttered Your Studio Productions and The Actor’s Key have already taken place. Arraignments against The Actors Link (since rebranded Ace Studios) and The Casting Network will occur within days.

See the full note below. 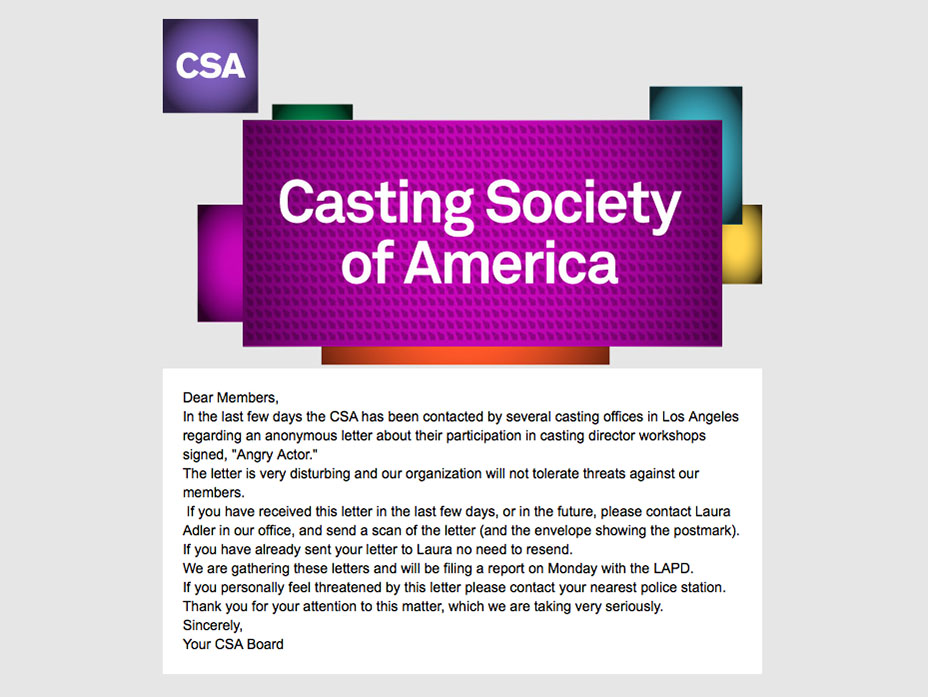 L.A. Mayor Backs Casting Workshop Crackdown: “Everybody Else Better Be Looking Over Their Shoulders”