After averaging 35 percent yearly growth for a decade (and climbing an astonishing 48 percent to $6.8 billion in 2015), box-office revenue in China dipped to $6.6 billion in 2016, according to a March 22 report released by the MPAA.

That looks even worse when one considers that in 2016, Beijing allowed more Hollywood films to be shown than in previous years — 40 compared with the usual 34. It appears a tiny bit better given that the strong dollar made the studios’ take disproportionately weak; in local currency, box office rose a modest 4 percent — a small gain but nothing compared with previous years.

“China had a significant impact on the bottom line [globally],” says analyst Eric Handler of MKM Partners. After banking on continued growth in the country, Handler adds, Hollywood might have to adjust.

Experts point to a constellation of factors that hurt ticket sales and helped lead to a lower global take for studio pictures:

→ A wave of low-quality local films, often produced in a hurry by speculators and industry newcomers, depressed overall enthusiasm for moviegoing.

→ Ticket subsidies offered by online sellers diminished. More than 70 percent of movie tickets are sold online in China, compared with about 20 percent in the U.S. In the past, startup ticketing services offered steep discounts, but those stabilized last year. 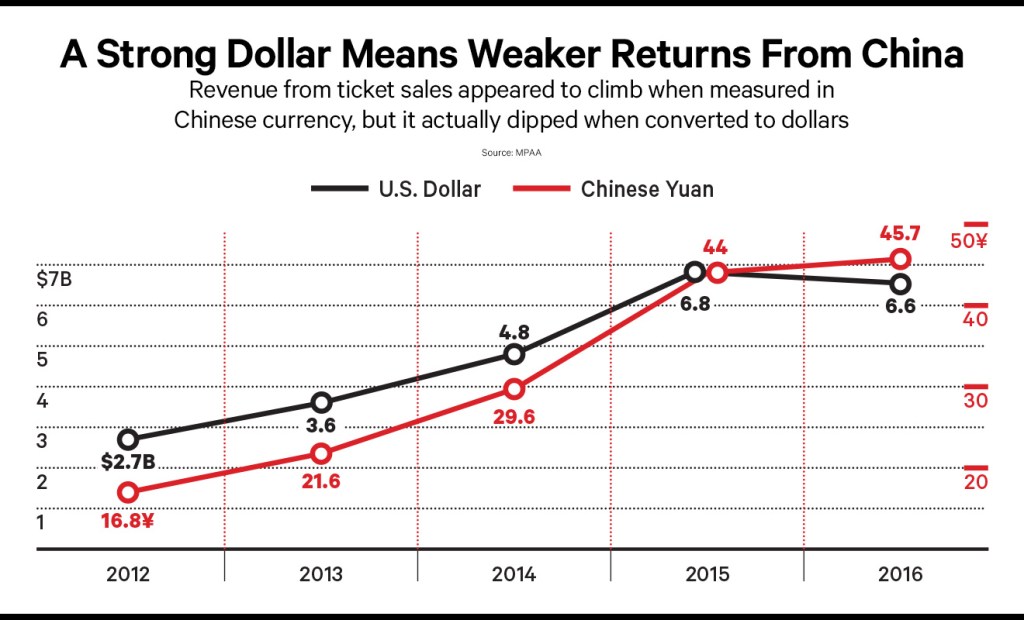 → Chinese regulators cracked down on ticket fraud. After a few films were publicly outed when their makers arranged for the bulk-buying of opening-weekend tickets to create the impression of a must-see hit, regulators put a stop to the practice.

→ While Star Wars: The Force Awakens set records elsewhere, it lagged in China and earned only $124 million, hardly a standout compared with box-office topper The Mermaid ($526.8 million).

“China doesn’t have a long affinity with Star Wars, [and] sci-fi just doesn’t play as well there,” says Handler. Overall, he adds, “Hollywood content didn’t resonate as much.”

That slate will be crucial to the overall international box-office picture, where revenue reached $27.2 billion in 2016 for a global total of $38.6 billion. But this time it was the domestic market, not the foreign one, that saved the day: Thanks to a 2 percent uptick in North America, global ticket sales set a benchmark, slightly surpassing 2015’s previous record of $38.4 billion when the foreign share was $27.3 billion.

But that might be cold comfort to the studios. With per-capita movie attendance at its lowest point in history, the foreign market has to bounce back big time for the film business to keep growing. 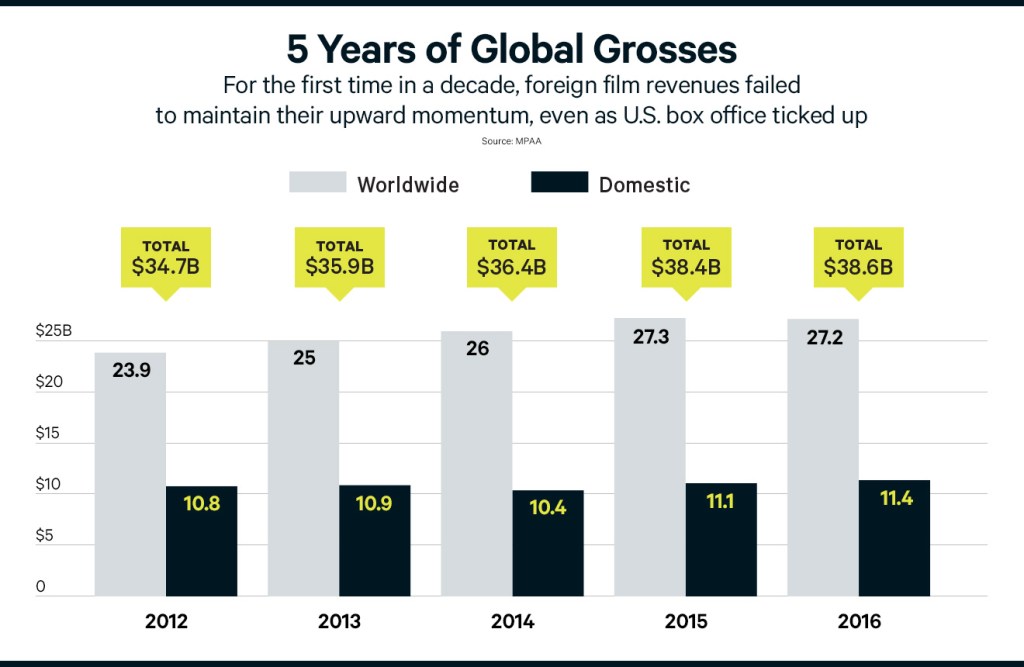