It’s the quiet Mike Morrison finds most striking. A Disneyland Resort employee for 16 years, the manager of engineering services for Anaheim’s California Adventure Park is used to the bustle that accompanies one of the most popular theme parks in the world. But for nearly one year now, the Disneyland Resort has been shuttered amid the pandemic.

“The days feel longer,” says Morrison, who leads the team responsible for the maintenance of the attractions in California Adventure even when there are no visitors. “You have this eerie sense of silence as you’re walking through. And occasionally that silence is broken by the chirping of birds, something from the outside world that you would never typically notice.”

Disneyland closed its gates March 14, 2020. Before that time, the park only had been shut for 24-hour periods after major national events, such as the assassination of John F. Kennedy and the Sept. 11 terrorist attacks. Locked in a standoff with Gov. Gavin Newsom on when the park can reopen amid a pandemic, Disney has taken a financial hit — $2.6 billion in the past quarter alone — and furloughed thousands of employees who don’t know when they’ll return to work. And the Democrat is facing political pressure to reopen more businesses as organizers aim to collect 1.49 million signatures before a March 17 deadline to kick-start a recall election.

Anaheim Mayor Harry Sidhu notes that the theme park’s closure has had a “profound impact” on the region. “Unemployment in our city is now 9 percent, or 15,000 people, and has been as high as 12 percent — numbers not seen since the Great Recession,” Sidhu says. “Anaheim faces a $115 million budget deficit from lost revenue from hotel stays and visitor spending.”

An effort is underway to break the stalemate with the state. On Feb. 4, California Assembly Members Sharon Quirk-Silva (D-Buena Park) and Suzette Valladares (R-Santa Clarita) proposed legislation aimed at speeding along a reopening. The bill would allow Disneyland to reopen if Orange County moves into the “moderate” pandemic risk tier (a seven-day average rate of 1 to 3.9 cases per 100,000 tests) rather than when it hits the “minimal” tier (less than 1 case per 100,000 tests). The county remains in the “widespread” tier as of March 1 with 11.7 COVID-19 cases per 100,000 tests. Disney hasn’t commented on the bill, but Sidhu’s office has endorsed it.

In the meantime, Disneyland employees are hurting. “We know members are experiencing economic stress because of the pandemic,” says Chris Duarte, union president for Workers United Local 50, which represents food and beverage employees in the Anaheim park. “Struggling to pay rent, mortgages and other bills is something we hear in online chatter or directly when people contact us looking for assistance options. We’ve heard of some individuals contemplating leaving California because of the stress but are not aware of anyone pulling that trigger.”

For the better part of last year, SoCal theme parks have been at odds with the state as the businesses pushed to reopen. In October, Disneyland Resort president Ken Potrock criticized state guidelines as “arbitrary” and “unworkable.” Disney’s Walt Disney World serves as a counterpoint case study. The Florida location, which reopened July 11, has enforced temperature screenings, social distancing, new cleaning procedures and a face covering mandate. (Disney didn’t comment for this story, nor did Newsom’s office.)

The California Attractions and Parks Association, the group repping parks including Universal Studios Hollywood, Six Flags Magic Mountain and Legoland, has been the main voice advocating a reopening. “COVID transmission rates are improving, and the vaccination distribution is underway, yet California’s major theme parks have no timeline and no realistic pathway toward reopening if left in the yellow/minimal tier of state guidance,” says Erin Guerrero, executive director of CAPA. 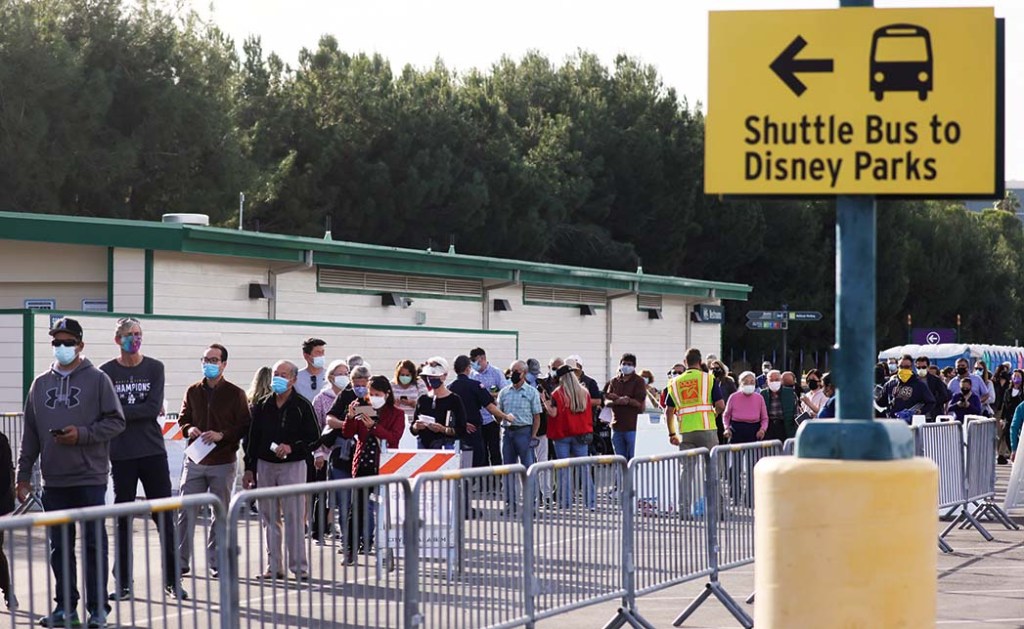 In early January, Disneyland’s Toy Story Parking Area was converted to a COVID-19 vaccination site, with six clinics offering the two-shot Pfizer vaccine to eligible individuals. Disney has not said how long it will host the site, and the state hasn’t unveiled a timeline for when nonessential workers and younger adults will be eligible for the vaccine.

There’s evidence the public is feeling safer about visiting parks again. During the week of Feb. 25, about 27 percent of Americans said they felt comfortable returning to an amusement park amid the pandemic, per data intelligence firm Morning Consult, which conducts weekly surveys of 2,200 U.S. adults. That percentage marks a high in public confidence since 20 percent stated the same during the week of June 5.

Mayor Sidhu has been among the leading political voices in calling on Newsom to change course with reopenings. “We need a clear path forward for the phased reopening of our theme parks, convention center and sports venues,” he says. “We can continue our progress against coronavirus as we work on safe and gradual economic recovery of our city.”

UBS Research, a division of the investment bank, forecast in a Jan. 22 report that Disney’s parks division isn’t expected to “approach historical performance and attendance metrics” until the end of fiscal year 2022. And for the Anaheim park, UBS noted: “At this point we do not expect it to reopen until mid-2021 and will likely face 25 percent capacity limitations for some time.”

Moody’s senior vice president Neil Begley says the financial impact of a closed Disneyland has been worse than expected. “We predicted the potential impact as early as January [2020], but we did not contemplate a multiyear impact — and in the beginning, neither did anyone else,” the analyst says.

Top Disney execs have noted the longer road to recovery for the location. “There’s no doubt that when we reopen a park after it’s been closed for a prolonged period of time, there’s going to be some reopening costs,” Disney CEO Bob Chapek said at a Morgan Stanley event March 1. “We’ve got to go rehire labor, which we’re more than glad to do. We want to put people back to work.”

Tina Taipale, a 42-year Disneyland employee who has kept her role as security duty manager during the pandemic, adds that workers are ready to return when the park is reopened. “We have great safety protocols and the PPE [personal protective equipment] and supplies we need,” notes Taipale. “I feel safer here at work than I do going pretty much anywhere else.”

A version of this story first appeared in the March 3 issue of The Hollywood Reporter magazine. Click here to subscribe.