At Trump National Doral Miami, a golf resort, revenues are down about 43 percent. Income at the former president’s eponymous D.C. hotel has plummeted nearly 63 percent, while management fees at the branded Chicago hotel have dropped by close to $1.2 million.

Former President Donald Trump’s final financial disclosure report, made public soon after he and his family left the White House for the last time, shows just how much many of his properties have floundered since his 2019 filing.

The Trump Organization saw a 38 percent decline in revenue in 2020 and the first weeks of 2021, compared to the previous year. Much of the loss can be attributed to the COVID-19 pandemic, which has devastated the hospitality industry.

But after the Jan. 6 riots at the U.S. Capitol that left five dead, some experts say the Trump name may make it impossible for the company to ever regain its standing. “Trump as a luxury hospitality brand in the United States is absolutely 100 percent over,” says Chris Allieri, founder and principal of Mulberry & Astor, a New York City-based public relations firm. Although Allieri is quick to point out the pandemic is the main culprit for the Trump Organization’s revenue losses, it’s clear Trump himself is also a factor.

Businesses who stood by the former president through previous scandals finally had enough after seeing the violence unfold in Washington, Allieri notes. In the days after the riot, three banks (including one of Trump’s main lenders, Deutsche Bank); the real estate company Cushman & Wakefield; the Professional Golfers’ Association of America, and even the City of New York announced they were terminating tournaments, dissolving contracts and would not do future business with Trump.

At the same time, the former president also lost access to Twitter, Facebook, YouTube and other platforms. Eric Trump, who runs the Trump Organization with his brother Donald Jr., told the AP the moves were part of the “cancel culture” and the company has plenty of assets to leverage. Representatives did not respond to requests for comment for this article.

A few of the former president’s supporters have started to step away, with the white supremacist group the Proud Boys now calling him “a total failure.”

]ho remain loyal aren’t necessarily associated with the opulence the brand strives for.

“The whole notion that Trump stands for luxury and luxury brands doesn’t really make sense anymore when his base is so rural and decidedly not luxurious by choice,” says Jeffrey B. Hirsch of Los Angeles-based JBH Personal Branding. 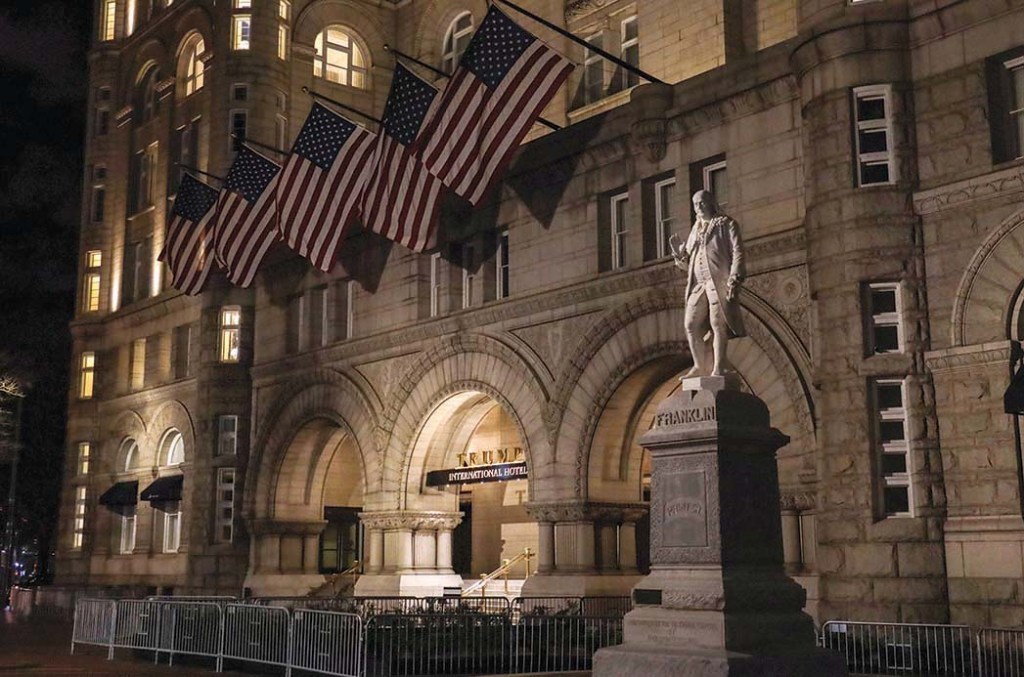 Some of Trump’s properties were already underperforming, so much so that the organization has tried to offload them. It had been shopping the lease on its 263-room D.C. hotel for about a year, with an asking price of $500 million, but reportedly decided to postpone the sale after fielding bids of less than half the asking price. Any deal would stipulate the new owners keep the Trump name. The hotel and its dining room had been popular with lobbyists, Trump supporters and White House aides, so it’s likely to be even quieter with President Joseph R. Biden in office. And although the Trump Organization operates the hotel, it is owned by the federal government. The Biden administration could dissolve the lease if Trump is being investigated for criminal activity by a government authority, which is not unlikely.

Trump still faces a second impeachment trial, set to start Feb. 9. Plus, the New York Attorney General and the Manhattan District Attorney have not-so-quietly been probing Trump’s business dealings, and those investigations are likely to intensify now that he is out of office.

Efforts to remove the Trump name from buildings — and keep it from ever being emblazoned on another facade — have popped up around the country, starting in New York where discussions are underway to take down his branding from Trump Palace on the Upper East Side.

In Chicago, Alderman Gilbert Villegas is planning a new ordinance that would deny a sign permit to an applicant convicted of “treason, sedition or subversive activities.” That would mean the 2,891-square-foot sign on the Trump International Hotel & Tower in Chicago would have to go.

In addition, California Rep. Linda Sánchez has said she is working on a bill to prevent Trump’s name from appearing on new airports or other buildings, while Texas Congressman Joaquin Castro tweeted that he is “preparing legislation that would prohibit any federal building or property from being named after President Donald J. Trump.”

Despite all this, there are avenues still available to the former president, according to Allieri. If he stays in hospitality, he could look internationally for both funding and real estate propositions. Or maybe he’d consider a turn toward executive education.

“I could totally see people shelling out 5,000 bucks to listen to Trump,” he says.

Regardless, it’s too soon to count Trump out completely, warns Allieri. “Is this a toxic brand? Yes. Is this brand in crisis? Absolutely. But is he going away? Absolutely not,” he explains. “This isn’t just any twice-impeached ex-president skulking off to Palm Beach. This is a person who doesn’t surrender.”