When Endeavor filed to go public on March 31, nearly two years after its first (unsuccessful) effort, it made a subtle but significant change in its pitch to investors.

In Endeavor’s first filing on May 23, 2019, the opening line in its prospectus read “Endeavor is a global entertainment, sports and content company, home to many of the world’s most dynamic and engaging storytellers, brands, live events and experiences.” The emphasis was on entertainment, and storytellers. Fitting for a company founded and built on the success of the creators and performers of film and television.

In its second attempt on March 31, 2021, the opening line in its prospectus read “Endeavor is a premium intellectual property, content, events, and experiences company.” Whereas in 2019, the company’s representation business was front and center, with Endeavor saying its job was to “create value for our clients – talent, brands and owners of intellectual property (‘IP’),” now in 2021 it pitches itself as the owner of the IP, a company that was “founded as a client representation business” but has “expanded” in the last couple of years to be something quite different: What it calls an “integrated global platform.”

The profound impact of the pandemic on Endeavor’s business has led to a reorganizing of its focus, with sports and events now at the forefront, and with fighting league UFC and Professional Bull Riders highlighted as its key IP holdings rather than talent agency WME or modeling firm IMG.

“We believe that our Company is distinguished by our ownership of intellectual property,” the company writes in its new prospectus. While its representation business took a big hit, the company’s owned sports segment — led by its stake in UFC and PBR — saw its revenue rise 1.8 percent, with the MMA company able to keep its PPV fights mostly uninterrupted.

While the pandemic battered Hollywood in 2020, causing Endeavor’s representation business to see a 43.6 percent decline year-over-year as Hollywood productions and music venues shut down, the company’s owned sports segment — led by its stake in UFC and PBR — saw its revenues rise by 1.8 percent, with the MMA company able to continue its pay-per-view fights mostly uninterrupted (albeit without live crowds).

“The majority of UFC’s revenues are earned from contractual long-term media and pay per view deals that allowed UFC to continue generating strong results, despite the pandemic,” wrote Moody’s analysts Scott Van den Bosch and Stephen Sohn, noting that Endeavor “used the proceeds [from UFC] to provide liquidity to WME IMG in 2020.”

Now, as part of its IPO push, Endeavor says it will buy out the 49 percent stake of UFC that it doesn’t already own, giving it total control of the company and its cashflows, giving the company the cash boost it needs to emerge from the pandemic stronger.

Another likely benefit of the UFC buyout is a reduction of Endeavor’s heavy debt load, which now totals nearly $6 billion. Moody’s in its note “projects Endeavor will pursue a more conservative financial policy as a public company with the goal to reduce net leverage.”

“The planned 100% buyout of UFC’s significant cash flow base, which was resilient during the COVID-19 pandemic, would probably benefit WME IMG’s and Endeavor’s credit profiles,” wrote S&P Global analysts Jing Li and Emile J. Courtney in a note after the IPO filing was released. “We believe the UFC buyout would probably remove governance-related constraints on Endeavor, enabling it to extract cash from UFC to support WME IMG, which was significantly impaired by the pandemic, or for any other investment goal.”

What are those investments? The prospectus calls them “new digitally focused in-home entertainment business models,” but close watchers of Wall Street will recognize two of the hottest trends: Sports betting, and direct-to-consumer streaming.

The pitch has already found interested buyers. In addition to its IPO, Endeavor revealed that it has secured more than $1.7 billion in a private placement with Tencent, Elliott Management, Silver Lake and Third Point, among other parties. The private placement will help fund the UFC buyout, and is a sign of buy-in from major Wall Street players.

With Tesla firebrand Elon Musk on its board, and with its future pitch built around businesses that have sent share prices of companies like DraftKings and Disney sky-high, Endeavor is hoping to ride that wave on the public markets as well, carrying its legacy client representation business along with it. 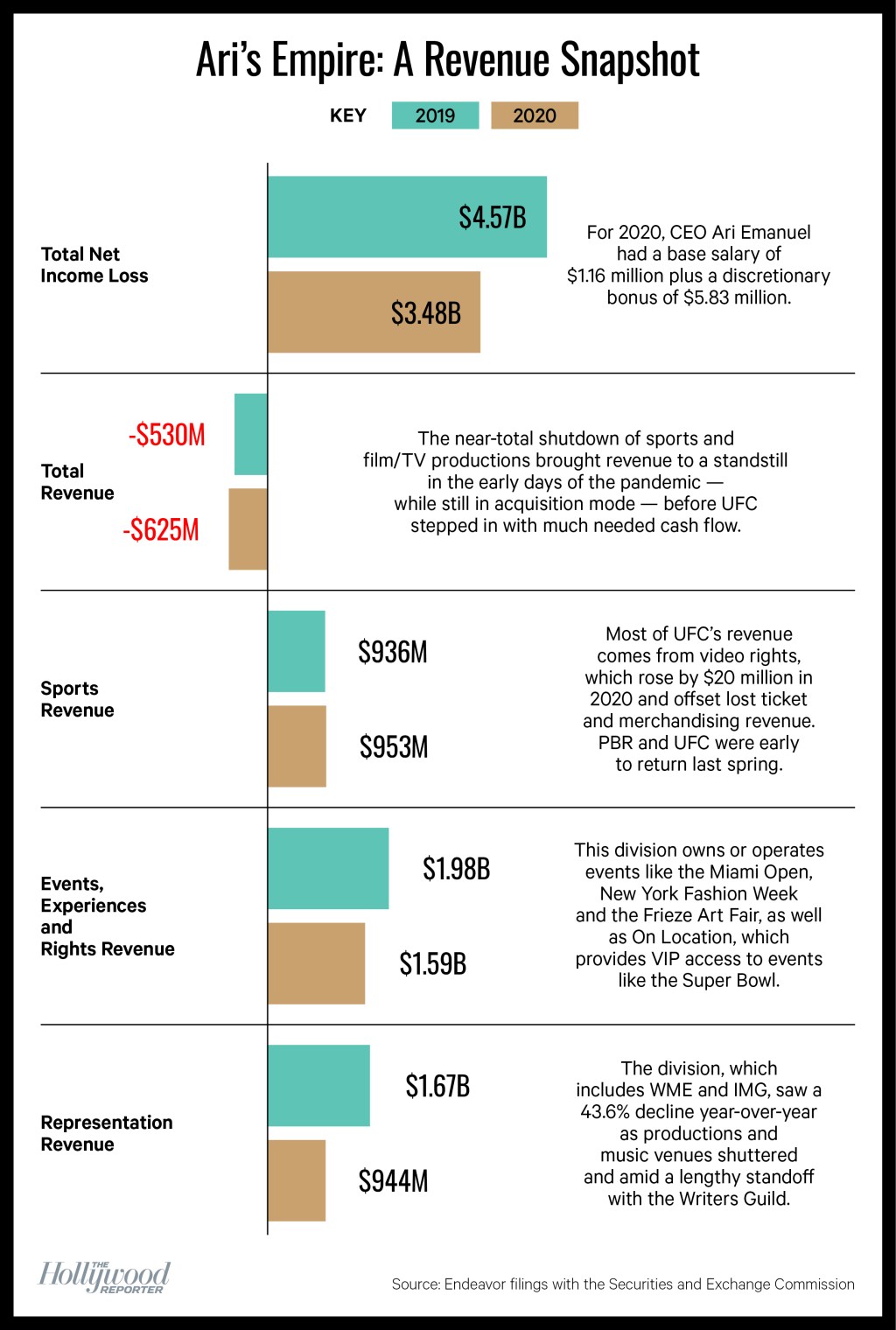 A version of this story appeared in the April 7 issue of The Hollywood Reporter magazine. Click here to subscribe.