On Aug. 6, Disney unveiled a new weapon to take on its streaming competitors: a plan to bundle its forthcoming Disney+ streamer with both Hulu and ESPN+ for the price of $12.99, the same as a standard subscription to Netflix.

The decision to include ESPN’s streaming service in the bundle could pay dividends, says Morning Consult co-founder and chief research officer Kyle Dropp. “What matters most here is that 41 percent of frequent sports watchers said they would be likely to subscribe to the bundle, which includes ESPN+. That’s 10 points higher than those who said they would subscribe to Disney+ alone,” he notes. “Avid sports fans are crucial audiences that streaming services have struggled to reach.”

Still, overall, 62 percent responded to the survey to say they have little or no interest in signing up for Disney’s upcoming $12.99 per-month streaming bundle, and 24 percent may never even have heard of the primary product in that offering: Disney+, a data point sure to change as Disney ramps up advertising ahead of the streamer’s Nov. 12 launch. (The poll, conducted among 2,200 respondents Aug. 8-9, occurred before Disney unveiled a flurry of new high-profile projects at its own convention, D23, on the Aug. 23-25 weekend.)

Michael Pachter, an analyst with Wedbush, calls the poll results “understandable,” and he presumes many consumers aren’t even quite sure that Disney owns Star Wars, Marvel or even Pixar, the content that will make up a huge portion of Disney+. Still, the analyst expects that 10-15 million Americans will subscribe to Disney+ in its first year, which is 8-12 percent of households, or 3-5 percent of the population. “Both of those numbers are consistent with 62 percent having little or no interest,” Patcher says.

The big coming-out extravaganza for Disney+ was at its annual D23 Expo in Anaheim on Aug. 23, where executives showed some of the exclusive programming, including video of the newest iteration of High School Musical, a reimagined Lady and the Tramp, a Star Wars-based The Mandalorian series and more.

While the Morning Consult poll indicated that 24 percent have heard “nothing at all” about Disney+ and 22 percent say they heard “not much” about it, Disney said months before the D23 presentation that it is confident its marketing will eventually reach 95 percent of its target audience for Disney+, and CEO Bob Iger was asked by Bank of America analyst Jessica Reif Ehrlich on an Aug. 6 conference call about that assertion. “I haven’t seen marketing yet,” the analyst told Iger.

“Disney+ marketing is going to start to hit in later this month,” Iger said. “We’re actually going to allow members of D23 to be the first to subscribe. I’m actually going through a comprehensive marketing plan with the team next week. ‘Comprehensive’ probably is an understatement. It is going to be treated as the most important product that the company has launched in, I don’t know, certainly during my tenure.”

Iger wasn’t specific as to the marketing plan but said ads will be pushed to visitors at Disney hotels, holders of its co-branded credit cards, annual pass holders of its theme parks and more. “The opportunities are tremendous…and I feel good about some of the creative that I’ve already seen,” he said.

Meanwhile, NBCUniversal and Apple are also planning streaming services, and 49 percent of American adults haven’t heard anything about the former, while 37 percent haven’t heard of the latter, according to the Morning Consult poll.

The poll also indicates a willingness among consumers to pay for multiple services, as 67 percent currently pay for one or two streamers and 28 percent subscribe to three or four, though only 4 percent are paying for five or more. Pachter, though, adds the caveat that what respondents say to pollsters could be misleading. “I conducted a 5,000-person poll asking people if they would ‘consider’ quitting Netflix if the price went from $7.99 to $8.99, and 40 percent said yes, and nobody quit. They ‘considered’ it and decided to stay,” he notes. 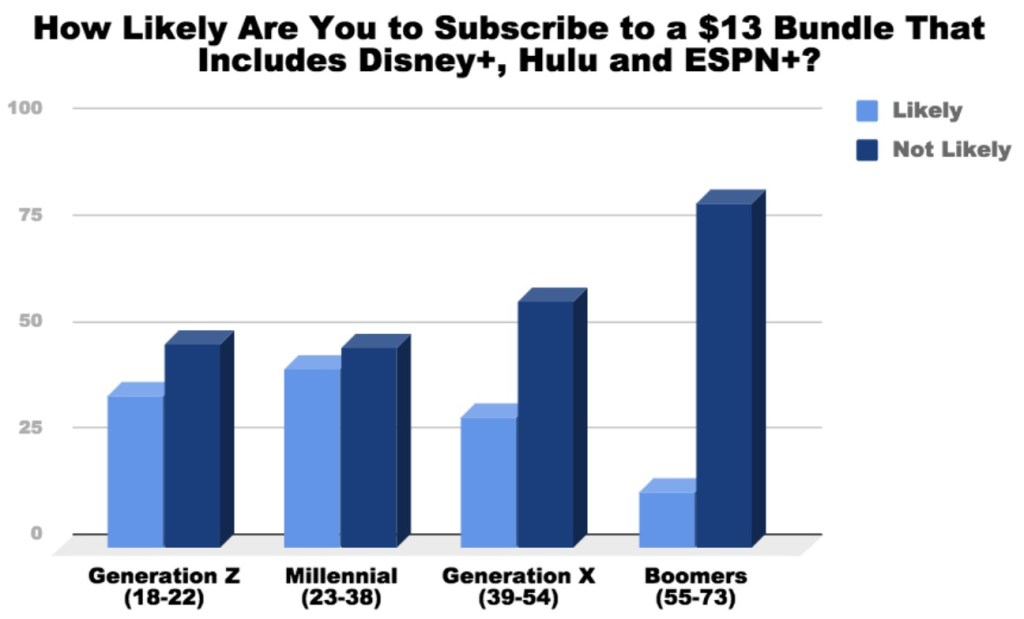 Why Disney's $13 Streaming Bundle May Be a Double-Edged Sword