On March 14, incoming ESPN president Jimmy Pitaro — then still Los Angeles-based — made a trip to the network’s Bristol, Connecticut, headquarters for a town hall with employees.

Pitaro, 48, is a digital-native executive with strong ties to Disney CEO Bob Iger. He assumed stewardship over a company rocked months earlier by the head- spinning departure of John Skipper, the victim of a blackmail scheme by a cocaine dealer. At the same time, the 8,000-employee sports behemoth was being buffeted by political controversies (including widespread NFL anthem protests) that exacerbated its relationship with arguably the most powerful league in sports.

So Pitaro’s mandate was to calm the waters. When he was asked by staff about charges of a liberal bias at ESPN, he pushed back. The company, he told employees, is not “a political organization. Of course there will be an intersection between sports and politics. We will cover that fairly. But we are focused on serving the sports fan.”

As to the other elephant in the room, Pitaro admitted that the NFL relationship is “complicated.” But he already has begun to repair the rift. (In 2011, ESPN agreed to a $15.2 billion deal to carry Monday Night Football through 2021, which means the network could begin talks in the near future.) After all, he said, ESPN always has walked a fine line in covering a league with which it partners.

Now Pitaro is asserting his leadership of ESPN at a time of internal division at the network, which is caught in the crosshairs of the Trump culture wars and the worsening economics of cable TV. And the network’s detractors on the right have executed a misdirect — framing the network’s market challenges as a culture problem. Among the dozen or so ESPN staffers who spoke to THR for this story, virtually all express concern about the network’s direction. “It’s a demoralizing place to be,” says one high-profile on-air talent of the mood.

As the worldwide sports leader with 87 million subscribers, ESPN presents a big and juicy target. But there also have been unforced errors. The network apologized last summer for a fantasy football marathon that for some conjured a slave auction — mere days after white supremacist violence in Charlottesville. Internal discord over the 6 p.m. SportsCenter experiment co-hosted by Jemele Hill and Michael Smith — and yanked after less than a year despite four-year deals worth $10 million each — still lingers.

When Hill, who became a lightning rod with critics dubbing the show “WokeCenter,” left in February, Norby Williamson, ESPN’s executive vp and executive editor of studio production, quipped in front of a room full of people: “One down, one to go.” Four ESPN employees tell THR that Dave Roberts, ESPN’s vp content, was heard characterizing the show as “too black.” (Through a spokesperson, Roberts, who is African-American, vehemently denies saying this.)

“It’s not that they were too woke, or too black, the problem was they were too new,” says a veteran senior executive. “They were too unfamiliar to the 6 p.m. audience. From the second they started they were up against internal crap, the traditionalists shitting on them, and they faced harsh criticism externally. It was panic from moment one. And the network didn’t do a good job of defending and supporting them.”

Sage Steele and Kevin Negandhi replaced Hill and Smith; Steele is African-American and Negandhi, who has been at ESPN for 12 years, is Indian-American. The show has reverted to a more traditional SportsCenter mold, notching a slight uptick in viewers. 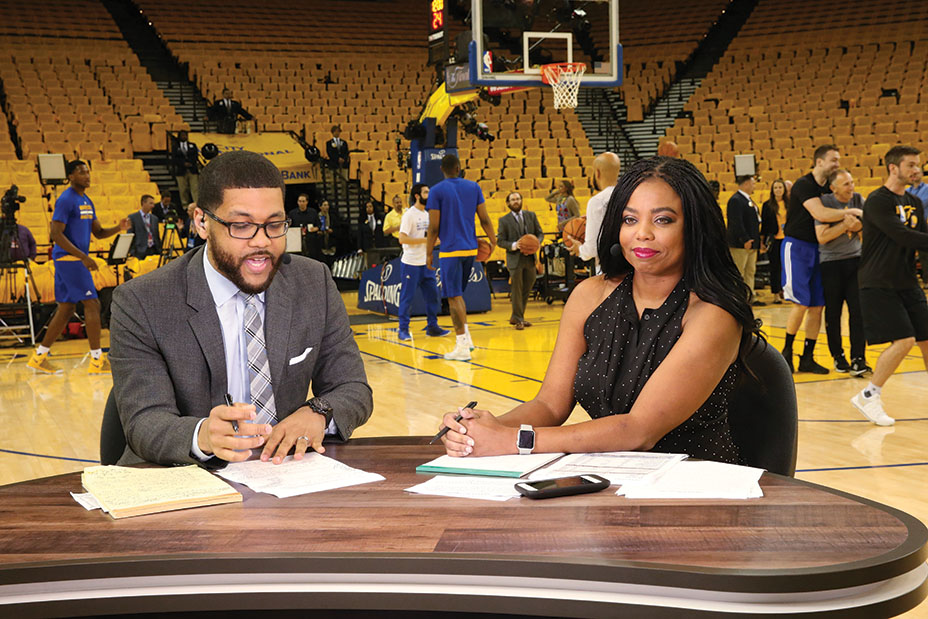 And the irony of being cast as a target of the right is that much of the leadership in Bristol is actually conservative. “The network itself takes a terrific knock for being some kind of pinko lefty operation,” says the executive. “Skipper was a progressive guy, he was about diversity and inclusion and made some decisions that frankly put a target on ESPN’s back” – like giving Caitlyn Jenner the Arthur Ashe Courage Award at the 2015 ESPYs. “At this point, Bristol, Connecticut, is not a bastion of liberalism. And it’s laughable that that’s the perception.”

Among its biggest stars is First Take‘s Stephen A. Smith, who has professed support for Donald Trump, though not on every issue. Meanwhile, Will Cain, a conservative who has had stints at The Blaze and CNN and has been an ESPN contributor since 2015, got his own ESPN Radio program in January and is now part of the ESPN TV firmament. And Roberts, say three sources, has suggested replacing First Take moderator Molly Qerim with Cain.

But the focus on right-leaning agitators is frustrating, say staffers. “Anybody who is getting an ESPN paycheck right now — outside of the communications department — who is spending their time trying to debunk the narrative that ESPN is losing subscribers because of a political agenda should be punished,” says author and THR contributor James Andrew Miller, who co-wrote an ESPN oral history and hosts the Origins podcast. “It’s been litigated to death. There is absolutely no definitive correlation that has ever been presented. And a ton of other evidence suggesting that that’s not the case. Enough is enough.”

For many ESPN employees, friction between its journalism and its rights partners is nothing new. And while they would prefer that the focus remain on sports, it’s no coincidence that some of the network’s perception problems have stemmed from its reporting and commentary on the NFL, which is inherently autocratic, while many of its owners are conservative. (Investigative program Outside the Lines published leading reporting on the domestic violence and concussion issues.)

“You have people saying how much is it worth to do a minute-thirty package on a show that is seen by less than a million people and yet pisses off the league,” says Miller. “And people on the other side are saying, wait a second, it’s not about how many people have seen it. It’s about our commitment to excellence in journalism. If we see ourselves as a fundamentally aggressive and independent news organization, we need to cover the NFL the way it needs to be covered.”

Of course, it’s not a culture problem; it’s a math problem. ESPN — and every other legacy media company that relies on advertising and cable subscriber revenue — is being disrupted. ESPN has lost about 13 million cable subs since 2011, many of whom were paying nearly $8 per month.

Meanwhile, the cost of ESPN’s bread-and-butter programming — live sports — has risen as more players (from Amazon to Twitter) vie for rights. Sports accounted for 91 of the top 100 live-viewed TV programs in 2017. ESPN averaged nearly 15 million viewers for six college football bowl games last year, while this year’s NBA Finals were the most watched in two decades.

And outside of 2016, when Fox News took the top spot, ESPN has been the No. 1 cable network in primetime since 1999. Still, the network pays $1.9 billion annually for Monday Night Football and $1.4 billion a year to the NBA. It’s why Disney is pouring resources into OTT platform ESPN+, which launched in April and is doing better than expected, say executives, though they won’t disclose subscriber numbers yet. ESPN remains the digital sports leader, too, with more than 70 million uniques in May.

But ratings for its studio programming have inherently softened as scores and highlights proliferate on apps and social platforms like House of Highlights, recently purchased by Turner’s Bleacher Report.

The financial contraction has exposed rifts inside ESPN. In conversations with staffers, a narrative has emerged of a network divided over how to best navigate an increasingly on-demand, OTT future. The Six, as Smith and Hill’s iteration of SportsCenter was known, was an experiment born of necessity. But so is Scott Van Pelt’s midnight SportsCenter, and it was up 50 percent in May.

And execs are quick to note SportsCenter is not just a linear brand anymore; SC on Snapchat reaches nearly 3 million consumers a day, with 80 percent of them younger than 35. Morning show Get Up! — based at a new studio in Manhattan — and High Noon, with Bomani Jones and Pablo Torre, are distinct departures from SportsCenter. They revolve around the relationship between the hosts — and not around the highlights of the day. (Washington, DC-based producer Erik Rydholm, who is given wide latitude at ESPN, has created and oversees many of these shows including High Noon, Highly Questionable and Pardon the Interruption.)

“Norby is pushing antiquated SportsCenter stuff wherever he can,” says an on-air personality. “There are good creative people there. I don’t think it’s an accident that if you did a happiness quotient, the farther way from Bristol people are, the happier and the more productive they are.” Or as one source puts it: “It’s a battle for the soul of ESPN.”