Continue to The Hollywood Reporter SKIP AD
You will be redirected back to your article in seconds
Skip to main content
By Georg Szalai, Paul Bond
June 20, 2018 5:00am

Europe is a key battleground as Disney and Comcast tussle over large chunks of 21st Century Fox, including its 39 percent stake in European pay TV giant Sky, which has also been boosting its original output to become the high-end content juggernaut behind hits like the Julia Stiles starrer Riviera and the period drama Britannia.

For those who don’t follow the situation closely, it is a bit complicated. Comcast on June 15 got European Union clearance for its bid for Sky, which trumped Fox’s December 2016 offer for the 61 percent of the European pay TV giant that it doesn’t own yet.

The U.K. culture secretary on June 19 unveiled a Fox agreement to sell Sky News to Disney with improved funding — roughly $130 million a year over 15 years — and other commitments to seal government clearance for Fox’s Sky bid, a final decision on which will come in early July after a public comment period on the Sky News deal.

In the case of approval, Fox would then decide whether to raise its Sky bid with the blessing of Disney (given that Disney agreed to buy large chunks of Fox in December, including its stake in Sky).

“Disney has to be mindful of becoming involved in a bidding war with Comcast for the asset,” says Liberum Capital analyst Ian Whittaker. “However, ownership of Sky would seem central if Disney wanted to expand its plans to build a direct-to-consumer network in North America into Europe.” 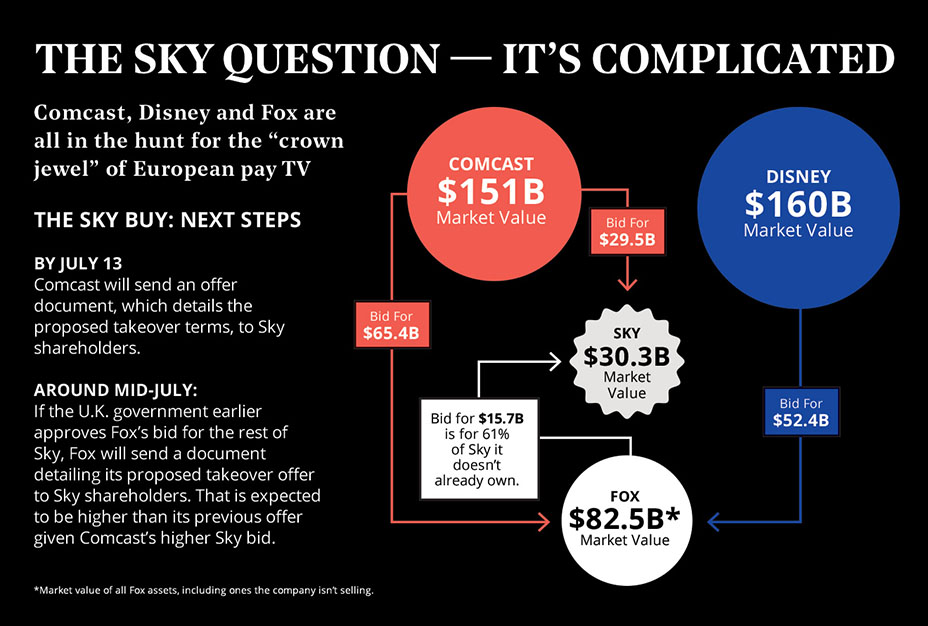 The media moguls involved have praised Sky, which operates pay TV and streaming services in the U.K., Ireland, Italy, Germany and Austria and a streaming service in Spain.  Disney chairman and CEO Bob Iger called it “a real crown jewel” and “an amazing platform.” Comcast chairman and CEO Brian Robert has called it “an outstanding company” with “a strong business” and “a consistent innovator in its use of technology to deliver a fantastic viewing experience.”

Buying Sky, which as of the end of March had nearly 23 million subscribers, would expand both companies’ international business and give them key streaming services and expertise. Analysts say Sky’s content and networks operations would be a good fit for both Disney and Comcast, while its pay TV business is clearly something the latter has all the expertise in, a potential edge over content pure-play Disney.

One banker suggests that Disney, and therefore Fox, could end up leaving Sky to Comcast, which would mean Disney would take on about $12 billion less in debt and potentially give it more financial leeway to boost its bid for the other Fox entertainment assets. But most don’t expect Disney to stand down without a fight for Sky, just like it won’t leave the other Fox assets to Comcast.

Says Buckingham Research Group analyst Matthew Harrigan, “The Fox entertainment assets and Sky’s significant entertainment, news and sports brands, alongside Sky Originals, are the last true elephant(s) on the savannah in affording even more wherewithal for Comcast and Disney to compete with Google and Facebook globally.”

Rupert's Choice: Will Fox Bet Its Legacy on Comcast or Disney?