When New Jersey Gov. Phil Murphy on July 3 signed film and TV tax credit legislation that would allocate up to $85 million per year over the next five years to projects in the state, he pledged that the move would allow the state to “regain a competitive footing.”

But the revival of New Jersey’s tax credit program arrives as states jostle ever more fiercely for major studio projects, with the payoff of boosting local economies and spurring tourism. California, where Gov. Jerry Brown signed a June 27 extension to fund a $330 million annual film and TV program through 2025, hopes to retain what would otherwise be runaway production.

“Currently, productions get the most benefit in California, New York, Georgia, Louisiana and New Mexico,” say Glenda Cantrell and Daniel Wheatcroft, authors of a new book on tax incentives. “These states all have developed a stellar incentive program.” New Jersey hopes to make it onto that shortlist, too. Meanwhile, Elsa Ramo of Ramo Law, who does a lot of independent film work, cites Ohio and Utah in addition to several of the better-known locations.

The idea behind these efforts is simple: The producer gets a tax credit equal to some percentage of qualified production expenditures. “But the devil is in the details,” says Greenberg Glusker entertainment tax lawyer Sky Moore. The percentage varies, but 20 percent to 35 percent is typical. What expenditures qualify? Usually only expenditures within the jurisdiction, but that too varies, and sometimes there’s a cap (especially on above-the-line salaries), a minimum spend, or both. So a higher percentage may not necessarily be better. It’s all a case-by-case analysis.

About that credit — what if the producer doesn’t owe any taxes in-state? That’s usually the case: The Walking Dead is produced in Georgia but monetized by New York-headquartered AMC. So the Georgia tax credit, like others such as New Jersey’s, is transferable: AMC can sell it to another taxpayer with Georgia liability. That taxpayer will demand a discount, and any intermediaries who helped find the buyer may want a cut, too. The result, says Akin Gump entertainment chair Christopher Spicer, is that transferable credits typically yield about 86 to 90 cents on the dollar.

Other states, such as New York and New Mexico, take a different approach: The tax credit is refundable — the producer files a tax return and gets cash back (though not necessarily 100 cents on the dollar). Still other states simply offer rebates or grants, without the need to file tax returns, while over a dozen states — including such former players as Michigan — aren’t in the game at all. Currently, 36 states have programs, says Entertainment Partners senior vp Joe Chianese, whose incentives team puts together regularly updated maps (see below) and handbooks.

But don’t just focus on the U.S.: Like soccer, incentives are a global game. “Canada is excellent,” says Spicer. (Indeed, Canada was a key country that kicked off film production incentives, in 1997, building on Vancouver-based runaway production that had been growing since the 1980s.)

Spicer says he’s also seeing “a ton” of U.K. and Ireland projects. Moore cites the U.K., Australia and Germany for feature films and high-gloss television series (think Game of Thrones). Even low-budget producers are in the game: “At budget levels over $1.5 million, there’s usually some tax credit” in the financing mix, says Ramo.

And incentives aren’t the only factor for producers to consider. Chianese notes that locations, currency exchange rates, talent preferences and availability of crew, soundstages and support vendors are key as well.

Marjorie Galas, a vp at the Association of Film Commissioners International, also emphasizes extrinsic factors. “Producers have to be really aware of the infrastructure,” she says, “and also of the exchange rate [when considering international locales]. If the exchange rate fluctuates, ROI may not be what it seems.” She adds that a lot of money can also be eaten up by miscellaneous expenditures such as costumes, office space and rentals. Even weather is a factor, add Cantrell and Wheatcroft.

Then, too, what works for one production might not for another. “A big show brings a lot of attention to an area, [but] a producer can get starstruck,” says Galas. All of the extrinsic factors narrow the universe, leading companies to typically prepare “four or five budgets” to compare their options, says Chianese.

Sometimes an intangible factor — politics — makes a difference. That was on vivid display back in 2010, when a dispute over unionization hit the New Zealand based production of the Hobbit films. Says Chianese, “Producers really want stability and certainty.” Cultural politics makes a difference, too: Anti-LGBT laws in some Southern states have made some producers wary.

More common are political disputes over incentives themselves, since academics often say tax credits seldom produce enough public benefit to justify the expense. While a recent study says that some states such as Georgia (which doled out $600 million in 2016) don’t even engage in adequate cost-benefit analysis, others do. Just such an analysis, coupled with economic hard times, killed off Michigan’s program in 2015, eight years after it started. And this year, even the New Jersey legislature’s analysis of its own bill anticipated “a negative fiscal net impact of indeterminate magnitude on the State, considering that the bill does not require tax credit-receiving expenses to yield a net fiscal benefit to the State.” (The governor signed it anyway.)

To that list of naysayers, add a surprising voice: attorney Moore. “The whole policy is beyond stupid,” he says. “As an economic matter, it hurts any state that adopts a program. You’re taking the money out of state. It’s insanity!” Moore — who insisted on the exclamation point — acknowledges that his clients benefit from incentives, but says “I’m an American first, and a lawyer second.”

And as a lawyer, how does he feel about incentives? “I love them,” he says. 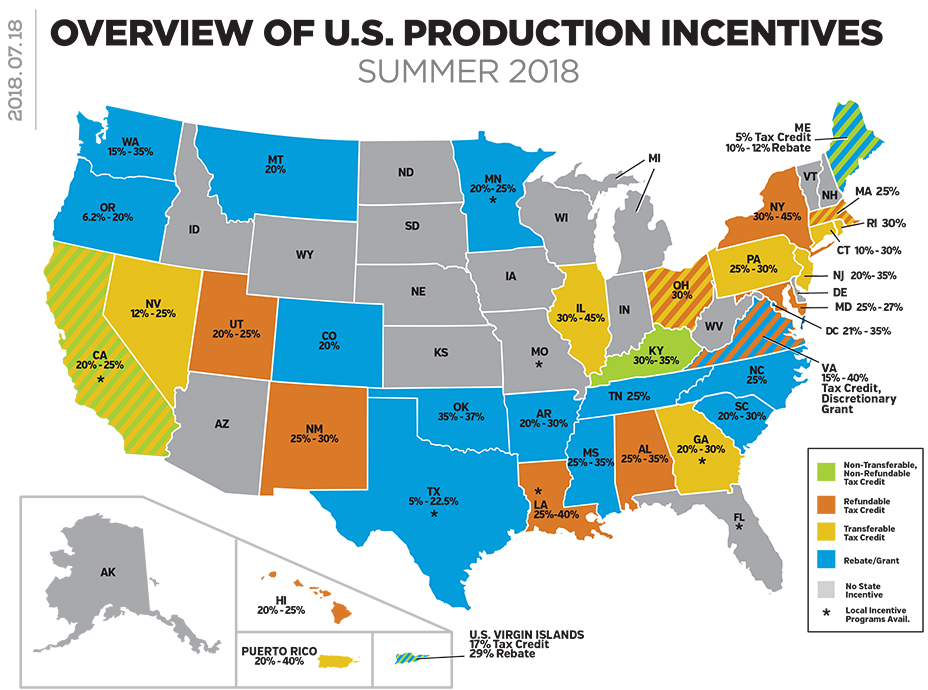