Filming in Los Angeles has declined for the first time since the industry got the greenlight to film again amid the pandemic.

According to FilmLA, month-over-month permit volume decreased in November, with application intake dropping nearly 8 percent, to 813 permits from 880 in October.

Analysts point to the 2020 election, the Thanksgiving holiday and the COVID-19 pandemic as reasons for the slowdown. FilmLA’s daily intake is now averaging around 39 new applications per business day.

Over the 24 weeks since L.A. County opened back up to on-location filming in June, FilmLA has received approximately 3,552 film permit applications spanning 2,514 unique projects.

“The November decrease in production reflects the ongoing complexity of the moment,” said FilmLA president Paul Audley. “At this point, progress for production rests, like so many things, on effective community control of COVID-19. The Greater Los Angeles filmmaking community, so fortunate to be able to remain working, continues to be mindful of safe set rules.”

TV shows that started filming in November include Hulu’s Love Victor, ABC’s Triage, FX’s Dave and American Crime Story: Impeachment, HBO’s Curb Your Enthusiasm and Netflix’s The Kominsky Method, Colin in Black and White and You. 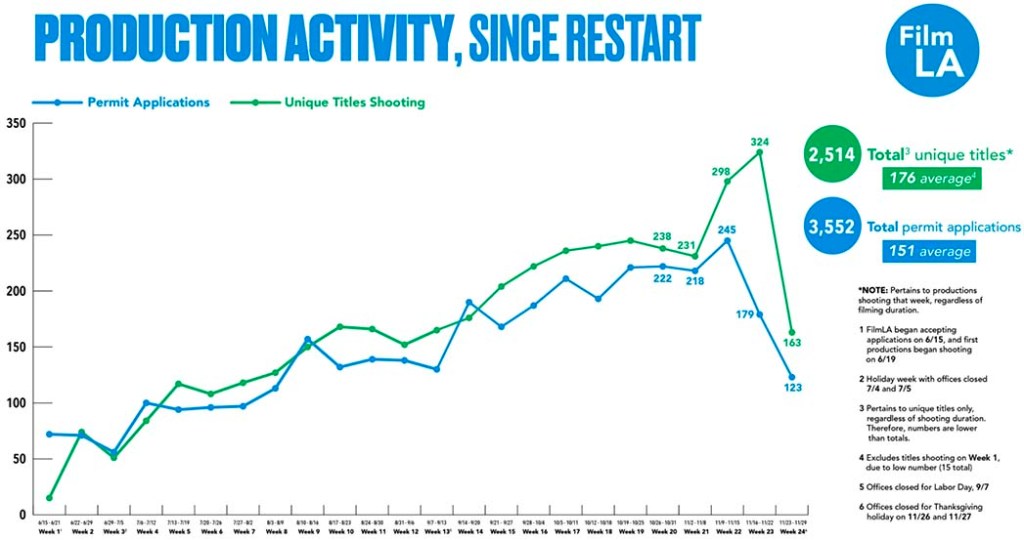