FilmLA released its latest report examining filming in the greater Los Angeles area in the month of December, revealing that film permit requests dropped a steep 25 percent compared to the prior month. Filming activity had already dropped nearly 8 percent in November — but the organization says that permit requests declined from 813 that month to 613 in December. As another comparison, there were 965 permits in Dec. of last year.

The production decline started early in the month and deepened throughout it, according to the report. The week before Christmas, FilmLA issued 143 permits, then 58 the week of the holiday (Dec. 14 to Dec. 20), and 50 the week of New Year’s (Dec. 28 to Jan. 3). With just 21 working days in December, the organization doled out an average of just 29 film permits per day — the lowest daily output it has recorded since last August.

FilmLA spokesman Philip Sokoloski says weeks prior to the recommendations, a handful of productions had planned to work through the holidays to make up for time lost earlier in the year due to the initial shutdown. “When production got its start back in September, the intention at that time was, ‘We’re going to go flat out through the end of the year and make up for lost ground now that we can,'” notes Sokoloski. “But it became evident in the early part of December that that really was not going to happen.”

Major studios including CBS Studios, Warner Bros. TV, Universal Television, Disney Television Studios and Sony Pictures Television all planned holiday hiatuses and then later opted to extend those breaks into mid-January, hoping that the virus will be more under control by then. While some studios have been planning to start up production as early as this week or next, Sokoloski says that most incoming permit requests over the last couple days have been for still photography.

Of the film permits that were doled out in Dec., television production comprised 27 percent of them. Only a handful of TV series started shooting locally in December, including CBS’ Ghosts and The 3 of US, HBO’s Insecure, HBO Max’s Tacoma FD and Showtime’s The L Word: Generation Q.

For its part, commercial production made up 28 percent of the permits. Projects that shot in Los Angeles County last month included spots for products ranged from Haagen Dazs, Honda and Mountain Dew to Carl’s Jr., Lowe’s and Progressive. 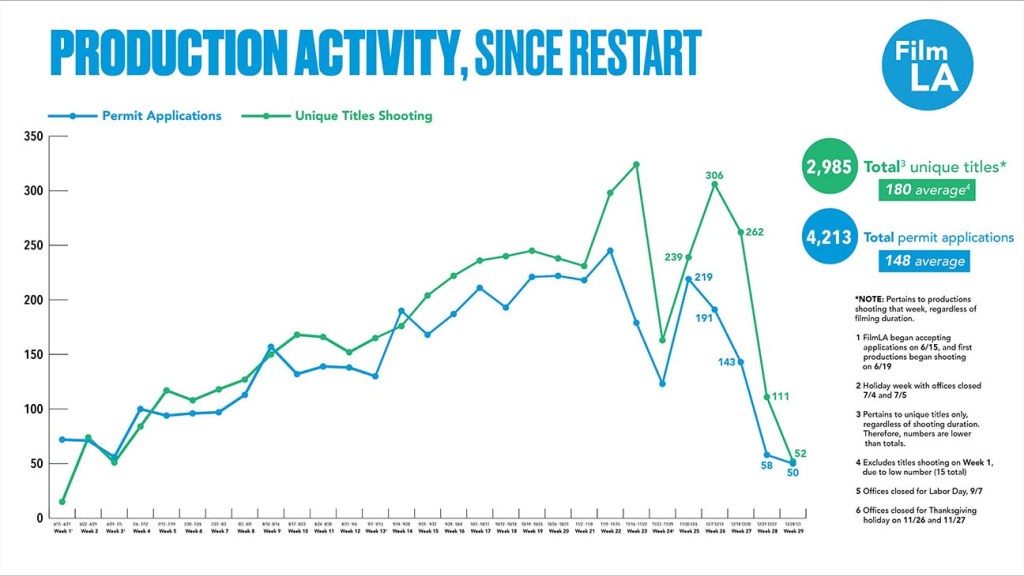