In retrospect, it seems that Peak Fox was achieved this time last year. In the ensuing 12 months, the House That Roger Built has shown its cracks. The vaunted stability of its primetime lineup has evaporated. Its much-hyped prowess in ratings is tarnished (it fell to third place in the 25-to-54 demo for the week of May 15, its first weekly loss in 17 years). Its political steamroller, which culminated in the surprising election of Donald Trump, has encountered roadblocks.

Fox News under the leadership of Roger Ailes defied the normal rules of television, which dictate that a lineup must constantly renew itself to remain stable. With the exception of the introduction of Megyn Kelly, his hosts in the spring of 2016 were the same as in the previous decade. Sean Hannity and Bill O’Reilly had been at FNC since its foundation, Greta Van Susteren since 2002. Yet in less than a year since Ailes’ ouster amid sexual harassment lawsuits, his network’s primetime lineup has been dismantled and, with it, the ratings crown. If Roger Ailes had not died from a fall, he might have died from a broken heart.

To be sure, Fox News would not have been immune from decline even without the exposure of allegedly predatory and sexist working conditions. The onset of cord-cutting means that the cable TV industry as a whole enjoys diminishing returns. And under Ailes, who cut his teeth in daytime syndication with Mike Douglas, FNC was never forward-looking technologically: Neither its producers nor its elderly audience (median age: late 60s) have demonstrated the same verve for digital video as they have for old-fashioned television.

Furthermore, the worldview that Fox had embraced during its two-decade rise under Ailes — reactionary embattlement, nostalgia for a golden age, resentment against multicultural modernity — is harder to sustain when the political battle has been won. Just as outrage against an Obama administration had been ratings catnip for Fox earlier in the decade, so now Maddow and her MSNBC colleagues are beginning to reap the reward of rabid opposition to Trump and the Republicans, who control all levers of federal power.

Michael Wolff at Roger Ailes' Funeral: Loyalists Celebrate in an "Act of Defiance"

In Ailes’ obituaries, much has been made of the role of Fox News in fostering political polarization and news consumption in echo chambers, where audiences hear only the talking points they are predisposed to embrace. Yet the recent upheaval in the cable news ratings race serves as a reminder that echo chambers are not so tightly soundproofed.

Cable news channels are, after all, journalistic enterprises, not political propaganda arms — and the substandard and thoroughly un-Ailes-ian journalistic response at Fox News to the travails of the Trump administration must be considered a factor in its inability to boost its audience size at the same rate as its rivals in this time of intense political curiosity.

Viewers — not just Trump-hating Maddowphiles, but all viewers — turn to cable news for understanding, explanation and, yes, ideological talking points they can use in arguments with their friends and family. Why was the FBI director fired? Was Michael Flynn, Trump’s former National Security Advisor, friendly with the Kremlin? News consumers do not want to be told that those questions are phony and manipulated, not worth asking.

Under Ailes, Fox News always had a unified set of talking points issued from the top down on the major issues of the day. Ailes would make sure that Fox had a theory of the case and an object of attack. It was never his network’s style to crawl into a defensive shell and avoid the facts. Under Ailes, Fox would have tackled those questions head-on.

Under current management, viewers are tuning in to find evasion and denial. No wonder its rival channels are gaining ground. 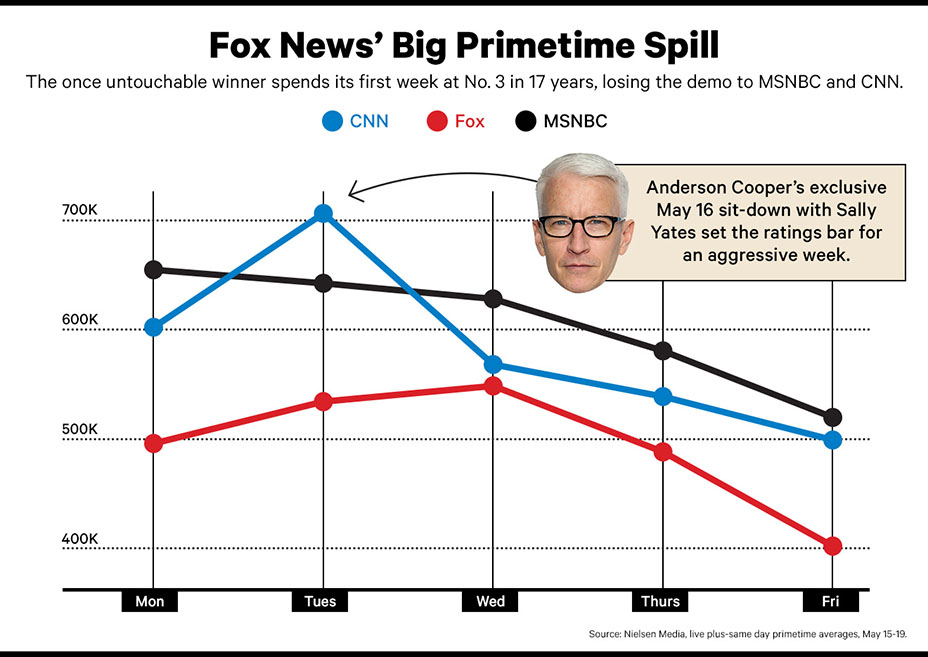 Tyndall is an independent news analyst and publisher of The Tyndall Report.

A version of this story first appeared in the May 24 issue of The Hollywood Reporter magazine. To receive the magazine, click here to subscribe.