Harvey Weinstein criminal lawyer Ben Brafman offered a candid and detailed preview Thursday of his defense strategy, accusing law enforcement of grave misconduct during the investigation and arguing the former mogul charged with sexual assault has become a scapegoat for an entertainment industry “defined by sex.”

Speaking on a panel behind closed doors in front of a small group of New York lawyers, Brafman railed against what he called the excesses of the #MeToo movement, telling attendees that it could be “very dangerous in a democracy” to “criminalize stuff that isn’t criminal” and that the “movement has a danger of… undoing some of the progress” made by women in the struggle against workplace harassment and discrimination. He touched on the Brett Kavanaugh confirmation hearings — which he labeled a “circus” — and drew parallels to what he deemed to be the rush to judge Weinstein in the media. He also lashed out at actress accusers Gwyneth Paltrow and Rose McGowan as “quintessential non-victims.”

“It’s kind of amazing to me that an industry that is defined by sex is now taking the position that it’s one man’s fault that all of this nonsense went on for 30 or 40 years,” Brafman said. “Is he part of the problem? Yes. Is the problem going to go away if the case against Harvey Weinstein ends in a conviction or an acquittal? No.”

Brafman, sounding like he was speaking to a jury rather than a collection of about 30 Manhattan attorneys gathered to hear about the legal fallout of #MeToo, struck an alarmist tone about the stakes in the Weinstein case. His comments suggest the Weinstein trial could become a highly politicized referendum on the proliferation of misconduct allegations against powerful men in media and elsewhere.

“We have lumped together decades of inappropriate behavior with allegations of intentional criminal conduct that could expose you to life in prison,” he told the panel, which featured attorneys on all sides of the #MeToo issue and was moderated by The Hollywood Reporter legal expert Eriq Gardner. “And we don’t send people to prison because they are offensive in how they interact with coworkers. We don’t do that. If we did that, then nobody would be walking around.” Brafman added: “Once we give up on the integrity of the process, none of the people in this room are safe and it becomes a much more dangerous world for all of us.”

Weinstein is charged in New York with several counts of sexual assault against production assistant Mimi Haleyi and an unnamed second accuser. Earlier this month, Brafman succeeded in knocking out a criminal charge related to the alleged rape of a third woman, Lucia Evans, after prosecutors acknowledged that the lead detective in the case had failed to disclose exculpatory evidence. A friend of Evans had told investigators that Evans had given a different account of the incident in question.

Although several other women (including McGowan) have accused Weinstein of rape, and dozens of others (including Paltrow) have alleged harassment, those acts aren’t the subjects of the criminal charges. Nevertheless, an open question in the case is whether these other accusers will be allowed to testify against Weinstein. If so, as happened in the sexual assault case against Bill Cosby, they could bolster the credibility of Haleyi, who says Weinstein forcibly performed oral sex on her in 2006 inside his SoHo home, and the other woman, whose relationship with Weinstein the defense team has argued was long-lasting and consensual.

Brafman, a former prosecutor turned high-profile criminal defense lawyer, zeroed in on what he called the weaknesses of the prosecution’s case.

“It’s stunning to me,” he said, again sounding like he was arguing the case in court. “The kind of stuff that’s unfolding in the Weinstein case never happens, or rarely if ever happens, where witness after witness tells the story of being pushed by detectives to perhaps lie or color her testimony or keep exculpatory information from the prosecutor.”

The comment came hours after it was revealed that prosecutor Joan Illuzzi-Orbon sent Brafman a two-page letter revealing that a detective had advised one of the accusers to delete personal information from a cell phone before handing over her device.

In his talk, Brafman also targeted Paltrow and McGowan, resulting in a seething eye roll from one panelist, Kalpana Kotagal, the attorney who co-authored the “Inclusion Rider” that several Hollywood companies have adopted. (Other panelists at the event, sponsored by the New York State Bar Association’s Entertainment Arts & Sports section and held at the offices of the Arent Fox law firm, included sports specialist Jennifer O’Sullivan and employment litigator Greg Chiarello, who would later take the mic from Brafman to express concerns about what Brafman had said.)

“Rose McGowan, who credits herself with starting the #MeToo movement, there isn’t a prosecutor in the world who would use her as a witness,” Brafman said. “She has completely self-destructed because she has, in my opinion and the opinion of almost every law enforcement person who came in contact with her, lied repeatedly, most recently in the drug case in Virginia where she’s charged with possession of drugs that were in her wallet that was found under her seat on an airplane. And her defense was that ‘Harvey Weinstein planted the drugs in my wallet.’”

Paltrow, according to Brafman, simply complained of “an inappropriate pass that Mr. Weinstein made 25 years ago” and continued to work closely with him. “After that, she made a dozen movies with Harvey Weinstein. Made hundreds of millions of dollars with Harvey Weinstein. Invited him to speak at her events as her mentor, as her uncle, as her close friend and ended up winning a couple of Oscars.” (Paltrow has won only one Oscar, for acting in the Weinstein-produced Shakespeare in Love.)

Paltrow’s and McGowan’s claims are not on trial in New York, but Brafman said they are indicative of what he’s up against: “Now that I’m in the mix and I’m drilling down on the allegations, I’m beginning to say ‘OMG, you know, I think this woman may have lied. I think this woman may have taken advantage of an opportunity to come out now.’ It’s easy to take a shot at him and move offensive verbal behavior into the criminal arena where it doesn’t belong.”

The audience of attorneys at the panel was respectful but seemed highly skeptical of Brafman’s claims.

Chiarello discussed how a benefit of the #MeToo movement was that it allowed other women to identify with accusers and come forward with their own stories. He defended Paltrow as not seeking anything but merely sharing something that she saw as consistent with other accounts of Weinstein’s behavior. He said Brafman was missing the point and said there needed to be accountability for inappropriate behavior. “To focus on what is criminal is counterproductive to the #metoo movement and creates a standard that if it doesn’t rise to criminal, we shouldn’t care about it,” he added.

“I was at a Knicks game last night and now that I’m Harvey Weinstein’s lawyer and I’m on television more than I ever have been, I’m recognized,” he said.

“Strange women come up to me and wish me death,” he continued. “They say ‘I hope you die.’ I say ‘That’s very sweet. I hope the rest of your family is nicer than you are.’ But there are a lot of women who come up to me and say that ‘it’s very important that you have the guts to do the work you do’ and it’s important not just for Mr. Weinstein but it’s important for the women who are watching this case that the case be handled well and that it not turn into the circus that unfortunately the Senate Judiciary Committee hearings [of Justice Brett Kavanaugh] turned into. Nobody benefitted from those hearings. It was an embarrassment to watch them.” 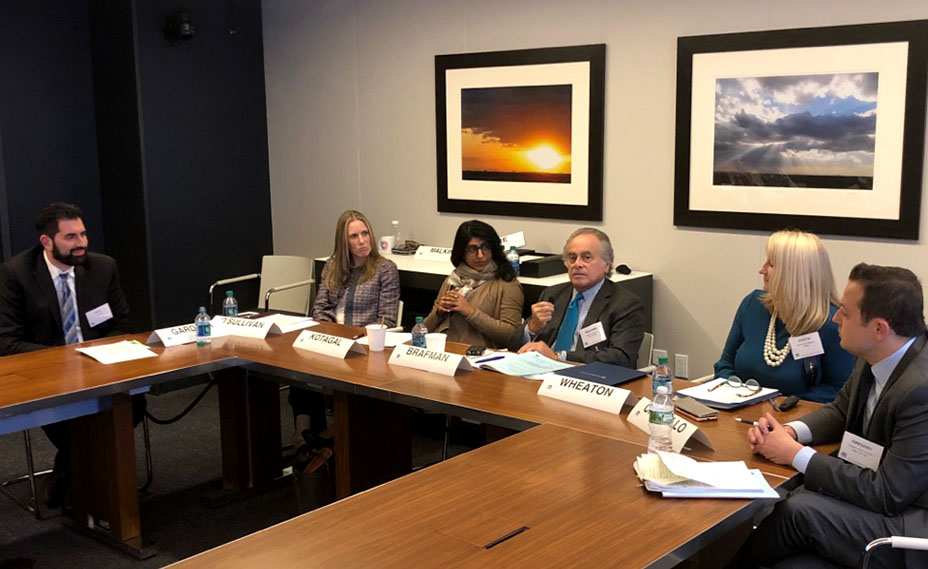