On a street typically lined with superheroes and Disney characters, Batman, with precious few tourists to greet, sits on a quiet corner doing crunches.

This is Hollywood Boulevard today, nine months into the pandemic-induced shutdown that has stripped the tourist destination of its usual 10 million annual visitors who clamor to take photos with costumed street performers and pose with their favorite celebrity’s star.

“The pandemic has canceled what I do for a living,” says another street performer, Mark Roman, who for the past six years has worked on the boulevard as Captain America and Reno 911!-inspired Lieutenant Frank. He has not busked since COVID-19 hit, partly because he cannot naturally incorporate a mask into his costume. “I don’t know how I’m going to financially survive,” says Roman, who has attempted to replace the money he once made from tips with background acting gigs and personalized videos on Cameo, “but I’m trying to figure it out.” 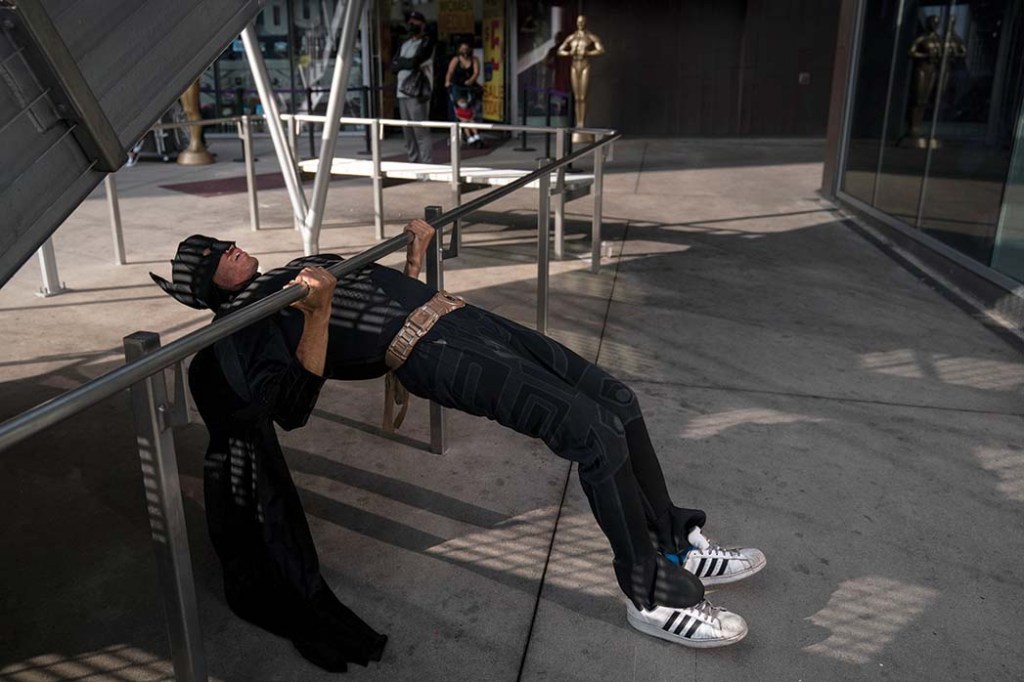 Much of Hollywood Boulevard is shuttered, with such crowd favorites as the Dolby, El Capitan, Chinese Theatre, Ripley’s Believe It or Not and Hard Rock Cafe closed since March. Madame Tussauds opened for two days in June, says GM Ed Bell, before it was reshut by county rules. According to the Hollywood Partnership’s third-quarter report, 185 businesses remained closed in the area as of September. “Seventy-five percent is boarded up, and that’s depressing,” says Musso & Frank Grill COO Mark Echeverria. “It never really saw any kind of larger-scale reopening.”

The street’s biggest draw is the Hollywood Walk of Fame, which has seen its signature star dedication ceremonies derailed. Since the pandemic began, the committee has introduced only one new star: Anthony Anderson’s, dedicated via a virtual ceremony in August. The others scheduled for 2020 were pushed. “They want the hoopla,” says Walk of Fame producer Ana Martinez. “They want the fans there, they want more family members.” 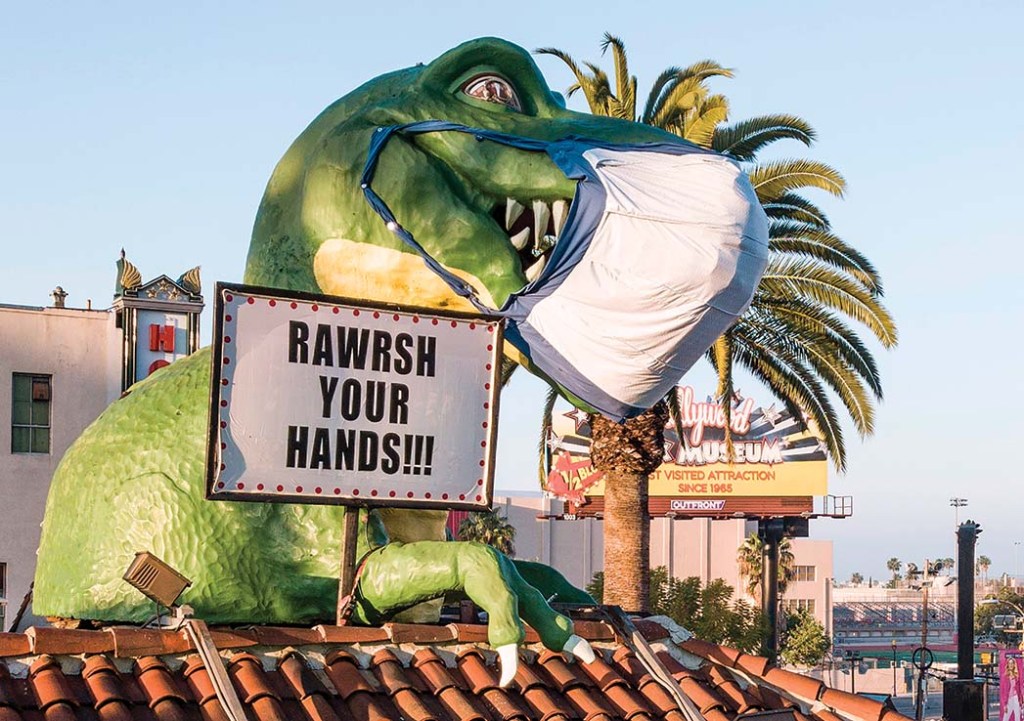 The cancellation of the ceremonies, plus the red carpet premieres that would take over Hollywood & Highland at least once a week and the transition of Jimmy Kimmel Live!, which films at the El Capitan, to no audience, means even those who came just for the chance of spotting a famous face have little reason to visit.

And while other L.A. areas have been revived on the backs of their restaurants — at least until the reclosing of outdoor dining on Nov. 25 — Hollywood Boulevard poses unique challenges.

Musso & Frank, now 101 years old, relied heavily on the lunchtime rush from nearby studios and offices, which has ceased during the work-from-home era. After shutting down completely for months, the owners briefly dabbled in takeout options and looked into opening a dining area in its parking lot, Echeverria says.

“I reached out to many, many, many of our real loyal customers and I asked them point blank, ‘If we had tables in the parking lot, would you guys want to come?’ And I didn’t get a single yes,” he says, with the top concern being safety in the area. 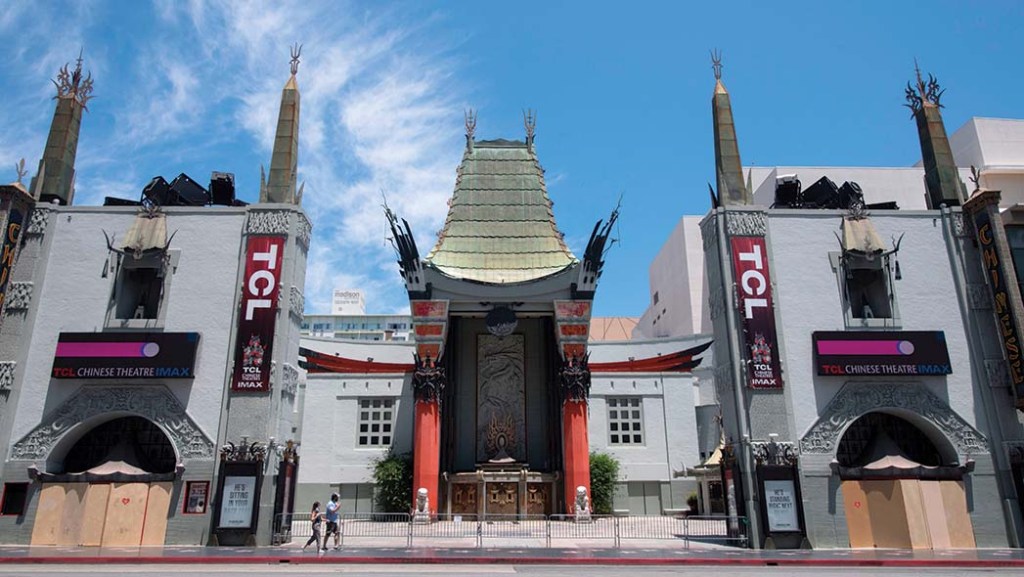 Homelessness and crime long have been an issue on the boulevard, only increasing as visitors have dropped off and the pandemic has decimated the economy. Mel’s Drive-In, on Highland just below Hollywood, hired nightly security after several break-ins, says owner Colton Weiss, though the restaurant was able to set up a safe outdoor eating space in the parking lot. But he’s concerned about overall safety in the area: “I don’t know what we’re going to do in Hollywood right now, honestly,” he says.

One bright spot: hotels, which according to the Hollywood Partnership, have increased occupancy from 24 percent in the second quarter to 44 percent in the third (but down nearly 50 percent from 2019). The Hollywood Roosevelt has seen a jump in locals booking “workcations” — where guests can get a poolside cabana suite for a day’s use — says managing director Don Jacinto. The hotel also has innovated to host drive-in movies, rooftop yoga and streaming events, like an album release for singer-songwriter Blackbear in October. Starting Dec. 7, though, hotels were hit with a stay-at-home order outlawing nonessential stays, largely reshuttering them.

As the once-thriving neighborhood quietly closes out 2020, it may look very different when it returns. While Echeverria urges property owners to bring in more quality tenants to fill vacancies, Roman is unsure whether the street life will ever be what it was.

“The heyday of busking on Hollywood Boulevard is over,” says Roman, noting there had better be several vaccines with Dr. Anthony Fauci’s approval in wide circulation for him to think about returning. “Fall of next year, that’s the earliest, best-case scenario for when I’ll feel comfortable going out in public and busking again.”