As of the end of October, nearly 152 million Americans were working, the Bureau of Labor Statistics disclosed Friday. But the entertainment and media sectors are not sharing the good times, as mergers and acquisitions and the layoffs they typically cause appear to be taking a toll. Hit hardest is sound recording and film, where jobs are off 4 percent year-over-year while overall U.S. employment has risen more than 1 percent.

For years, Disney had been in hiring mode, closing fiscal 2018 with 201,000 employees, up from 199,000 the prior year, according to filings, though it has slashed at least 400 jobs since closing its $71 billion deal for most of 21st Century Fox in March, and insiders predict 3,000 layoffs will eventually be attributed to the partial merger. Analyst Richard Greenfield of LightShed Partners has speculated the number could swell to 10,000 as the conglomerate seeks its goal of $2 billion in cost synergies by fiscal 2021.

Over at AT&T, the carnage is more muted, given there was less overlap in job functions when the telecom giant scooped up Time Warner in June 2018 for $85 billion: 13 months later, 20 ad sales jobs were reportedly slashed and there were about 50 layoffs in a variety of positions at HBO, Turner and Warner Bros. in October, for example. 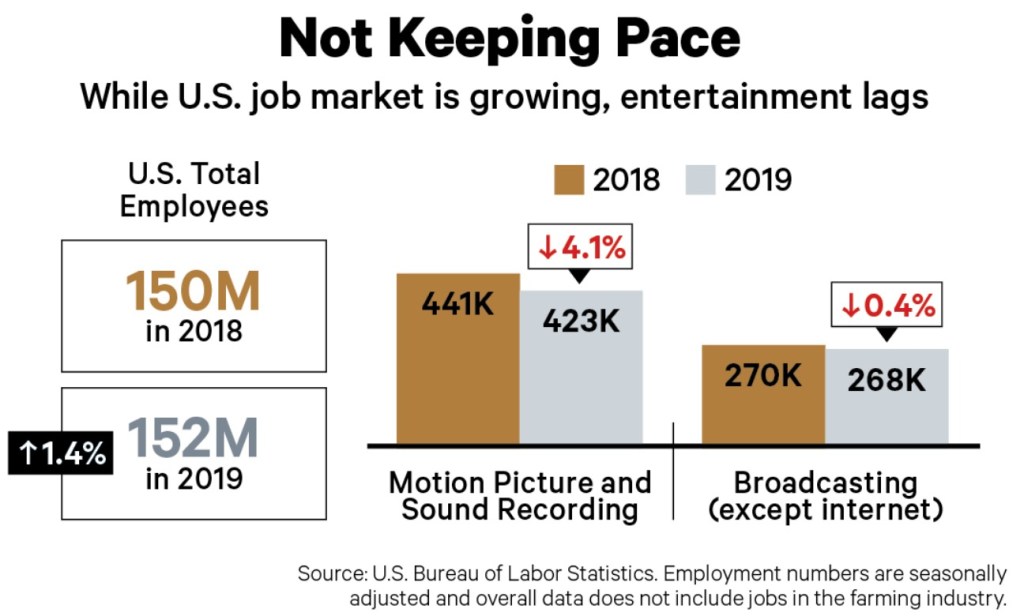 While not all layoffs in the entertainment and media sectors are related to mergers, they certainly don’t help, and Greenfield figures some 2,000 jobs could be lost after Viacom and CBS merge, though he acknowledges his estimate could change when CEO Bob Bakish gives “a real synergy number.” In a recent filing, though, the companies said cost synergies could hit $540 million in 2020 and $653 million in 2021.

Indeed, Bakish has been wishy-washy about his predicted $500 million in synergies, telling CNBC on Sept. 17, “It’s a cost-only number — It’s a synergy number that will drop to the bottom line. … So that’s a bankable number. … Sure, we have higher numbers we’re looking at.” Employees speaking on the condition of anonymity hear that as an ominous sign. “Of course there will be layoffs. We’re on pins and needles here,” says one staffer.

Viacom had 10,400 full-time employees as of Sept. 30, while CBS employed 12,770 full-timers at the end of 2018, according to filings. If Greenfield’s initial estimate is correct, 9 percent of those jobs are at stake. But some employees figure ViacomCBS could scoop up smaller companies — Lionsgate and/or its Starz asset, for example — which would lead to more synergies, and layoffs.

The BLS says broadcasting jobs fell less than one percent year-over-year in October, with TV taking a hit while radio jobs actually rose a bit. The BLS hasn’t yet disclosed October figures for a few smaller categories related to media, though all were down in September 2019 relative to 2018, save for radio broadcasting.

Of course, there may be an upside for those fortunate enough to survive the chopping block. “Big is not necessarily bad,” says analyst Steven Birenberg of Northlake Capital Management. “For employees, you can argue it is a good thing because scale really matters in today’s world of TV, and neither Viacom or CBS has scale. Combined, that scale should allow the companies to better compete, which is good for employees as it keeps them employed.”

The data isn’t great even in the film studios’ own backyards, as the number of “shoot days” for on-location filming in Greater Los Angeles dipped 5.2 percent in July through September, FilmLA disclosed Oct. 24. The research organization dubbed the decrease “atypical, and unusually at odds” with local employment trends. Despite a California Film & Television Tax Credit program that refunds up to $330 million each year, productions apparently continue to flock to other states with heftier incentives.

There is one bit of good news for media and entertainment workers in the BLS numbers: Their average hourly wage is north of $37 an hour, about $9 more than all other non-farm, non-government jobs in America.