“Reality is how you perceive it. You can change that perception of reality — dictate it.” Most journalism barons don’t deal in metaphysics. For digital upstart Sean Adl-Tabatabai, 36, who talks of “the holographic nature of the world,” and his husband and business partner, Sinclair Treadway, 24, it could be a credo.

Your News Wire, their 3-year-old website of murky fact and slippery spin, has in the past year helped usher Donna Brazile out of her CNN gig and foment the Pizzagate frenzy with a key early post (which has generated 28,000 Facebook shares), all from an unlikely HQ for an alt-media operation: the couple’s live/work apartment at the historic El Royale (sometime home to the likes of Katie Holmes, Josh Brolin and Cameron Diaz) in L.A.’s Hancock Park.

Now YNW is emerging alongside the more high-profile Breitbart as an integral player in the Trump era’s L.A. alt-media axis. Despite Google’s decision to cut off YNW’s ad revenue and fact-checking site Snopes‘ relentless efforts to debunk its incendiary reports, its founders are more energized than ever, as Treadway puts it, “to focus on what people aren’t focusing on — the information that the public isn’t already being told.”

Like fellow outsider outlets (most notably Infowars, with which it periodically trades tips), YNW, whose output has been labeled fake news and Trumpist propaganda by critics, is fueled by populist politics and social media shares. Those in Hollywood retweeting its links include EL James (a story speculating on the origins of unknown “sky trumpet” sounds heard across Europe), Elijah Wood (an article concerning GMOs and cancer) and James Woods (a report that a former Haitian government official due to testify about alleged Clinton Foundation misdeeds was found dead in Miami). 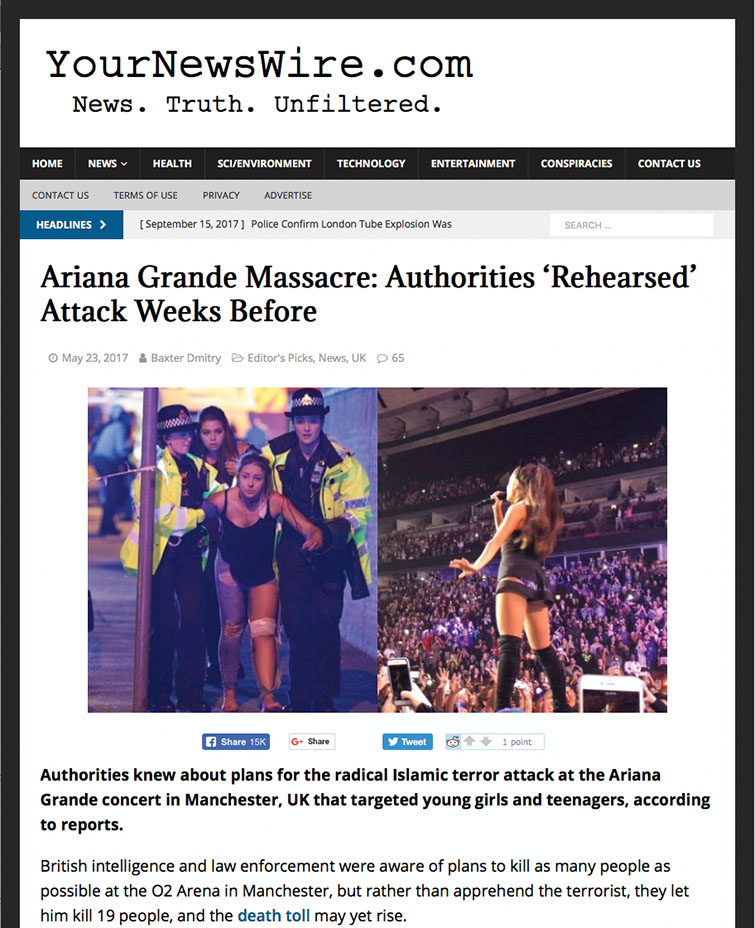 The outlet’s most devoted celebrity reader, however, is likely Roseanne Barr, who has repeatedly shared with her social media followers YNW’s coverage of everything from Benghazi to Pizzagate. “We’ve communicated a couple of times — I have the emails,” says Adl-Tabatabai, who notes that the “kooky” Barr also has written to him to “slam” stories. “She’s frank, opinionated — our perfect audience.” (Barr didn’t respond to a request for comment.)

While YNW fields plenty of tips, most of which Adl-Tabatabai deletes (“I’ll get quite a lot of, ‘Kanye West is being readmitted to the hospital due to MKUltra,’ that he’s being mind-controlled”), the editorial approach of its tiny, work-from-home staff is chiefly to identify and highlight overlooked nuggets published elsewhere, then recirculate them with provocative new angles. They pull material from disparate outlets, whether Iranian state-backed TV or right-leaning Circa (owned by the conservative Sinclair Broadcast Group), usually pinpointing details tucked far down in articles or hidden away in obscure government reports.

Alienated liberals, the two share a suspicion of established stories and presumed facts that borders on the radical. Adl-Tabatabai’s views are informed by what he sees as British media’s failures during his formative years — cheerleading the Iraq War, ignoring rumors of BBC host Jimmy Savile’s sexual abuse of children — while Treadway’s are forged by a conviction that Bernie Sanders, whom he ardently supported during the Democratic primary, wasn’t given legitimate consideration by the press.

They are critical of Donald Trump on some policy points (including his transgender military ban) but view him as a salutary influence in politics. “He may be a buffoon, and he may make some really bad mistakes during his presidency, but he’s still an anti-establishment figure,” reasons Adl-Tabatabai. “A vote for him was a vote to smash the system.”

Adl-Tabatabai grew up middle class in a “very open-minded household” in North London; his Iranian father was an accountant, his English mother (who now writes for YNW) an alternative health practitioner. An early interest in acting (he was a teenage extra on the BBC’s Grange Hill) led to behind-the-camera production work, eventually at MTV UK, where he toiled on a planned program examining conspiracy theorists. One episode was to focus on British author David Icke, notorious for his Holocaust denials and belief in a global fascist plot by shape-shifting reptilians.

Adl-Tabatabai found many of Icke’s ideas “very, very out-there,” but others were “compelling,” particularly Icke’s metaphysical notion of reality. “That interests me a lot.” When Icke revealed that his family had for years been harassed for his beliefs, Adl-Tabatabai advised him against participating in the show. Soon after, Adl-Tabatabai went to work for Icke as a webmaster and producer. In 2013, seeing the rise of Alex Jones’ Infowars across the Atlantic, the two decided to cook up their own internet TV station, The People’s Voice.

It never got off the ground, and Adl-Tabatabai says their partnership faltered when he revealed to Icke that he’s gay. “I wasn’t in the closet, but it was news to him,” he says. (He and Treadway, whom he met during a trip to L.A., received international attention in March 2014 when they became one of the first same-sex couples to be married in Britain.) 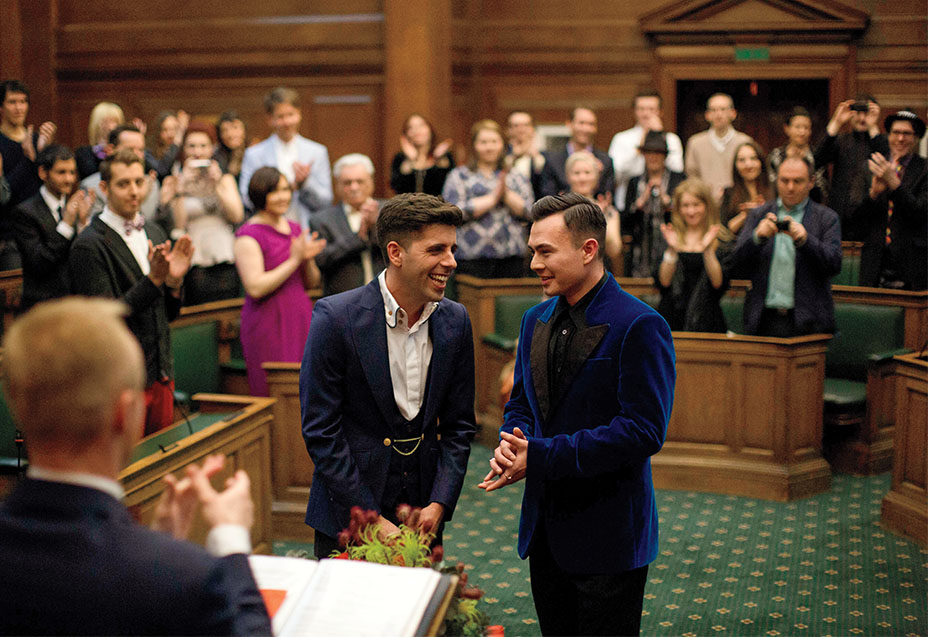 Icke calls this claim “outrageous. I couldn’t care less what anyone’s sexuality may be.” He adds, “I care only about their character — what they do and say. I withdrew from any connection with him after seeing him at close hand at The People’s Voice.”

He also alludes to litigation, instigated by Adl-Tabatabai, in which Icke prevailed. Adl-Tabatabai says he did pursue a lawsuit “to try to recover lost wages” after he and Icke parted ways “and to address David’s public claims that I had been the reason TPV had failed.” He dropped it, he claims, when he ran out of cash.

Broke, Adl-Tabatabai and Treadway moved that summer to Treadway’s parents’ home in Simi Valley, an hour north of L.A. While Adl-Tabatabai looked for production jobs, the pair began posting links — “as a hobby,” he says — on the populous Facebook page for The People’s Voice, over which he’d retained control. This curation endeavor would soon birth Your News Wire.

In the months after Trump’s election, several British papers published accounts criticizing YNW as a purveyor of fake news, with one reporting that a European Union task force set up to combat Russian propaganda had classified the outlet as a proxy. While the couple acknowledges that state-sponsored Russia Today is a favored source (“They have angles,” notes Adl-Tabatabai, “and sometimes their angles vaguely match our angles”), they deny any links to the Kremlin. Such a claim, contends Adl-Tabatabai, is “part of an overall political game that’s being played by big corporate media outlets to purge independents.”

The negative attention has had a bottom-line impact. Google AdSense dropped YNW from its network, resulting in what Adl-Tabatabai notes was a 60 percent drop in revenue (he declines to reveal dollar figures). He says he learned from a “brutally honest” discussion with an AdSense rep that there are internal divisions at Google over whether to work with publishers like YNW. “The thing that infuriated me most is that Google itself admitted to me that they didn’t view us as a ‘fake news’ website,” he says.

In a statement provided to THR, Google writes, “We don’t comment on specific sites, but if a site violates our policies, whether intentionally or not, we take quick action and stop serving ads to that site.” The couple’s site briefly appeared under another banner, NewsPunch, in early September — Adl-Tabatabai says “the decision to rebrand [had been] brewing for a while” — and was an AdSense site again. Google wouldn’t reveal whether it was aware that NewsPunch was simply YNW with a new logo and tagline. At any rate, the site within days reverted to Your News Wire — because of technical difficulties, says Adl-Tabatabai, who adds it’s still “moving toward a rebrand.”

He and Treadway regularly find themselves in the sights of Snopes, the web’s best-regarded fact-checker, which wrote in May of YNW’s “track record of promoting false information.” (It attempted to debunk the publication’s false-flag conspiracy reporting the British government knew in advance that Ariana Grande’s May 22 concert in Manchester would be bombed but “‘allowed’ this attack to happen in order to justify cracking down on the innocent population even further.”) Snopes head David Mikkelson observes that the couple also has a history of publishing what he considers defamatory claims about his own operation, and Snopes‘ legal counsel has sent cease-and-desist notices.

Given Snopes‘ role as one of Facebook’s official partners in efforts to address the spread of misinformation, Adl-Tabatabai says he has been weighing his options for a campaign against what he sees as a competitor with an unfair stranglehold on dictating reality — a move right out of Trump’s anti-press playbook. “We’re all now questioning reality as it’s being handed down, how it’s interpreted, how it’s portrayed,” reasons Adl-Tabatabai on the rooftop of the El Royale as Treadway nods. “The audience itself is already questioning the facts.”