The marketing teams for the major upcoming competitors to Netflix have some more work to do: Despite a plethora of news stories about them, about 40 percent of American adults still don’t know that WarnerMedia and NBCUniversal have subscription services in the works, while 30 percent are unaware of a Disney product dubbed Disney+, according to a new Hollywood Reporter/Morning Consult poll.

Meanwhile, some analysts are increasingly skeptical that the newcomers, even though they come courtesy of giant entertainment companies with plenty of content to deliver, will have much luck overcoming the huge first-mover advantage that Netflix enjoys with its 139 million worldwide subscribers.

Moreover, Netflix added 5.4 million subscribers in the U.S. in 2018, more than any year since 2013 when it added 6.3 million, notes BTIG analyst Richard Greenfield. This despite significantly more competition than back then, with Amazon Prime Video, Hulu, CBS All Access and HBO Now also clicking with consumers in a significant way nowadays.

Netflix “reaching 80 million U.S. subscribers no longer sounds crazy the way it did a few years ago,” says Greenfield, and that spells trouble for those who are coming late to the streaming party.

According to the THR/Morning Consult poll, which surveyed 2,200 adults from Jan. 17-19, Netflix is pushing the limits of its pricing power. Its most premium offering, a $16 product, is at the top end of what survey respondents say the “acceptable range” for a service with unlimited movies and TV shows is, at $10-$16 monthly. NBCUniversal’s streamer to debut in 2020 will have commercials, and the poll indicates an acceptable range for such a service is $8-$12, though Comcast cable subscribers will get it free, at least at launch. 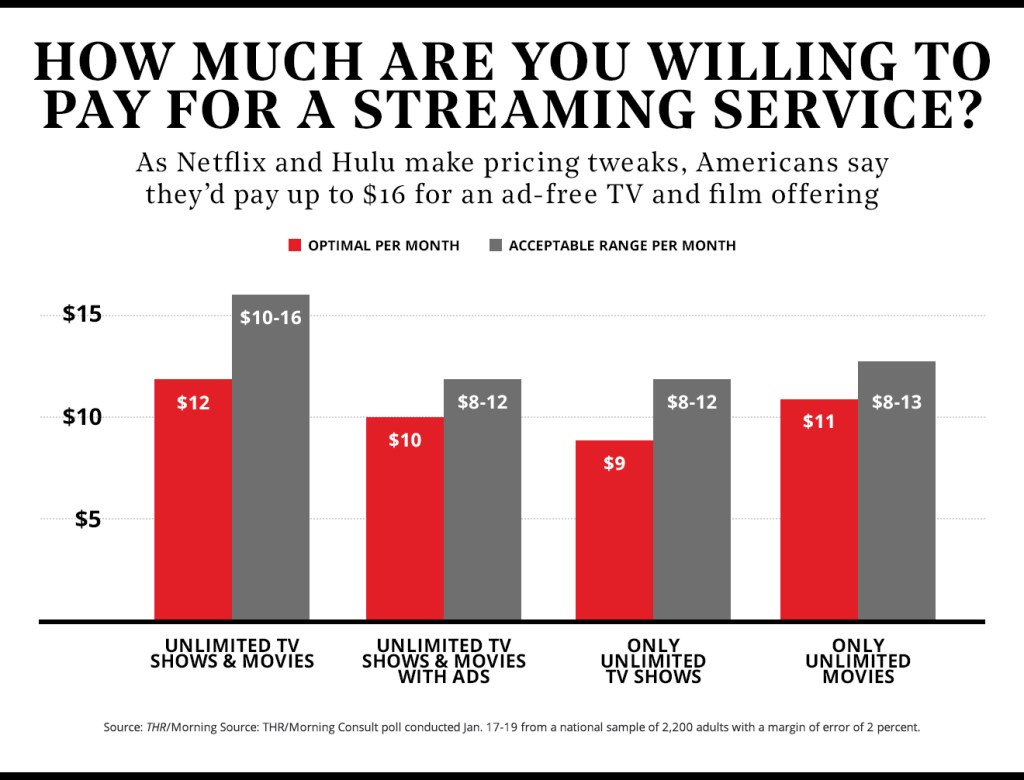 Disney, for example, hasn’t announced pricing or a launch date, but Greenfield guesses it will debut around Oct. 1 at a price of roughly $7 monthly, and will sign up 2 million subscribers by the end of 2019. After a recent price hike, Netflix’s three plans are priced at $9, $13 and $16 a month.

Since Disney is protective of its family brand, it will understandably limit the type of content it will carry on the Disney+ platform mostly to Pixar, Marvel, Lusasfilm and NatGeo (which it will get via its partial acquisition of 21st Century Fox), along with Disney-branded fare, such as Mary Poppins Returns and Frozen.

Even if Disney+ is a hit with consumers, it may not be with investors, says Greenfield, who figures Disney+ needs about 7 million subscribers just to make up for the roughly $500 million it won’t be getting each year from licensing content to Netflix. “Then add in original content television and movie production, technology spend, marketing expense and customer care,” he says, and “It continues to boggle our mind that Disney wants to compete with Netflix versus remaining an arms dealer to whoever will pay the most for their content.”

Netflix CEO Reed Hastings indicated in a letter to shareholders this month that he doesn’t worry as much about streaming competition as he does about time consumers spend playing Fortnite, which Epic Games says is played by 125 million people. “We compete with (and lose to) Fortnite more than HBO,” the exec wrote. “Our focus is not on Disney+, Amazon or others, but on how we can improve our experience for our members.”

While some analysts speculate that WarnerMedia, owned by AT&T (which also owns DirecTV) and NBCUniversal, owned by Comcast, might have an advantage over Disney via their existing subscription relationships with internet, cable and satellite TV users, Jimmy Schaeffler of The Carmel Group sees Disney+ as being the one to beat — among newcomers, at least.

“Americans will truly embrace these three new streaming services when consumer word of mouth begins to extoll the amazing virtues of true quality original content,” says Schaeffler. “Even really good marketing can only go so far to promote these new services if the programming doesn’t measure up. For Disney, delivering that content will have a head start over the others, because of the family fare and brand-name recognition.”

Of course, for WarnerMedia, NBCUniversal and Disney+ to succeed, they won’t need to steal share from Netflix, they just need to convince consumers to subscribe to multiple services; Bruce Leichtman of Leichtman Research Group says 43 million U.S households already use more than one streamer.

But any way you slice it, more streamers equals pain for some and could lead to — stop us if you’ve heard this before — a period of mergers and acquisitions in the industry.

“As for the existing streaming services, including Netflix, all will suffer because of the new competition,” says Schaeffler. “Eventually, however, we will see a few rise to the long-term top, consolidation and failure will plague a few more and, for a short sum of time, the American consumer will be the only true winner.”