As iHeartMedia — parent of iHeartRadio, home to nearly 900 radio stations and a robust digital platform — tries to fend off bankruptcy, its troubles have trained a spotlight on the entire radio industry, which is struggling against competition from internet music services like Pandora and Spotify as well as burgeoning podcast networks.

Five years ago, fewer than 5 million Americans paid for a streaming-music service, but in 2016 that number jumped to 22.6 million, according to the RIAA. And Edison Research says that a year ago a threshold was crossed when adults ages 18-to-24 said for the first time that they spend more time listening to streaming music than they do traditional radio.

While incumbents like iHeartRadio, run by CEO Bob Pittman, and its chief rival Entercom Communications have embraced digital initiatives, so far Wall Street seems skeptical: Shares of iHeartMedia have fallen 21 percent since the company suggested April 21 that it might not survive another year unless it restructures its $20 billion debt. Entercom, which announced a merger with CBS Radio in February, has seen its stock price plunge 25 percent during the same time frame.

Brian Wieser of Pivotal Research says it’s not just changing audience tastes that are challenging the business models that built the two radio giants; he argues that because local businesses face fierce competition from nationwide chains like Walmart and e-commerce providers including Amazon.com, they aren’t purchasing as many radio ads as they used to. “When shoppers were geographically constrained, it was good for the radio business,” he says. It’s one reason why satellite service SiriusXM Radio, which relies far more on subscription fees than ad sales for its revenue, has fared better than iHeartMedia and Entercom, its shares dropping only 3 percent since April 21.

“Radio will still have a role for a while,” says Wieser. “It just won’t expand. There aren’t a lot of good examples of media in secular decline suddenly growing again.”

iHeart Radio Parent May Not Survive Another Year

Despite the negativity on Wall Street, the radio business overall is on a growth track, says PricewaterhouseCoopers, which predicts that sector revenue in the U.S. will rise from $21.8 billion in 2016 to $23.8 billion in 2020. Radio, in fact, remains the most popular medium in the U.S., with Nielsen estimating for the past several years that 91 percent of Americans older than 12 listen to an AM or FM station weekly.

And while Wall Street has been punishing the giants lately, there is at least one small, niche radio company that is thriving: Salem Media Group, which specializes in Christian and conservative talk and is benefiting from a contentious political scene around President Trump. Salem shares are up 11 percent this year.

Many of the problems plaguing iHeartMedia stem from a leveraged buyout in 2008, just before a market crash, which saddled the company with its massive debt (its latest deadline for restructuring its debt is May 26). This year, iHeartMedia’s interest expense alone will hit about $1.7 billion, with another $417 million in debt due, and the sum of those two could exceed its earnings in 2017. It also owns 90 percent of billboard company Clear Channel Outdoor, which recently reported a quarterly loss amid an 8 percent decline in sales.

But the situation is not all doom and gloom; iHeartMedia’s latest earnings report May 4 marked its 16th consecutive quarter of year-over-year revenue growth, including a 2.5 percent boost in U.S. ad sales. That’s better than Discovery Communications, Viacom, CBS and Pandora. 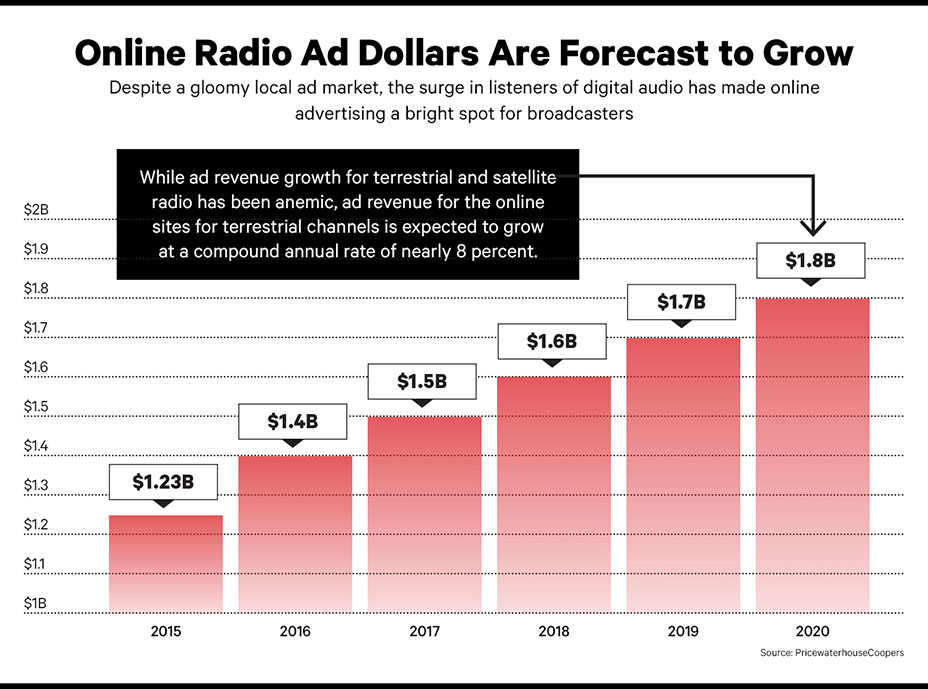 Consolidation also could help the fortunes of the radio industry. Pandora is for sale, and some investors are predicting that SiriusXM may want to purchase the digital-radio company, which sports a $2.2 billion market cap, 76.7 million listeners and 4.7 million paid subscribers.

And even if iHeartMedia is unsuccessful in its bid to restructure its debt, the company isn’t in danger of going away. It’s just a matter of who will end up owning it if a bankruptcy were to occur, says Jan Dawson, chief analyst at Jackdaw Research. The company is showing progress at reinventing its business for the digital era: It has launched two subscription on-demand services, iHeartRadio Plus and iHeartRadio All Access, as well as a new app targeting kids ages 4-to-11.

It also has created several live shows, including the iHeartRadio Music Festival, which is now in its sixth year.

“If you take away the debt,” says Dawson, “iHeartMedia is actually performing pretty well as a radio business; in fact, better than the rest of the industry because others haven’t evolved as well as iHeartRadio has, with its apps, digital initiatives and live events. Only radio companies that reinvent themselves will survive.”