In July, The Second City was facing an existential crisis. Its namesake improv theaters in Toronto, Los Angeles and Chicago had shuttered amid the COVID-19 pandemic, effectively eliminating all revenue overnight. Meanwhile, former members were taking to social media to call out the storied comedy brand — where Tina Fey, Eugene Levy, Steve Carell and Jordan Peele, among many others, got their starts — for institutionalized anti-Black bias. The controversy led longtime Second City CEO (and 50 percent owner) Andrew Alexander to resign, admitting that he “failed to create an anti-racist environment wherein artists of color might thrive.”

Eight months later, The Second City is hitting the refresh button. In December, the company installed Jon Carr, a veteran Black improv performer and playwright, as a senior executive. And Feb. 18, a private equity firm called ZMC — led by Strauss Zelnick, CEO of Take-Two Interactive (Grand Theft Auto) and former chairman of CBS Corp. — said it had purchased the legacy brand for an undisclosed sum. (The Financial Times put the price tag at about $50 million.)

A digital media mogul taking over a chain of live comedy cabarets? It’s not as unlikely a marriage as it might seem, Zelnick, 63, tells The Hollywood Reporter. “ZMC is in the business of investing in growth businesses that are taking advantage of what digital technology can do to benefit them and benefit their consumers,” he says, suggesting the migration online during the pandemic could point to a new path for profitability for live-comedy brands. “We actually thought it was kind of a natural fit, because we are attracted to story brands that captivate consumers — and that’s what The Second City has done for 60 years,” he says.

Second City is far from the only improv mecca that’s had to be quick on its feet through the tumult of the past year. The Groundlings (the Melrose Avenue school where Kristen Wiig and Annie Mumolo created characters like Barb and Star) and Upright Citizens Brigade (co-founded by Amy Poehler) have faced their own racial reckonings while scrambling to remain afloat due to pandemic closures. “The first shutdown was nerve-racking to say the least,” says Groundlings managing director Carrie Gergely. “We had to cancel dozens of classes and figure out refunds and credits and things.”

Early on, the theater company held emergency meetings to map out a game plan. “We figured teaching improv on Zoom would be a disaster. But we were pleasantly surprised that it could be quite delightful. Students had glowing reviews,” Gergely says.

For its annual Groundlings Holiday Show, the theater pulled out all the stops, putting on a live, Zoom-based performance featuring 120 video cues and 40 audio cues on top of the ridiculous wigs and costume changes fans have come to expect. The Melrose theater seats 99 — but the show had as many as 200 paying households per performance. “The audience lives in the chat room,” says Leonard Robinson, the director of the holiday show. “People will literally type ‘LOL.’ ”

Robinson is one of the three Black Groundlings — out of 26 main company members — and leads diversity panels at the theater. He says the online shows and classes have worked out so well, they’ll likely continue post-pandemic. “You used to have to be in L.A. to study at the school,” he says. “Now we have students in South Africa, Vancouver, Boston. It’s been a little bit of a blessing in disguise. I don’t want to paint a picture that everything is rosy. But I think we’ll be better off in the future because of it. It’s a moment to take a breath and account for a lot of what we want to accomplish, particularly in terms of diversity, equity and inclusion. Hopefully in six months, you’ll see audiences returning to what looks and feels like a new Groundlings.” 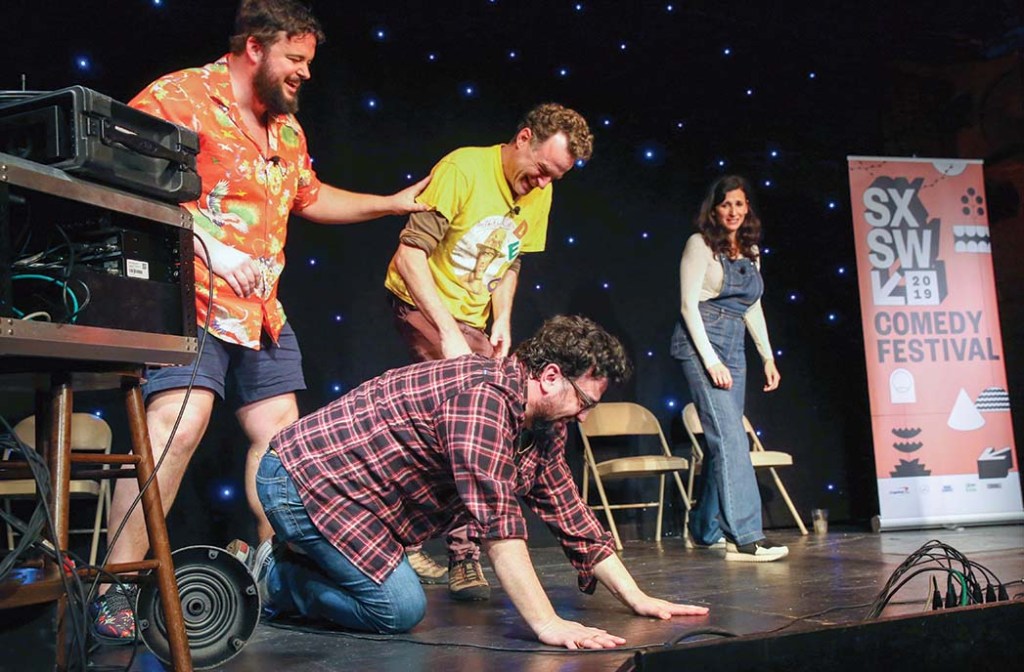 Hardest hit has been UCB, which because of the virus and over-expansion laid off staff in L.A. and New York and shuttered its East Coast facilities (a theater in New York’s Hell’s Kitchen and a training center in the Garment District) a year ago, then eight months later sold off its Sunset Boulevard headquarters, unable to make mortgage payments.

In June, amid the George Floyd protests and demands for racial equality, a group of former performers calling itself Project Rethink confronted UCB for “systemic racism.” Now the only physical UCB space that remains is a Franklin Avenue theater in Hollywood, but its future is uncertain. “While the UCB can’t speak for improv theaters in general,” the organization tells THR, it plans on “creating a nonprofit to which we will hand over control of the theater and school in Los Angeles.”

Adding to New York’s comedy woes, The Peoples Improv Theater (or the PIT), the second-biggest improv hub in the city after UCB and a place that has counted Ellie Kemper and Kristen Schaal as performers, said in a Feb. 19 Facebook post that it would vacate its 24th Street main stage. “The PIT was never just a space,” wrote Ali Reza Farahnakian, who founded the theater in 2002. “But tomorrow is promised to no one during a once-in-a-century global pandemic.”

Disneyland v. Gov. Newsom: When Will the Standoff Over Reopening End?