As the NFL’s players head back to the field for the 2017 season, so, too, do the cheerleaders — who also are heading to court. In recent years, at least five NFL teams — the Oakland Raiders, Tampa Bay Buccaneers, Cincinnati Bengals, Buffalo Bills and New York Jets — have faced lawsuits from their cheerleaders over pay.

Kelsey K., one of the plaintiffs in a class-action lawsuit against the NFL and its member teams, trained for two decades as a dancer before beating out dozens of other women for one of a handful of spots on the San Francisco 49ers‘ Gold Rush Girls. Yet, in spite of her demonstrated skills and being told by the team that she was an integral part of the game-day experience, K., who was on the squad from July 2013 to February 2014, received a wage of just $125 per game, or $1,250 per season. Doing the math, for the 450 hours she worked, that comes out to $2.75 per hour, well below federal minimum wage. As part of her terms of employment, K. was not permitted to talk about pay with other NFL squads.

“They’re told, ‘A million girls want your job.’ Their treatment is shocking,” says Drexel A. Bradshaw, the lawyer representing the cheerleaders in the suit. NFL players earn $1.3 million on average, according to court documents. Team mascots are paid between $25,000 and $65,000 per season, and some even receive retirement benefits.

Bob Lange, a spokesman for the 49ers, says the team contracts with an outside company, Gold Rush, for its cheerleaders. That company did not respond to a request for comment.

K.’s case in California’s Northern District goes a step further than previous lawsuits in that it alleges the league and its teams are engaged in an “overarching conspiracy” to restrict cheerleader wages, according to court documents. The “no poaching” policy, adopted by the NFL as part of their merger with the American Football League, or AFL, in 1970, prevents cheerleaders from seeking out higher wages with other teams, which, lawyers for cheerleaders say, is a violation of federal antitrust laws. 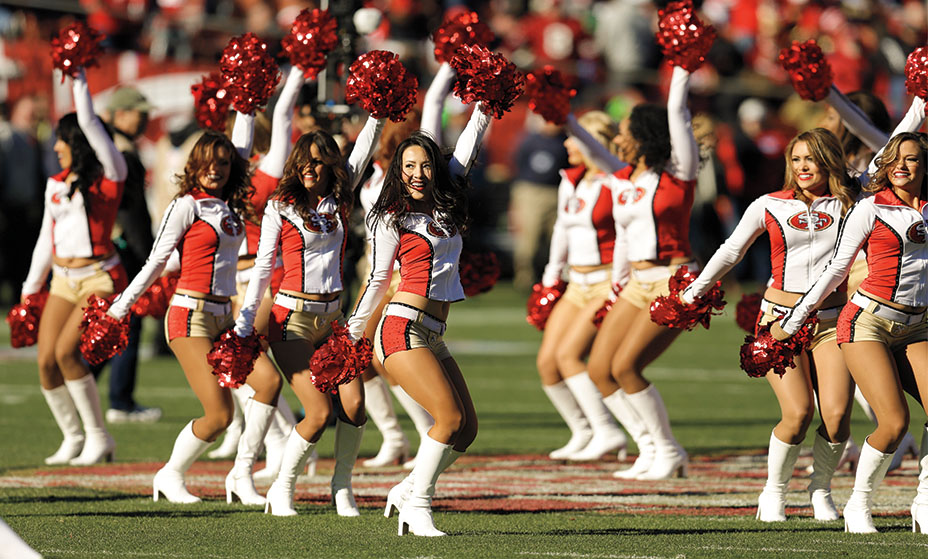 Brian McCarthy, a league spokesman, points to a judge’s motion to deny the complaint on July 21, which said that the lead cheerleader in the case “still fails to plead factual allegations supporting any plausible claim for relief.” Bradshaw said he intends to appeal the ruling.

The cheerleader suits are beginning to get results. In May, 100 Oakland Raiderettes received a $1.25 million settlement after filing suit alleging the Raiders failed to pay the squad fairly. And in 2015, members of the Cincinnati Ben-Gals won a settlement of $255,000 over back pay. A Bengals spokesperson did not respond to a request for comment.

Laws concerning wages vary by state, particularly how far back claims can stretch and whether wronged employees can gather penalties and interests, in addition to back wages. Sharon Vinick, the lawyer who represented the Raiderettes in their case, says even since the news of their win, stigma about speaking out remains.

“It’s still really frightening for cheerleaders to come forward,” says Vinick. “They take a lot of heat for it.”

And it’s not just the NFL cheerleaders who are coming forward. Since leaving the Golden State Warriors dance team, Lisa Murray has been advocating for cheerleader pay and trying to organize a union. “When I was on the team, I didn’t really know that much about employment law and our rights,” she said. “This is basically a full-time job, but they pitch it as a hobby. They pitch friendship over financial importance. It’s a structure that prevents women from advancing. I was there to do my job, to dance.”

Meanwhile, the discrepancy between the NFL’s estimated profits — $13.3 billion in 2016, according to Forbes, up from $8.5 billion in 2010 — and the paltry pay for cheerleaders is attracting interest from lawmakers in California and New York to close the cheer pay gap.

“All of those settlements prove the point further that there are workplace infractions and they should be treated like employees,” says Nily Rozic, a New York State assemblywoman who is co-sponsoring legislation that would mimic the law passed in 2015 by California that applies existing labor laws to cheerleaders in the NFL, NBA and NHL.

“It’s completely gendered,” says Rozic. “If they were male athletes, I believe they would be treated more like real athletes.”

The lawsuits underscore larger issues, says Christian A. Jenkins, an attorney for the cheerleaders. The cases have revealed that NFL cheerleaders can be subject to fines for things like not having their nails done properly, must engage in draconian weigh-ins or can be required to not wear underwear at games. “It’s degrading,” says Jenkins. “It is antiquated how they think of these women.” She adds: “Oh, and they referred to them as girls. They’re not. They’re grown women.”