Since Netflix took its streaming video service truly global in 2016, the company has pretty much had the market to itself. But things are about to get very crowded, very fast. While Disney and Apple roll out their own services — with WarnerMedia and NBCUniversal hot on their heels — scores of local players, in Spain and Singapore, Britain and Berlin, are pushing into the SVOD market, looking to occupy at least a portion of Netflix-controlled territory.

RTL Group, Europe’s largest commercial broadcasting company, announced in March that it will invest close to $400 million the next three years in building up its video-on-demand services across the continent. The bulk, some $340 million, is budgeted for content production and acquisition. The BBC and Britain’s leading commercial network, ITV, have unveiled plans to join forces to launch BritBox, an on-demand service that will offer homegrown series such as the BBC’s McMafia and ITV’s Broadchurch and Inspector Morse to local subscribers. In France, Vivendi has unveiled the low-cost subscription service Canal+Series, which for about 7 euros a month ($8) will stream CanalPlus programs including Versailles and Guyana alongside imported fare from the likes of Showtime (Billions, SMILF), FX (The Americans, Sons of Anarchy) and BBC America (Killing Eve). France’s free-to-air broadcasters TF1 and M6 have announced their own would-be Netflix killer, called Salto, which is expected to debut this year. Rakuten, a Japanese-owned on-demand service that also offers online shopping similar to Amazon, is particularly strong in Spain, where it has 2.5 million subscribers. The company just tripled its distribution in Europe with a launch across 30 new territories in March.

In Asia, India’s Hotstar, iFlix from Malaysia, Singapore-based Hooq and a string of Chinese giants — iQiyi, Tencent, Youku — are battling with Netflix for the attention, as well as the dollars, rupees and yen, of local subscribers.

“It’s a replay of Game of Thrones, a fight for a global SVOD empire,” says Claire Enders of U.K.-based Enders Analysis. None of the new Netflix competitors has dragons or white walkers to bring to the battle, but what’s at stake is no fantasy. The European SVOD market was worth $6 billion in 2018, according to a recent study by Kagan Research. Kagan is forecasting that the European market will be worth nearly $7 billion by 2022, with more than 60 million SVOD subscribers, up from 45 million in 2018. Brit-based analysts Digital TV Research forecast that the Asia Pacific SVOD market will triple in the next four years to $15 billion by 2023.

For now, Netflix has the bulk of that business to itself. Kagan estimates that currently, just five services account for 89 percent of Europe’s SVOD business, with more than half (52 percent) going to Netflix alone (Amazon is second with 21 percent, while Europe’s Comcast-controlled Sky is a distant third with 4 percent). It’s a different story in Asia, where Netflix’s high-end service has had trouble making inroads in low-cost territories like India and Indonesia, and it’s barred from China, the region’s biggest market.

But Netflix, now with 139 million subscribers and only 58 million of them in the U.S., has made it clear that its future is global. “Eighty percent of our new-member acquisitions come from outside the USA, so we’re focused on providing content for all the 190 countries we serve,” Netflix vp original content Cindy Holland said March 11 at the INTV conference in Jerusalem. “They are essential to the lifeblood of our company.”

Compare that with the paltry sums ITV has set aside for BritBox — the market-listed broadcaster said it will spend $33 million on the new service this year and $53 million in 2020.

“Twenty-five million pounds [$33 million] — that’s three episodes of The Crown,” Tom Harrington, an Enders Analysis senior researcher, said in a recent interview with the BBC, referring to one of Netflix’s biggest international successes.

Unable to match Netflix dollar for dollar, the new regional SVOD players are trying to offer something different. Most are betting they can compete with a strong focus on local programming.

RTL, Moviestar in Spain, Viaplay in Scandinavia and Hooq in Southeast Asia are pushing local-language series as a way of distinguishing themselves from the likes of Netflix, Disney+, Apple and future studio-led SVODs.

RTL already has 1 million SVOD subscribers for its online services in Germany and the Netherlands and aims to triple that figure across Europe the next three years. “Our clear objective is to become No. 1 in local streaming in the key television markets in which we operate,” Rabe says.

Big free-to-air broadcasters — ITV and the BBC, France’s TF1 and M6, Germany’s RTL and ProSiebenSat.1 (which recently launched a joint SVOD service with Discovery for the German market) — also think they can leverage their traditional TV audiences to grow their new online offerings. CBS All Access followed a similar strategy in Australia — its first territory outside of North America — by using the local, CBS-owned, Aussie channel Network 10 as a platform to market and promote its new SVOD service, whose on-demand offerings include The Good Fight, NCIS, The Big Bang Theory and Young Sheldon.

Most overseas competitors also are combining subscription services — usually priced just below Netflix in the respective territory — with ad-supported digital platforms. International broadcasters are betting they can still offer broad-appeal programming that will deliver mass audiences to potential advertisers.

“Netflix and Amazon are never going to be able to generate 10 million simultaneous viewers, like [recent BBC series] Bodyguard did,” claims Enders. “Broadcasters have always been the masters of the multitudes, and advertisers want that mass-market reach … TV advertising is in fundamental decline, but at the mass market end, the broadcasters are still ace at delivering real numbers for advertisers.”

“You don’t have to be Netflix to succeed,” adds Armando Nuñez, the L.A.-based president and CEO of CBS Global Distribution Group. “It depends on what your model looks like and what your P&L [profit and loss] ambitions are. You can have a very successful model without having the need to have huge subscriber goals.”

Given Netflix’s dominance, for the majority of international players, not going head-to-head with Reed Hastings’ 800-pound gorilla might be the most sensible option. France’s CanalPlus learned that the hard way. Its ambitious CanalPlay streaming service collapsed in 2018 after being eviscerated by Netflix. According to figures from France’s National Cinema Centre, Netflix now controls 70 percent of the country’s SVOD market.

So when CanalPlus CEO Maxime Saada in March unveiled the company’s new streaming service, Canal+Series, he was clear that he was not coming to beat Netflix but to join them.

“We do not compare Canal+Series to Netflix,” Saada tells THR. “In fact, we feel Netflix is actually fighting in our corner by developing our pay TV market and encouraging people to pay for content.”

At the Jerusalem conference, Netflix’s Holland echoed this conciliatory tone. The global SVOD business, she said, isn’t “a zero-sum game” where new entrants will cannibalize existing Netflix subscribers. “There’s a lot of opportunity for all the big entertainment companies that have existed for quite some time as well as the new entrants. On-demand TV is truly in its early stages, and there’s room for many companies to be successful.”

World War Netflix: 6 Battlegrounds to (Binge) Watch
From Berlin to Beijing, these services are attempting to give the streamer a run for its money 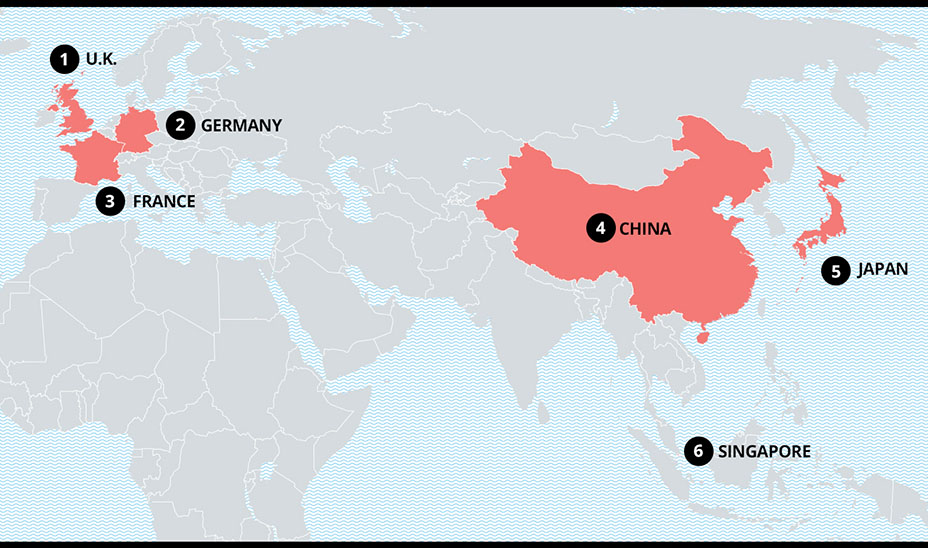 1. BritBox
In 2008, the BBC, ITV and Channel 4 joined forces on an all-Brit SVOD service called Project Kangaroo that was blocked by regulators. Now ITV and the BBC are taking a second swing with this service, set to launch this year, which will focus on U.K. series. But ambitions are modest: ITV will invest just $86 million in BritBox during the next two years.

2. TV Now
European?broadcasting giant RTL Group has committed to spending some $400 million on VOD programming in the next three years for this pan-European service, with much of the content coming from production subsidiary Fremantle, producer of American Gods and Deutschland 86.

3. Canal+Series
Less than a year after folding its CanalPlay subscription VOD service, CanalPlus is launching its latest Netflix rival, which will offer exclusive CanalPlus series such as Versailles and Guyana as well as hand-picked international shows including BBC America’s Killing Eve, Showtime’s Billions and Sky Italia’s Gomorra.

4. IQIYI
The Chinese online giant added 36.6 million new subscribers this year and — helped by the Chinese government’s ban on Netflix — is on track to top the 120 million mark by the end of 2019.

5. Rakuten TV
The Japanese service more than tripled its distribution in Europe in March, launching in more than 30 new territories, including the Nordics and large parts of Central and Eastern Europe. While Rakuten’s ambition is to be a “true global alternative” to Netflix and Amazon, the service is focused on pay-per-view rather than subscription-based video-on-demand.

6. HOOQ
Backed by Sony Pictures TV, WarnerMedia and Singaporean telecom Singtel, Hooq is Netflix’s?strongest competitor in Southeast Asia and claims to be beating the streaming giant in Indonesia.

Rhonda Richford in Paris contributed to this report.