Call it soft distancing. In the wake of an April 7 Hollywood Reporter exposé on Scott Rudin’s abusive behavior, a number of industry organizations and Rudin himself have begun to address the matter, albeit in vague and toothless ways.

On April 17, Rudin announced that he is stepping back from “active participation” in his upcoming Broadway projects, but he gave no indication of what that actually means and which plays will be affected. Three days later, he released a second statement saying he is stepping away from film and streaming projects as well.

But to date, no industry player or partner with upcoming Rudin business has spoken out, and most of the industry is keeping mum in the face of on-the-record allegations that included physical violence. Rudin remains a client at WME, an agency that swiftly cut ties with other clients accused of misconduct, including Armie Hammer and Brett Ratner. But a WME source was quick to point out that Rudin is a client in a limited capacity, for television only.

The lack of action has some prominent industryites feeling frustrated and skeptical. On April 12, Walking Dead producer Gale Anne Hurd contacted the Producers Guild and urged leadership to take a stand on Rudin. So far, the PGA has said nothing, nor has the Academy, which counts Rudin as a member. “Scott Rudin’s behavior toward his staff is not only an open secret, but one that has been tolerated for far too long,” Hurd tells THR. “Given the deafening silence from the industry to these recent accusations, it appears that nothing is likely to change. It’s heartbreaking that none of the film/TV studios, networks or unions has come out with a statement in support of victims of his alleged criminally abusive behavior.”

In THR’s April 7 cover story, several of Rudin’s ex-staffers chronicled his acts of intimidation, which included throwing items at underlings in the New York office such as a glass bowl, a baked potato, a teacup and a stapler. At least two staffers wound up in the hospital — one from stress, another as a result of Rudin allegedly smashing a computer monitor on a young man’s hand.

A24 has the strongest ties with Rudin, the producer responsible for many of the New York-based distributor’s most buzzy and profitable films, among them Lady Bird, Ex Machina and Uncut Gems. But it has yet to comment on its ongoing relationship with him. An A24 source tells THR that Rudin is no longer involved with Jennifer Lawrence’s Red, White and Water and Joel Coen’s The Tragedy of Macbeth, starring Denzel Washington and Frances McDormand. But it is unclear whether that is because the films already are in postproduction. Further muddying the waters, billionaire mogul Barry Diller, a close friend of Rudin’s, has a stake in A24 and is a backer of Scott Rudin Prods., according to sources. 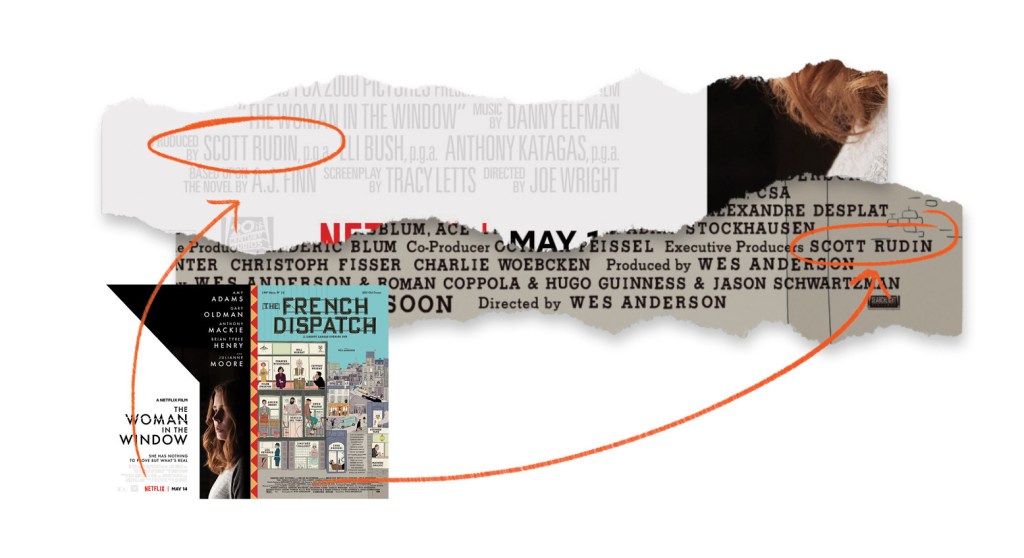 If Rudin is one of the film industry’s most powerful producers of the past 25 years, he is a titan on Broadway. He and Jane Rosenthal were tapped by New York Gov. Andrew Cuomo to head Broadway’s recent Pop Up performances, a partnership with the New York State Council on the Arts and Empire State Development. Rudin’s name was touted on press releases for the program as recently as April 19. Rosenthal declined to comment, as did the governor’s office. Rudin was expected to run the program through Labor Day and was the key player in marshaling talent.

But outside of Tony winner Karen Olivo, who announced that she would step down from her starring role in Moulin Rouge! — not a Rudin production — in protest of the community’s apathy toward the Rudin accusations, the key decision-makers have stayed out of the fray. A source tells THR that Music Man star Sutton Foster vowed to quit the upcoming production, seen as one of the most anticipated plays that will mark Broadway’s return to business after a devastating COVID-19 shutdown, if Rudin didn’t step aside. But the play’s Hugh Jackman made no such ultimatum, another source says.

For her part, Olivo isn’t holding her breath that real change is sweeping Broadway and upending a status quo “that favors profits over people.”

“This is wonderful news if Rudin is, in fact, stepping away from [Music Man] and severing all ties and not becoming a co-producer/silent investor,” Olivo says. “I’d love for us to put the emphasis on repairing harm to the victims, centering their experience rather than spin where Rudin does Broadway a favor by stepping away.”

On Wednesday, Jackman issued a statement about the Music Man: “I want to say how much I respect and applaud the people that have spoken up about their experience working with Scott Rudin. It takes an enormous amount of courage and strength to stand up and state your truth. This has started a conversation that is long overdue, not just on Broadway, and the entertainment industry, but across all workforce. The most important voice we needed to hear from was Scott Rudin, he has now spoken up and stepped away from the Music Man. I hope and pray this is a journey of healing for all the victims and the community. We are currently rebuilding the Music Man team and are aspiring to create an environment that is not only safe, but ensures that everyone is seen, heard and valued. This is something that is and has always been very important to me.”

In the meantime, some of those who suffered as a result of Rudin’s abusive behavior are speaking out. David Graham-Caso posted an emotional video message on Twitter in which he spoke directly to Rudin. The video detailed alleged abuses that his identical twin brother, Kevin Graham-Caso, endured at the hands of Rudin. Kevin worked for Rudin in 2008 and 2009 and was “berated and demeaned, bullied and intimidated and harassed,” according to his brother, and developed a severe anxiety disorder as a result. Kevin took his own life in October.

Rudin’s statement that he’s “profoundly sorry for the pain my behavior caused to individuals” has not impressed his surviving brother. “The pain and suffering Scott Rudin caused won’t be healed by his doubling down on an empty public relations stunt, cynically designed to avoid real consequences,” David Graham-Caso tells THR. “The power to actually change things, to save future assistants from a similar fate as Kevin’s, rests with the people who have enabled Rudin’s abuse for so long. If the actors, writers and directors who have partnered with Rudin in the past stand up to this bully, they have the power to save lives.”