Despite attractive tax incentives in other states and changing consumer behaviors, the film and digital media workforce in Los Angeles County is growing faster than in the New York metro area and is becoming increasingly more diverse, a new study has found.

That study, commissioned by the Los Angeles County Chief Executive Office, surveys film and digital media industries as an integrated “cluster” (acronym: FDMI). As streaming and digital video blur the lines between film and television and digital media, the authors argue, the two sectors are increasingly collaborating and integrating. Undertaken by the independent research and consulting firm Beacon Economics, the report provides a generally positive overview of L.A.’s role in the shifting media landscape. (Read the full study here.) Still, its authors also single out housing affordability and cost of living as remaining issues for the industry, and provide policy recommendations to strengthen its position.

A central finding of the study is that L.A. county’s FDMI employment is growing faster than the nationwide average and New York City’s, with jobs increasing by 23 percent between 2011 and 2016. (In New York employment grew by 12 percent, while that of the nation grew by 15 percent.) Today, direct FDMI jobs and jobs created by the industry account for 17 percent of L.A. County’s total workforce, while the business has a $158.3 billion economic impact on the county. 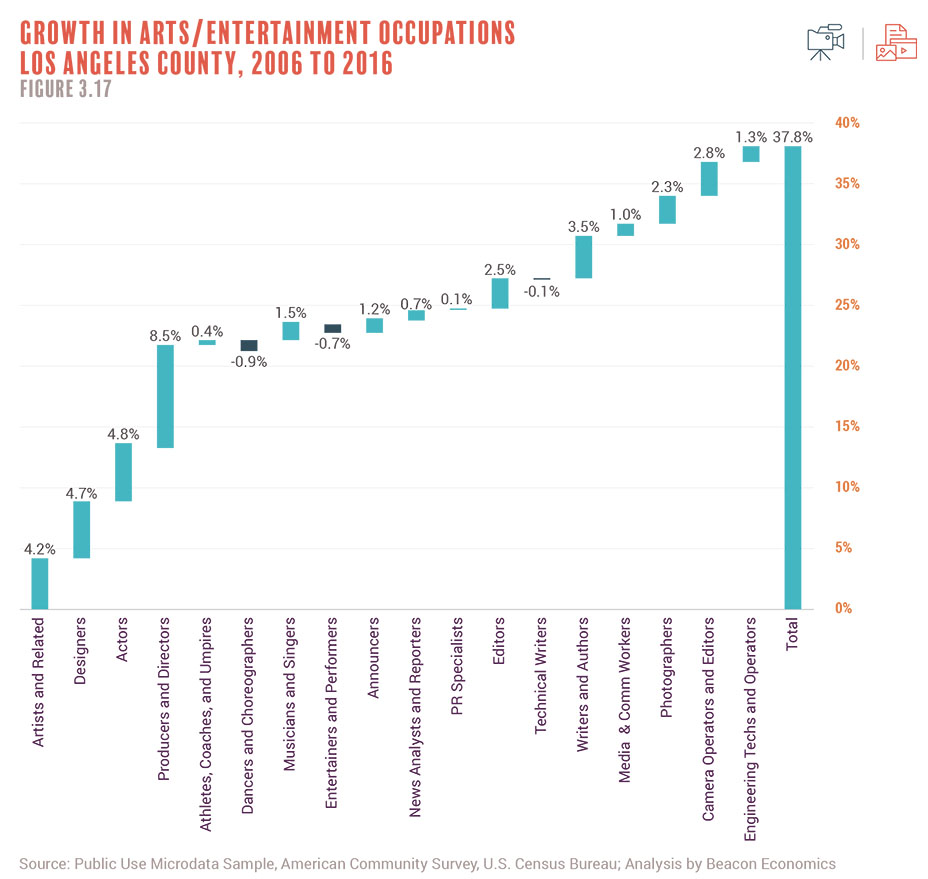 Also surveyed was the changing demographics of the industry: Though non-Hispanic white employees still dominate film and digital media, comprising 56.8 percent of the workforce, the employment of racial minorities is growing at a faster rate than that of their white colleagues. Between 2006 and 2016, the number of Hispanic employees grew by 37 percent, that of Black and Asian employees grew by 26 and 61 percent, respectively, and other racial groups grew by 74 percent. That’s compared to a 24 percent rate of growth for non-Hispanic white workers.

When broken down by gender, however, the change in the workforce was not as impressive. In L.A. County, the gender ratio was “virtually unchanged”: For every 100 men in the workforce, there were 60 women. (In New York City, by contrast, the study found 75 female workers for every 100 male workers.) Though women’s wages were found to be rising faster than men’s in the industry over 10 years’ time, women still earned 80 cents on every dollar their male colleagues made in L.A. County.

The study did not survey the demographics of particular positions in the industry, as others have. 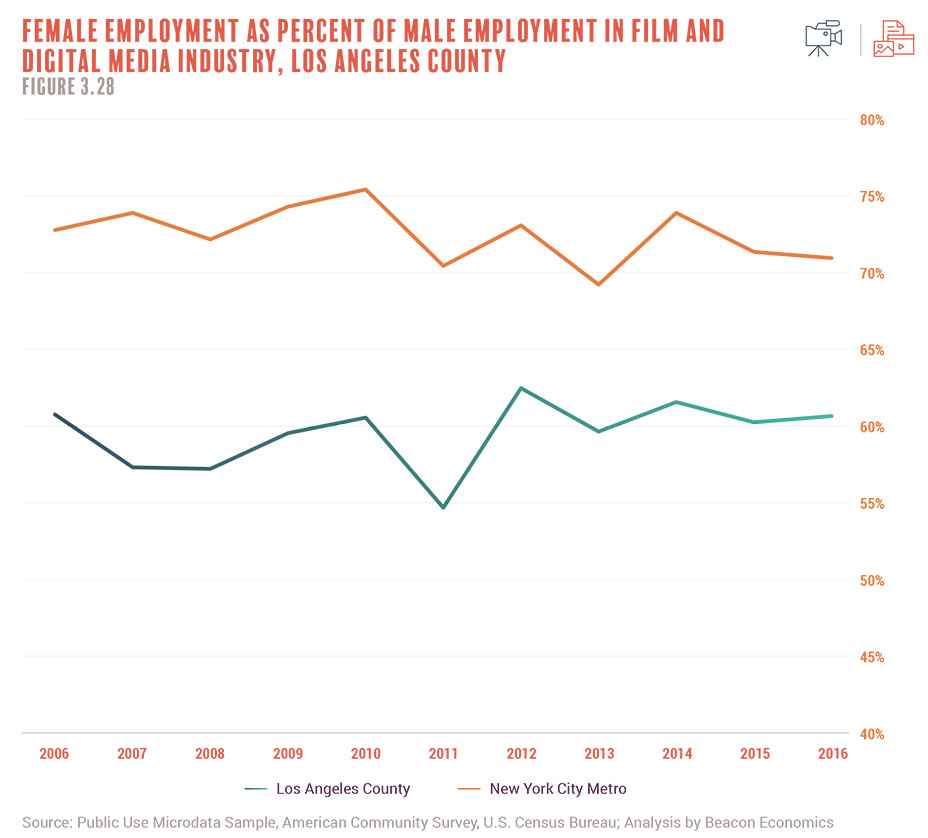 Another documented change in L.A.’s FDMI workforce was education level attained by workers. The number of employees who have a bachelor’s degree has risen by 60 percent over 10 years, while that of those with a graduate or professional degree rose by 47 percent. Meanwhile, the number of employees with less than a high school education fell 36 percent, and that of those with just a high school education dropped 5 percent.

Alysa Hannon, manager of Beacon Economics’ Sustainable Growth and Development Practice, concluded, “The emergence of digital media has helped to strengthen, not weaken, Los Angeles County’s position in the film sector, as it acts as an input to the demand for digital video content.” She added, “The metamorphosis occurring across digital media seems to create a new need for high-quality, digital video content on a daily basis and that’s what L.A. does, that film production happens here.”

Still, the study’s authors point out changes that need to be made to sustain L.A. County’s FDMI growth. The county needs more soundstages to keep production local, they argue, and the County needs to help with reducing cost of living in the county and improving housing affordability.

“California’s industries, and their ability to hire and retain middle-income workers, are broadly threatened by how exceedingly expensive it is to live here — the film and digital media industry is no exception,” Adam Fowler, Beacon Economics’ director of research, said.

Study Finds No Significant Improvement in Film Inclusion Over Past Decade