It’s a boom time for real estate brokers. Next to developers, no other industry has benefited more directly from Southern California’s red-hot market. And for Los Angeles’ top firms, the past 12 months have been a head-spinning time of record-breaking profits. In fact, pick nearly any well-known Hollywood-serving brokerage and you’ll find the trappings of explosive growth, whether that’s an expansion into new markets (The Agency taking on Malibu), a newly opened state-of-the-art headquarters (Hilton & Hyland’s on Canon Drive) or a $2.2 billion evaluation (Compass).

Not only are the top-performing agents becoming extremely wealthy, but a select few have become entertainment fixtures in their own right (Bravo’s Million Dollar Listing, which stars Rodeo Realty’s Josh Flagg and Douglas Elliman’s Tracy Tutor Maltas, among others, just entered its 10th season). Adding to the backslapping cheer is the fact that less than a decade ago, many observers were predicting — some quite gleefully — that it was just a matter of time before disrupters like Redfin and Zillow would render brokers obsolete. Instead, the number of licensed real estate agents in California climbed by more than 13 thousand in the last three years.

Of course, where there is opportunity, there is greed, and with greed comes fraud — or at least its potential.

Last summer, THR assembled a research team to scour the archives of 17 local courthouses with a simple goal: determine how much legal activity has been directed at the brokerage industry in L.A. since the area’s housing boom started eight years ago. What the investigation found was concerning: 321 fraud-related civil lawsuits filed against some of the industry giants as well as boutique agencies. Several real estate attorneys contacted say that while the amount of cases is alarming, it may actually underrepresent fraud in the marketplace, as consumers usually are deterred from bringing legal action against a broker because of the fact that most disputes must be settled in arbitration (which historically has benefited the corporation).

THR‘s findings dovetail with two other major events unfolding in February that may impact the way real estate brokers and agents function. In courthouses across Southern California and in the corridors of Congress, new light is being cast on the seedier side of the industry. The concern is that the current real estate boom is exacerbating long-simmering problems and leading to an uptick in unethical behavior, not least of which is the ability for agents to play both sides of a deal.

In January, Million Dollar Listing stars Josh and Matt Altman, along with their former real estate firm Hilton & Hyland, were sued for $3.7 million for allegedly providing the seller — the plaintiff — with bad advice because Hilton & Hyland also represented the buyer, a practice known as dual agency. In a statement provided to THR, Matt Altman says: “When you’re at the top of the real estate game, you’re a target for frivolous lawsuits. We repped the buyer, not the seller who had his own agent. Everything was approved by the bankruptcy court.”

Dual agency allows one brokerage to represent both the buyer and the seller, thus doubling their commission (6 percent is the industry standard, split between the seller’s agent and the buyer’s). It is a controversial yet currently legal practice that many see as inherently flawed because it requires one brokerage to weigh the interests of two parties simultaneously.

On Feb. 26, jurors in an L.A. Superior courtroom will hear opening arguments in Horiike v. Coldwell Banker. The case centers on Hong Kong businessman Hiroshi Horiike’s 2007 purchase of a Malibu mansion and the discrepancies at which the property’s size was listed. But at the heart of the trial is dual agency: The question facing the jury is what fiduciary duty did Coldwell Banker agent Chris Cortazzo — a perennial top broker who counts Barry Diller, Ellen DeGeneres and Ron Meyer as clients — owe to both Horiike and the home’s seller. 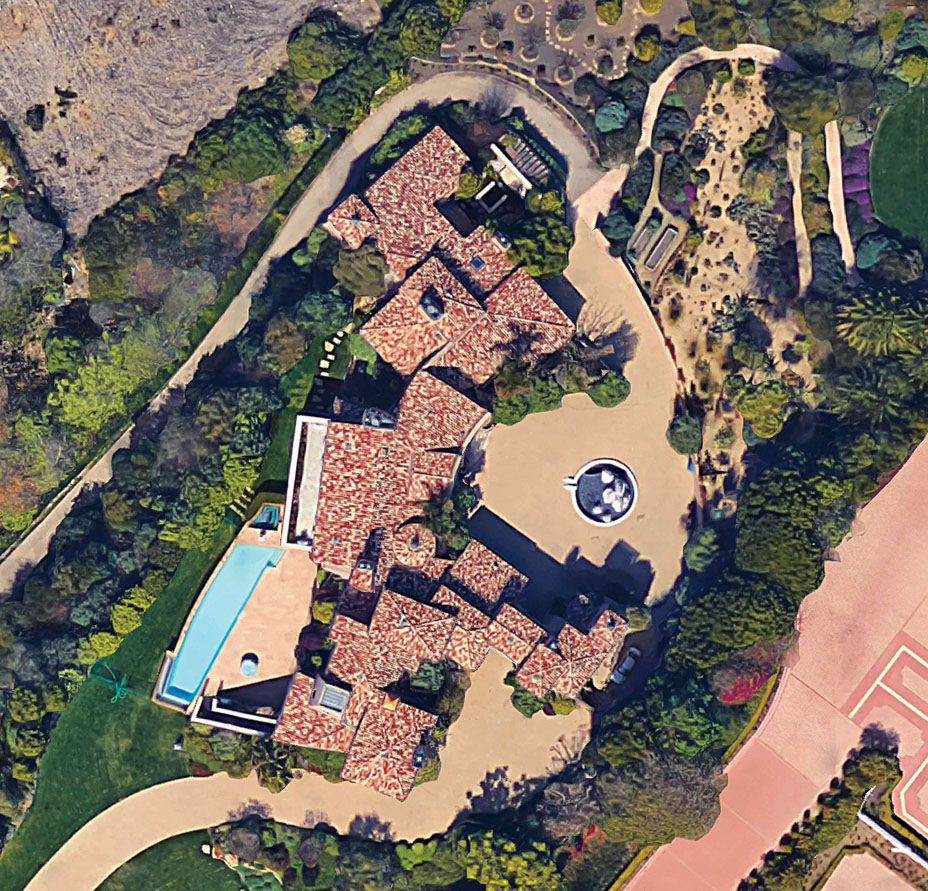 Last year, the California Supreme Court ruled on the Horiike case and determined that a real estate brokerage representing both the buyer and seller in a deal owes the same responsibilities to each party. The ruling, which was considered quite narrow, kicked the case down to a lower court. The late-February trial will either vindicate or punish Coldwell Banker and Cortazzo and will determine whether Horiike’s fiduciary responsibility was in fact breached (Horiike is seeking damages of $7.5 million) and will establish a major legal precedent on dual agency.

Many thought that simply the legal scrutiny placed on dual agency by the Horiike case and others would discourage the practice, but little has changed. In the 12 months before the California Supreme Court’s Horiike ruling, 25 percent of transactions on the Westside of L.A. had the same brokerage representing the buyer and seller. In the 12 months after the ruling, that percentage was exactly the same, according to Multiple Listing Service (MLS) data provided by Nourmand & Associates, a Beverly Hills-based luxury brokerage.

What seems clear is that the practice is not going away unless the state legislature gets involved. “The real estate industry is never going to embrace doing away with dual agency,” says Lawrence Jacobson, a Beverly Hills-based attorney who was a former head of the Beverly Hills Bar Association and an expert witness in more than 120 real estate-related trials (including the Horiike Supreme Court trial).

In other words, buyer (and seller) should beware. Clients who are wary of dual agency have the power to stipulate before formally entering into an agreement that a broker cannot represent the other side in a transaction. But that language has to be clearly spelled out in the contracts.

The most prevalent charges found within the hundreds of lawsuits analyzed by THR were breach of contract, negligent misrepresentation, conspiracy to defraud and breach of fiduciary duty.

Agents interviewed for this story admit there is plenty of opportunity for sketchy activity, though many argue that most of that occurs at the lower end of the marketplace. “If you look at the rare situations where agents take advantage of clients, it seems to happen more often in unsophisticated markets,” says Michael Nourmand, president of Nourmand & Associates. “Clients in more affluent neighborhoods tend to be highly educated and have advisers by their side to protect their interests.”

Further exacerbating the potential lack of regulatory oversight is the fact that in recent years, the state agency tasked with moni­toring fraudulent activity was the victim of cost-cutting measures in Sacramento. California used to have its own stand-alone Department of Real Estate that issued and monitored licenses and was the enforcement agency for brokers and agents. But in 2013, the state’s real estate department was absorbed into the larger California Department of Consumer Affairs. The bureau currently has 330 civil servant positions to monitor and oversee 415,000 current licenses. (The state legislature recently reversed that decision. As of July 1, a stand-alone department focused on real estate will be back up and running.)

The THR research team also found various instances of flopping in the data. Flopping is the opposite of “flipping” and occurs when an agent — usually working with another party who is acting as potential buyer — manipulates a client to sell a property for less than the fair-market value. The property is then later sold for its true market value, with the broker taking a piece of the profits. 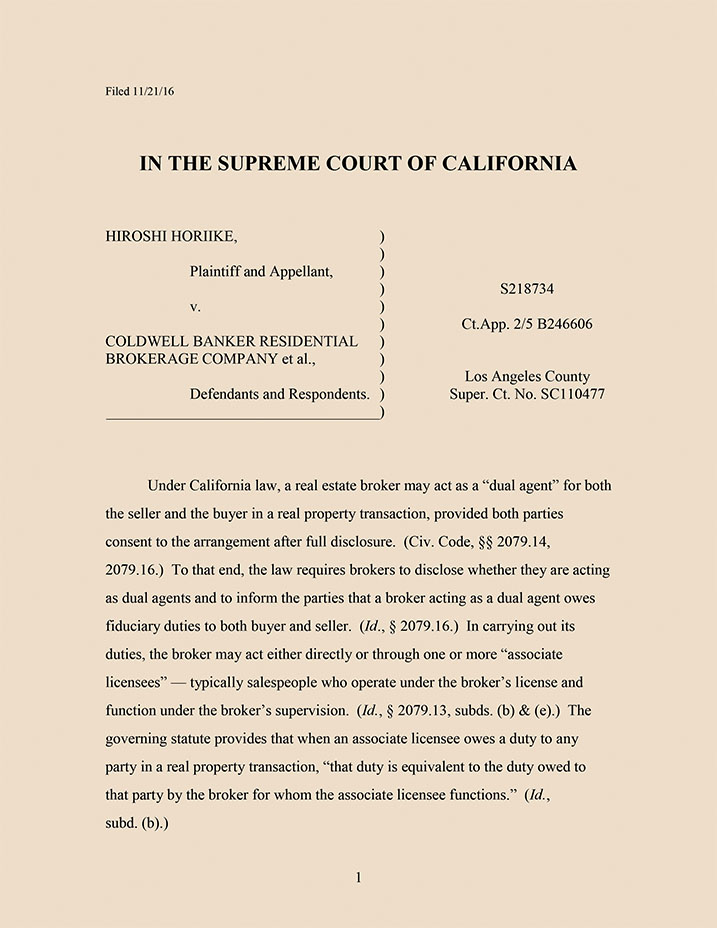 Some see these problems within the industry as a function of a lax licensing process for agents. California has a tiered system. Agents are licensed salespersons, but they are not real estate brokers, and they must work for an employing broker. “The reality of the situation is that it’s not hard to get a agent’s license, and they don’t get a ton of training,” says Zachary Schorr, an L.A.-based real estate attorney who is representing Horiike in the upcoming trial. “In California, we are talking about huge transactions, some of the biggest transactions in someone’s life — whether it’s $1 million or $12 million — and clients are doing it with someone who is not a lawyer,” says Schorr.

Real estate attorney Guy Puccio, who has consulted for the California Bureau of Real Estate, says the problem lies in the definition of what constitutes a “broker” versus an “agent.” Agents and brokers are both licensed by the state, but a broker’s license is far more rigorous and requires applicants to complete extra coursework in a wider range of topics like ethics, contracts, taxes and insurance.

“The training for [agents] is inadequate,” says Puccio. “There isn’t a two-tiered license for CPAs, lawyers, architects or engineers.”

Experts say that when consumers encounter any sneaking suspicion about a large real estate transaction, they should consult a real estate attorney who can help backstop — or safeguard against — their broker and agent.

Brokers never have been accused of being overly generous when it comes to sharing information; insider information provides a major competitive advantage.

But back in 2008, the U.S. Department of Justice slapped the brokerage industry with a 10-year consent decree that subjected the industry to intense scrutiny of how brokers and agents share information with online technology firms like Zillow and Redfin. In November, that consent decree expires.

“The obvious worry is that the industry will go back to engaging in the same kind of conduct (of withholding information),” says David Kully, a partner at the law firm Holland & Knight who was an attorney with the anti-trust division of the DOJ and tasked with enforcing the consent decree.

As a result, Reps. Tom Marino and David Cicilline are asking the DOJ to reopen its transparency investigation. “An up-to-date report on competition in the brokerage industry would be especially timely now given the pending expiration of this 2008 consent decree,” read their letter, a copy of which was obtained by THR. According to recent news reports, the DOJ and the Federal Trade Commission are set to hold a workshop on real estate competition later this year, suggesting that they are taking the concern seriously.

Off-market listings, also known as “pocket listings,” are another gray area when it comes to transparency. Pocket listings have the allure of exclusivity, and for certain clients — stars, public figures or high-net-worth individuals who value privacy above all else — this can be advantageous (Miley Cyrus recently sold her Hidden Hills estate off-market for $5 million). For nearly everyone else, though, pocket listings should be approached with caution, according to most experts who say that the broadest marketing exposure for sellers and greatest trans­parency for both parties comes from using the MLS.

There are several ways to test a potential agent’s honesty. Zillow offers broker reviews on its site. One also can ask an agent whether they share all their listing information with the MLS. Another trick is to fact-check across the listing portals to confirm that there are no discrepancies in listing information. Additionally, most county websites offer much of the relevant information to confirm consistency.

The irony is that the real estate industry is highly regulated. There are dozens of statutes in California that lay out in detail where the law begins and where it ends when it comes to real estate transactions. But as Jacobson points out, “It is easy to allege that a real estate agent screwed up, but it’s much more difficult to prove it.”