None of the behind-the-scenes legal conflict surrounding the infamous “monkey selfie” case was discussed during a 9th Circuit hearing Wednesday — but that doesn’t mean it wasn’t entertaining for those watching the live stream or in the San Francisco courtroom.

PETA is appealing a California federal court’s ruling that an Indonesian monkey named Naruto lacked standing to sue for copyright infringement a photographer who published a “selfie” of him. Circuit Judges Carlos Bea and N. Randy Smith hammered PETA’s outside counsel David Schwarz with questions, barely giving the attorney an opportunity to argue his case.

Bea led off by questioning whether PETA has a sufficient relationship with Naruto to serve as his “next friend” and bring this suit on his behalf. Prior to the appeal, primatologist Antje Engelhardt, who worked with Naruto and his fellow crested macaques for years, served that role. Now, she isn’t involved in the case and the 9th Circuit questions whether PETA’s general interest in the well-being of animals is sufficient to qualify it as his next friend.

“Why shouldn’t we vacate this decision, remand it to the District Court with instructions to enter a dismissal with prejudice because you have stipulated that you will not amend your complaint?” Bea asked just minutes into the hearing.

Schwarz argued next-friend status isn’t a jurisdictional question and because the issue wasn’t raised in the lower court case, it isn’t fair to address it now.

Smith then turned to the issue of injury, asking Schwarz repeatedly how Naruto has been injured by photographer David Slater’s use of his purported copyright.

Schwarz argued that the injury doesn’t necessarily turn on compensation, and the ability to obtain an injunction to prevent continued misuse of the copyright would qualify as redress.

Then conversation turned to the U.S. Copyright Act and issues of non-human authorship — which, believe it or not, prompted a brief discussion of same-sex marriage.

“Congress purposely did not define writings or authorship,” said Schwarz, arguing that the definition of author should be interpreted broadly.

Bea then rhetorically asked if the entirety of the Copyright Act must be considered — and broached the subject of whether Naruto could potentially have any illegitimate children. “Doesn’t the statute provide that the rights of the copyright will descend to children, legitimate or illegitimate?” Bea asked. “Are Naruto’s offspring ‘children’ as defined by the statute? Children to me, in the dictionary sense, are descendants of persons who leave them rights.”

“Yes,” Schwarz responded. “And ‘spouses’ in the dictionary sense … reflected a man and a woman in a marriage. That is no longer a case one would defend.”

“Is there a similar holding by the Supreme Court that man and monkey are the same?” replied Bea.

There isn’t. Still, Schwarz argues succession issues don’t preclude an animal from being an author.

Steering the discussion back to case law, Smith brought up the controlling case, Cetacean Community v Bush, in which the 9th Circuit held “[i]f Congress and the President intended to take the extraordinary step of authorizing animals as well as people and legal entities to sue, they could, and should, have said so plainly.”

“’Monkey see, monkey sue’ will not do in federal court,” he said. “Not unless Congress plainly says that non-human animals have standing.” Dhuey said it’s clear Naruto lacks standing under Cetacean, and used most of his time addressing why his client shouldn’t have to pay attorney’s fees.

“It’s really unfair that my client has been dealing with these arguments at the District Court and before this panel,” said Dhuey. “It’s a waste of resources. Cetacean controls. There’s no denying that.”

Bea asked whether Dhuey thought the panel should affirm based on Naruto’s lack of statutory standing or PETA’s failure to qualify as a next friend.

“You realize that, if we vacate the judgment and remand with orders to dismiss this complaint, a new suit might be brought by Naruto through a next-friend properly pleaded?” asked Bea.

“I guess that’s my next case, your honor,” said Dhuey, prompting laughter from the bench. “I would hope at this point that PETA stops and leaves my client alone.”

Then he turned things over to Angela Dunning, an attorney for Blurb (a site which Slater used to self-publish his book). The discussion that followed felt more like a philosophical analysis among legal scholars than actual court arguments, and took the hypothetical rights Naruto could have to their logical outer limits.

For example, Dunning argued, were Naruto to have a copyright in the photo, he would also have to provide written notice under the statute to other Indonesian monkeys who also claim an interest in the selfies. She used this as an opportunity to point out that there is a dispute as to whether PETA has accurately identified the monkey in the photo. They say it’s a male named Naruto, but Slater says it’s a female named Ella. 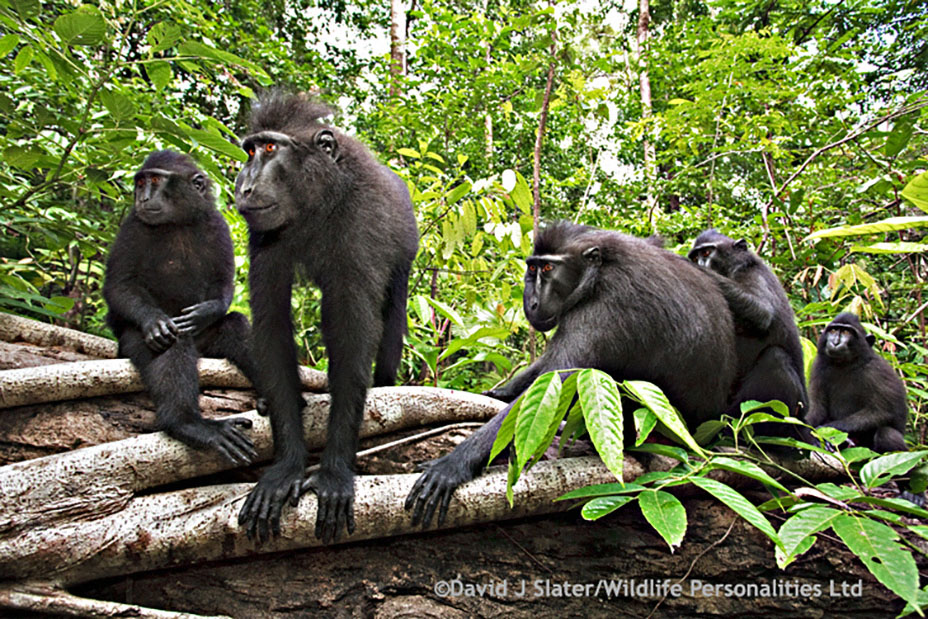 “Another section of the Copyright Act provides that a widow or widower of a deceased author is entitled to that author’s rights in the copyright, unless there are children or grandchildren,” Dunning said. “It is absurd to begin with to say that a monkey can sue for copyright infringement, but, if we’re going to accept that premise, then its offspring should be able to sue, too. This court should decline PETA’s invitation to go down that rabbit hole.”

Dunning also argued that Naruto can’t benefit financially from his work because he’s a monkey. “PETA would like to benefit financially from his work, but that’s a next-friend issue that your honor has already identified,” she said. “This case is not about one monkey in Indonesia and his copyright. This case is brought as a means of highlighting a larger policy issue that is important to PETA. … That is precisely what the Supreme Court said a next friend cannot do: use a real party in interest that can’t speak for itself to pursue its own agenda, no matter how noble that might be.”

During PETA’s rebuttal, discussion centered on the fact that its next-friend status wasn’t challenged until the appeal, when Engelhardt dropped out of the case, and whether having standing here would allow PETA to claim next-friend status for any animal regardless of its connection. (Watch it in full, below.)

After the hearing, PETA general counsel Jeff Kerr told The Hollywood Reporter he’s confident the organization is a suitable next friend for Naruto, whom he described as “unquestionably male.” Kerr also said if Naruto does win, PETA would administer his copyright revenue and has “committed that 100 percent of those funds would go exclusively to benefit Naruto and his community.”

Slater, meanwhile, tells THR the monkey in his photos is not Naruto — and, regardless of whether or not there’s a monkey mix-up in the suit, the copyright belongs to him. “Only if the monkey had picked up my camera, put in the exposure settings, decided where the tripod stood, then downloaded the images and processed them in the way I did, that would render the images not copyrightable,” he said. “But the fact is I set it up, decided the composition and exposure, had the idea and worked towards the results everyone loves.”

Harvey Weinstein Will Be Extradited to California

Flag on the Play: How an Ambush Interview Put Fox Sports Host in a Legal Red Zone (Guest Column)