Continue to The Hollywood Reporter SKIP AD
You will be redirected back to your article in seconds
Skip to main content
April 14, 2021 6:45am

Spring has brought a few glimpses of post-pandemic stability to the TV sports world. The NCAA men’s and women’s basketball tournaments put up fairly healthy ratings, and Major League Baseball has shown early promise, with games once again being played in front of some fans.

Those cautiously optimistic notes are a far cry from the cratering ratings seen by a number of sports last fall, when the World Series, NBA Finals and NHL’s Stanley Cup Final plummeted by 30 percent or more. Though there’s doubt about a full ratings recovery in the near term — “2021 is going to be a very sloppy year,” says Fitch Ratings analyst Jack Kranefuss — a leveling off of the declines is likely in the next several months, industry insiders tell The Hollywood Reporter.

With the sports calendar getting back to its normal rhythm, and the fevered news cycles of the pandemic and a presidential election having cooled some, TV viewers are beginning to filter back to the games. ESPN’s first baseball telecast of the year, on April 1, was its best Opening Day afternoon game since 2017, and CBS and Turner Sports’ coverage of the NCAA men’s tournament, while down 14 percent from 2019, suffered less than some other recent major sports championships.

“Now the challenge is, how do we get fans back in the building and how do we reestablish sports as an engine of social connectivity and a place where people come together?” says Michael Mulvihill, executive vp and head of strategy and analytics at Fox Sports. “When that happens, I think you’ll see viewership get back to more normal expectations.”

Leagues and broadcasters also are betting big on the power of sports to draw viewers. The NFL signed an 11-year, $100 billion agreement with its TV partners in March, and ESPN snapped up partial NHL rights for $2.8 billion over seven years. The NBA’s current media deal is in place for four more years, but according to sources the league will seek as much as $75 billion — a threefold increase over the current deal — in the next contract.

The big money flowing from those media deals into league coffers also makes sports a fairly stable investment despite disruptions of the past year, says Fitch Ratings director Henry Flynn: “From our perspective, it ended up being a pretty stable sector compared to some others. It may not seem obvious since sports was paused, but the revenue kept flowing for the most part.” 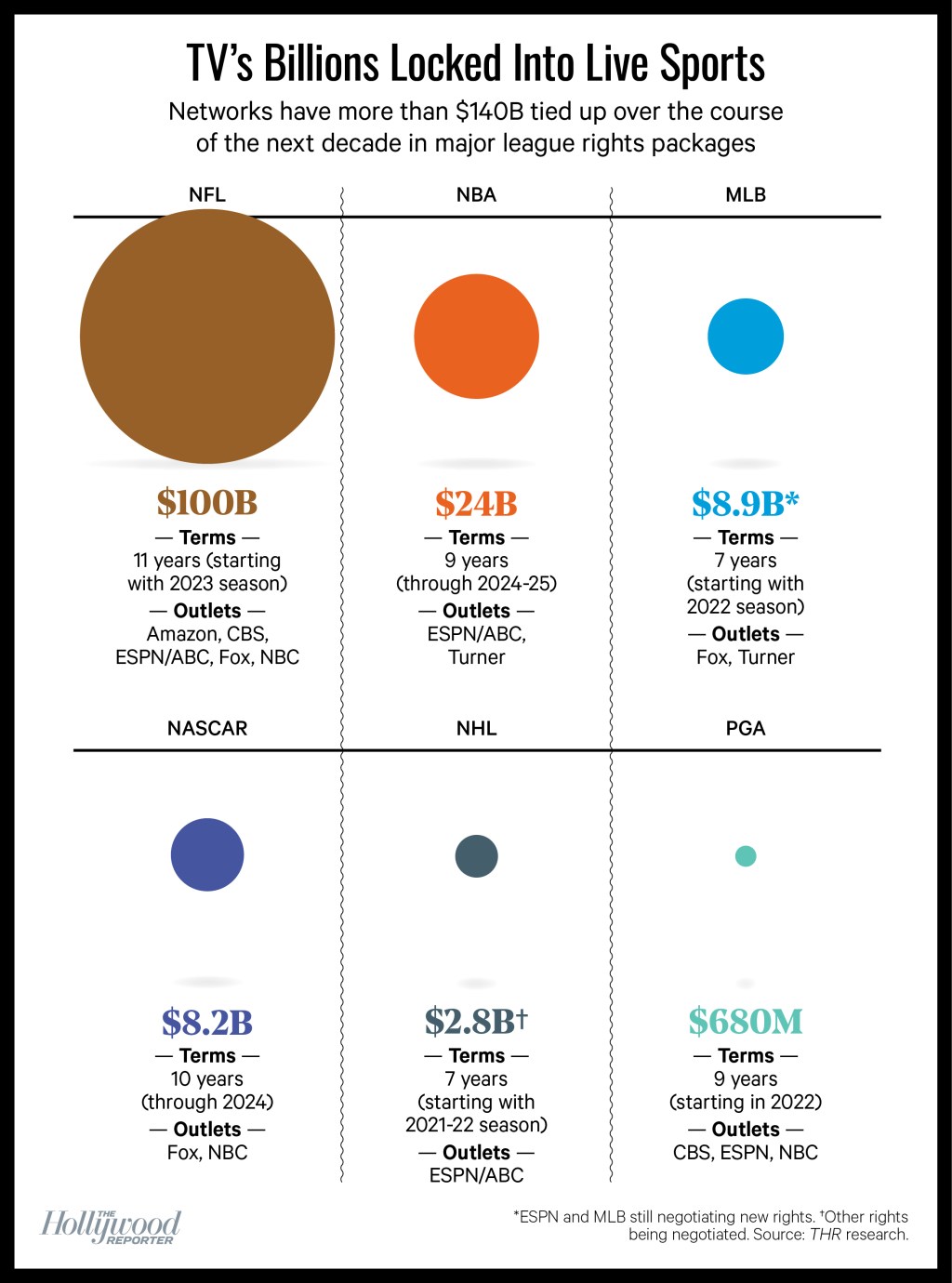 Despite those positive markers, however, no one is expecting a return to the sports viewership peaks of the mid-2010s, when the Super Bowl hit an all-time viewer high and the World Series and NBA Finals had their biggest audiences in more than 10 years. Televised sports are subject to the same downward pressures that the rest of linear TV has experienced, and ratings for sports have shrunk at a similar pace to that of overall TV usage, which has fallen about 15 percent in the past year. Subscriber counts for cable and satellite providers also are falling: Cable divisions of Comcast, Cox, Altice, Cable One and Mediacom together lost about 1.9 million subs by the end of 2020, while satellite providers DirecTV and Dish lost 3.4 million subs combined, per Leichtman Research Group. That decreases the pool of potential viewers for linear broadcasts.

“Our concern, if we have one, it’s more about the general trend of TV use than it is about interest in sports rebounding,” says Fox’s Mulvihill. “I think the share of viewing taken up by sports is probably going to increase this year. We just don’t know what the trend in that total pie of viewership is going to be.”

A shrinking viewer base, in fact, might even make sports rights more valuable. League and network sources note that while viewer counts have fallen, sports’ share of viewing is stable or growing — meaning it’s still among the most reliable ways to gather a big live audience. Key to the longterm health of sports on TV, says Kranefuss, is whether growth in streaming viewership can offset linear declines. It’s also why new rights deals have streaming components, and why streamers like ViacomCBS’ Paramount+ and NBCUniversal’s Peacock are making sports a key part of their pitch. “They’re driving people to streaming because most sports fanatics follow their sport wherever it goes,” Kranefuss notes.

Mulvihill observes that 90 percent of Fox Sports’ annual viewing comes in the fourth quarter, and he’s hoping fans will be able to fill — or mostly fill — stadiums for NFL, college football and postseason baseball games by then, “which contributes to a great TV product.” Adds the Fox executive: “I feel like we can look at September and the football season and baseball postseason with a lot of confidence that it’s going to look like a normal sports event. That will bring a resurgence of interest along with it.”

Yet the realities of the linear television business may mean sports ratings aren’t likely to return to their pre-pandemic levels. “I don’t think it’s going to be the Roaring ’20s,” says one network exec. “But we have a chance to be a kite in the wind.” 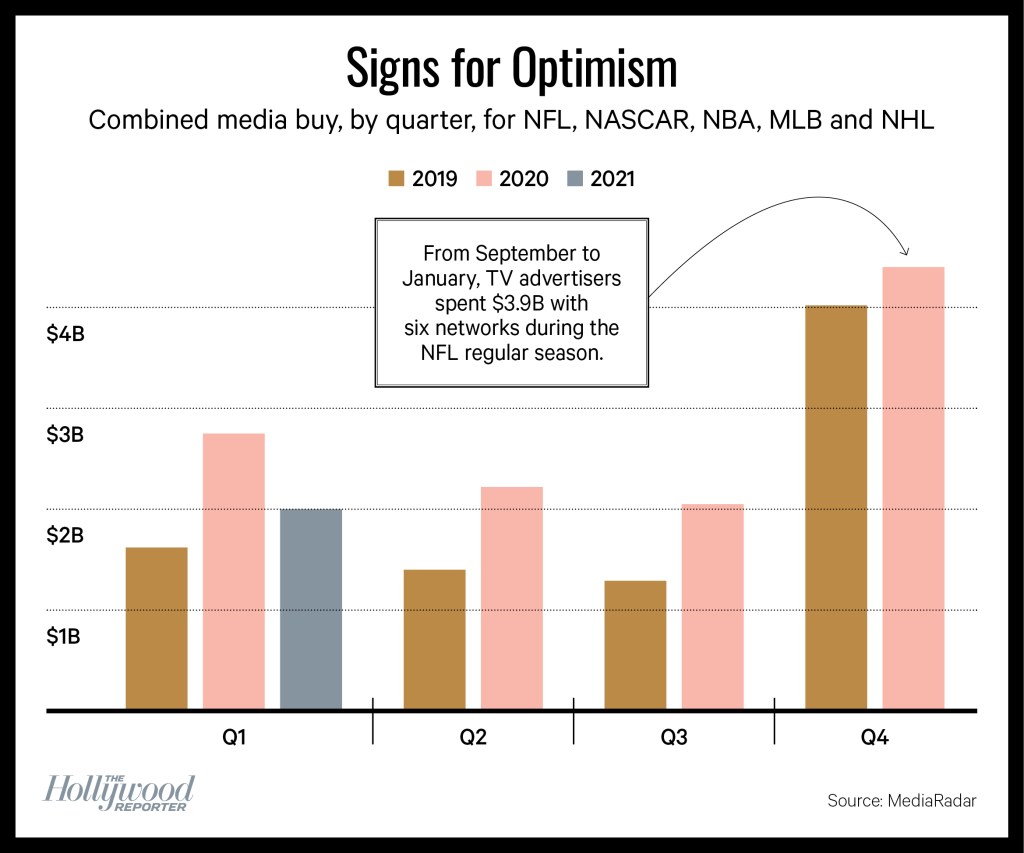