Movie theater chains are staring down an unprecedented crisis, as pandemic shutdowns are forcing operators in some areas to close while awaiting local authorities’ COVID-19 guidance. So it was no surprise that when Marcus Corp. — the fourth-largest circuit in the U.S., with 1,110 screens in 17 states — reported its latest financials on Nov. 3, CFO Doug Neis told investors the pandemic had led to “the two worst quarters we’ve ever experienced in our 85-year history.”

Marcus stock fell 58 percent in 2020, while the nation’s largest chain, AMC, dropped 71 percent and rival Cinemark closed off at 49 percent. But Wall Street observers are notably bullish on the Wisconsin-based Marcus, especially once a pandemic recovery arrives, given its tradition of conservative financial management.

The Marcus Corp. — which also includes a hotel division — operates cinemas via its Marcus Theatres unit in mostly suburban markets, including in New York, where it owns the Movie Tavern Syracuse Cinema, and owns, rather than rents or leases, the real estate behind 62 percent of its screens, according to a recent investor presentation. That means less potential conflict when negotiating rent or lease abatements with landlords as many exhibitors have been doing during the pandemic. The company noted that this ownership structure compares favorably with an estimated 9 percent for peers AMC, Cinemark and Regal.

“Owning the majority of our real estate is a significant advantage for us relative to our peers as it keeps our monthly fixed lease payments low and provides significant underlying credit support for our balance sheet,” president and CEO Greg Marcus tells The Hollywood Reporter. “It also allows us to move quickly as market dynamics dictate. When we moved to install recliners, add large format screens and build out very sophisticated food and beverage concepts, we did so quickly because we did not need to negotiate with a landlord.”

B. Riley Securities analyst Eric Wold in July upgraded his rating on the stock of Marcus from “neutral” to “buy,” saying he was looking “beyond the short-term disruption,” while continuing to rate AMC Theatres and Cinemark at “neutral.” Wold says, “Not only do we believe [Marcus’] real estate holdings should provide a baseline valuation for the company that the others cannot match, the meaningfully lower rent expense gives the company a lower four-wall break-even point as the theaters begin to reopen.”

Marcus’ rent expense for all of 2020 will amount to only 10.3 percent of its revenue, compared to 42.6 percent in the case of Cinemark and 76.2 percent for AMC, according to B. Riley Securities estimates. Given the lower fixed rent expense, Marcus can turn a profit more quickly than peers, analysts say. Plus, “having its theaters within suburban locations and not in downtown areas should provide an opportunity to outperform the industry with families and moviegoers staying closer to home and likely not going into downtown areas for work or entertainment,” Wold adds.

Barrington Research’s Jim Goss upgraded Marcus shares from “market perform” to “outperform” on Nov. 10, saying that the COVID-19 vaccine “should be an important contributing factor in pushing up the time frame for which consumers will be willing to return to theaters and studios advancing their release of films to these audiences.”

The case for Marcus is bolstered by “positive” steps that have boosted its liquidity, including a recent debt issue and tax refunds, “enabled by the company’s strong balance sheet entering the crisis,” Goss noted. The firm has also earmarked some surplus real estate for sale, saying that the proceeds could raise “tens of millions of dollars.”

While AMC and Regal owner Cineworld have struggled with high debt loads and diminishing cash, Goss said Marcus’ “level of liquidity should be sufficient to sustain operations well into 2021.”

Marcus’ CEO says industry fallout from the pandemic, such as a likely reduction in the number of movie screens, could also provide select buying opportunities as competitors rationalize their footprints. “We anticipate various real estate owners may be getting properties back from tenants,” Marcus notes to THR, but emphasizes: “We will continue to be disciplined in our investment approach as we evaluate any potential future opportunities.” 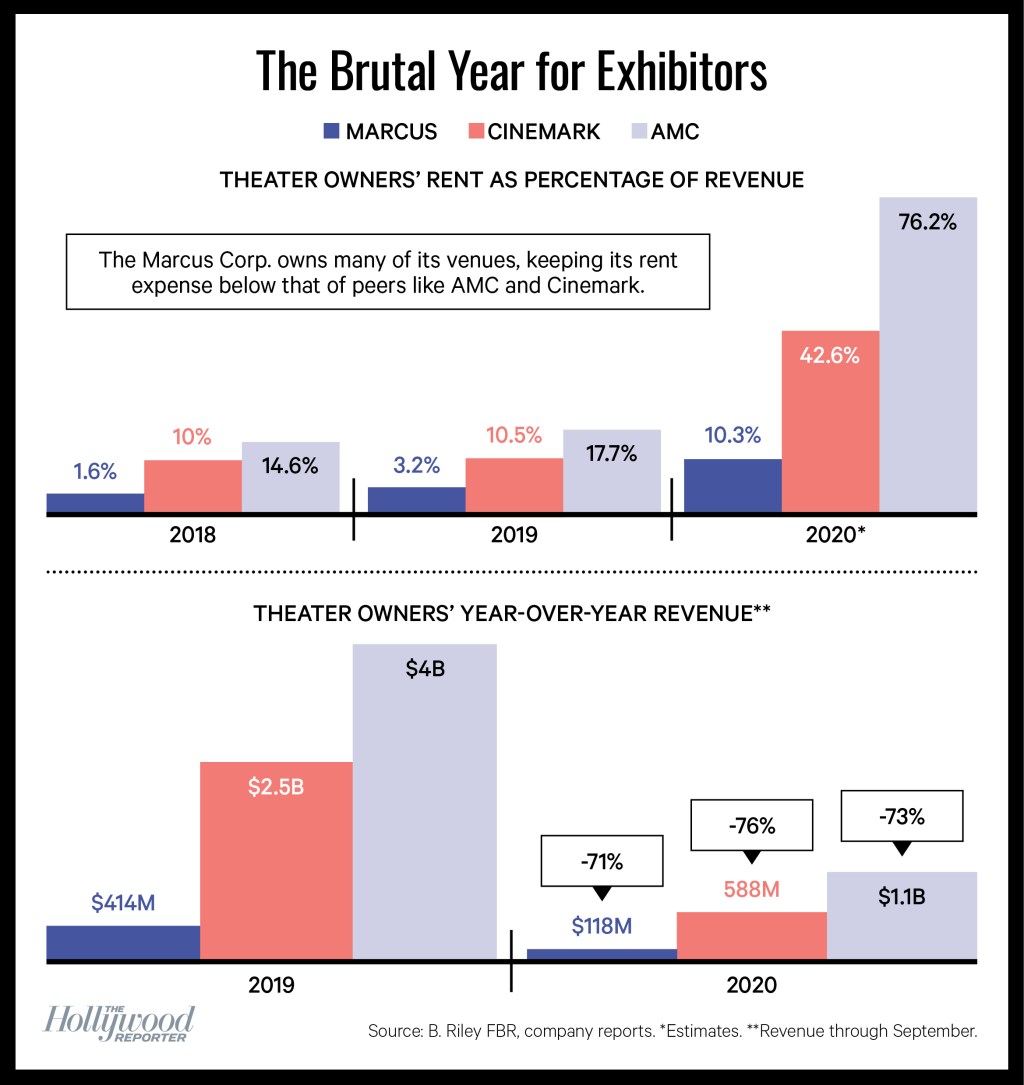