MSNBC’s Joy Reid, who just a week ago earned a promotion to nightly news anchor, is on the losing end of a big appellate decision that will shape the rules of many cases involving free speech.

In doing so, the federal appellate circuit decided that special laws enacted by states like California to protect First Amendment activity don’t apply in federal court.

La Liberte sued over statements about the following picture … 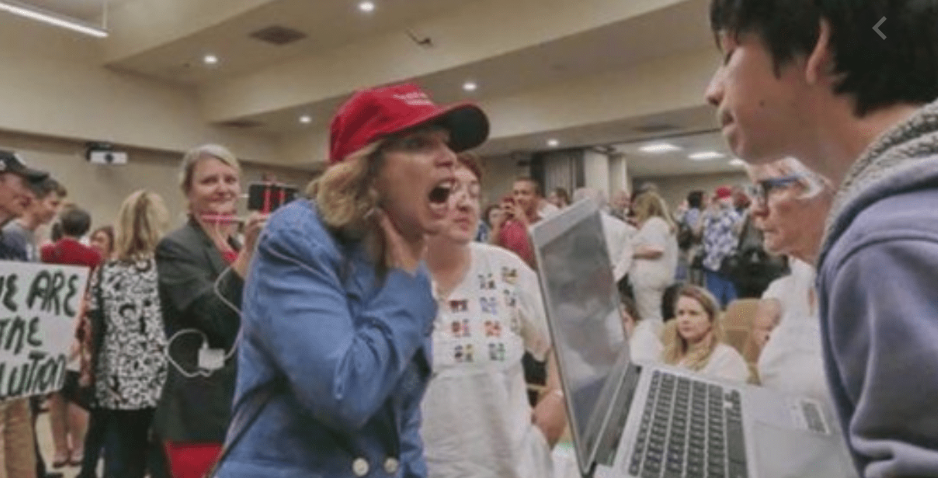 La Liberte is the one in the MAGA hat. The scene is a city council meeting in California during debate over SB 54, aimed at limiting local law enforcement cooperation with federal immigration authorities.

Joe Turkel, the Bartender in 'The Shining,' Dies at 94

Reid was hauled into court after she retweeted an activist who had posted the above picture along with the caption, “You are going to be the first deported.” In a second post on Instagram, she wrote that the woman in the photo had screamed “You are going to be the first deported … dirty Mexican!” Subsequently, on Instagram and Facebook, Reid reached back to history and wrote, “Make the picture black and white and it could be the 1950s and the desegregation of a school. Hate is real, y’all. It hasn’t even really gone away.”

Last September, Reid prevailed at a district court. The judge ruled that La Liberte was a limited purpose public figure because she had injected herself into public controversy around immigration. And, according to the judge, La Liberte couldn’t demonstrate that Reid acted with actual malice when she had wrongfully written that the woman had screamed “dirty Mexican.” (The boy in the photograph gave an interview to a local TV station where he stated La Liberte was trying to keep things “civil.”) Since public figures must demonstrate malice in order to prevail on libel claims, La Liberte’s suit had failed.

On appeal, La Liberte argued that the judge had wrongfully dismissed the suit and shifted attorney fees to the winner under California’s anti-SLAPP statute. That’s a law intended to deter frivolous litigation aimed at usurping First Amendment activity. The way it works is that after a complaint is filed, a defendant brings a motion to strike under the anti-SLAPP statute. Unless a plaintiff can convincingly show a likelihood of ultimately prevailing on his or her claims, the case is stopped. No discovery. No trial. Fewer legal bills for the defendant.

The problem is that anti-SLAPP laws around the nation are under assault. Under federal rules of civil procedure, to survive a motion to dismiss, plaintiffs must only show the plausibility — not the probability — of claims. Under this lesser standard, escaping a suit becomes more tough.

Is there a conflict between the SLAPP statutes and federal rules? Justice Brett Kavanaugh and many conservative judges believe the answer is yes. They think that states are dictating how federal courts run. Appellate circuits throughout the nation are split on the question of whether federal judges may entertain anti-SLAPP motions. The Fifth, Eleventh, and D.C. Circuits have decided they may not while many of the other circuits (including California’s Ninth) have gone the other way. It’s an important issue that is almost assuredly destined for the Supreme Court.

Today, the Second Circuit — which covers New York and is arguably the most important in media circles — decides that anti-SLAPP doesn’t apply in federal court.

“Reid urges us to follow the Ninth Circuit, which holds that California’s anti-SLAPP statute and the Federal Rules can exist side by side … without conflict,” writes Judge Dennis Jacobs. “We disagree.”

The opinion is a huge setback to media organizations, which filed an amicus brief at the Second Circuit with fear that a conclusion like the one reached today would lead to frivolous libel suits. (Not just libel suits either. SLAPP motions have aimed to protect First Amendment activity like writing movie scripts, publishing private medical information about athletes, and casting actors in television shows.)

After coming to the conclusion that SLAPP rules impermissibly regulate procedure, Jacobs tackles other issues including what he determines to be the district judge’s erroneous conclusion that La Liberte is a public figure. He writes that it isn’t enough that she attended meetings about California’s immigration law and spoke up publicly and had her photo taken by news photographers.

“Thin as the findings are to begin with, the district court did not take into account the requirement that a limited purpose public figure maintain ‘regular and continuing access to the media,'” states the opinion.

Jacobs notes that part of the reason for imposing an actual malice requirement on public figures is that they have alternative access to media channels enabling them to protect their reputations when someone says something false. “La Liberte plainly lacked such media access,” writes the appellate judge.

The big conclusions don’t stop there. The Second Circuit then tackles whether Reid enjoys immunity under Section 230 of the Communications Decency Act, which affords tech services and users of tech services immunity for content posted by third parties. Can Reid escape trouble for what she retweeted? This legal battle sidestepped that interesting question (as noted in a footnote in today’s opinion), but nevertheless didn’t end the CDA issue altogether because Reid’s lawyers argued that she had essentially just republished what someone else had written on social media.

The appellate court disagrees with Reid and says she isn’t protected by CDA 230.

Jacobs writes that the activist had originally tweeted “they yelled” at the teenager whereas Reid was the one who authored a post attributing the remark to La Liberte. The judge remarks that the MSNBC host “went way beyond her earlier retweet … in ways that intensified and specified the vile conduct that she was attributing to La Liberte. She accordingly stands liable for any defamatory content.”