In late June, as a fierce debate over President Trump’s family separation policy raged, a viral Twitter post caught the eye of MSNBC host Joy Reid. An activist, Alan Vargas, tweeted a photo of a woman in a “Make America Great Again” hat seemingly yelling at a high school student during a City Council meeting in Simi Valley, California. The woman, Roslyn La Liberte, was among a crowd that was said to have called the student a “dirty Mexican” and told him “You are going to be the first deported,” Vargas’ tweet claimed. Vargas wrote in the post, “Spread this far and wide.” Reid clicked the retweet button, sending the message to her 1.2? million? followers.

But the MAGA-hatted woman, La Liberte, didn’t actually say those things to the student. A week later, after local news coverage of the incident, Reid tweeted an apology to La Liberte and the teenager, saying, “It appears I got this wrong.” That didn’t stop La Liberte from filing a lawsuit Sept. 25 against Reid for defamation and requesting punitive damages.

Several of Reid’s social media posts are at issue in the lawsuit, but it’s her retweet of Vargas’ comments that proves the most legally interesting. As Reid’s legal team prepares its response, the fight is spotlighting an issue most Twitter users likely haven’t considered: Yes, it is possible to be liable for defamation by retweeting someone else’s defamatory statement. “Certainly, a retweet is a form of republication,” says Marvin Putnam, an entertainment litigator at L.A.’s Latham & Watkins. Litigator Jeremiah Reynolds agrees, saying, “If you tweet about someone and say they’re racist, or retweet someone else [saying it], and you don’t have any evidence of that, you could be liable for defamation.” 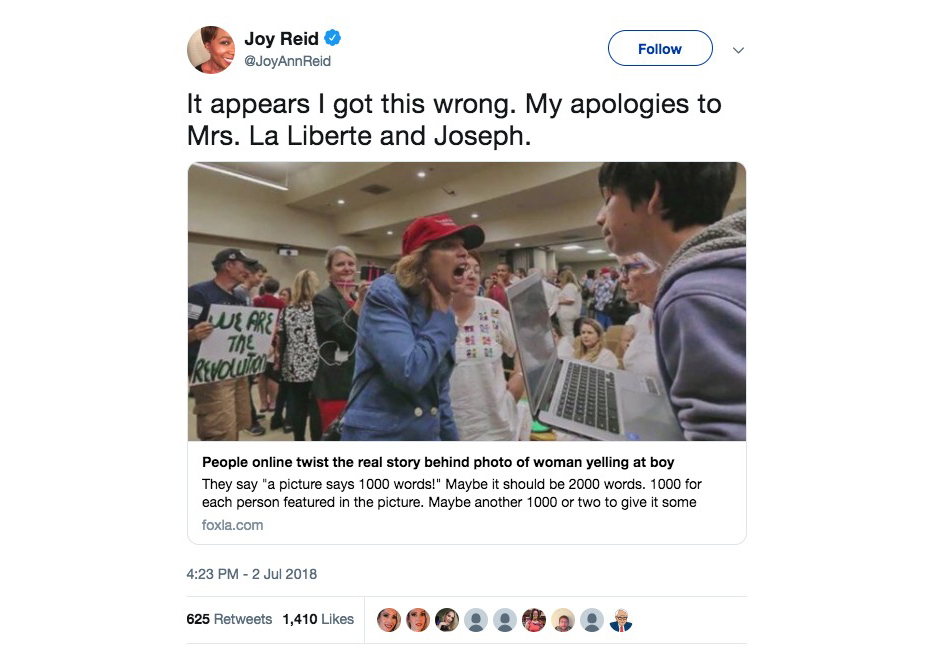 Experts are split on whether the underlying tweet from activist Vargas is actually defamatory, but they agree Reid’s retweet could make her liable for defamation if the court finds that it is. Defamation law has?a rule regarding republication that essentially says a person who repeats defamation is as liable as the person who originally said it. As to the actual contents of Reid’s retweet, whether it’s defamatory is complicated. La Liberte is likely not?a public figure, meaning she’s not subjected to a higher legal standard, but the tweet centers on an issue of national importance: immigration.

“While the people are private figures, the issue is of public concern,” says?Putnam. “If you don’t know it is not true and have no reason to believe it is not true, then it should be fine as this is a matter of public interest, which requires actual malice before there can be liability when wrong.”

Also factoring in the case is the tendency of Twitter users to spew nonsense. “In the Twitter context, courts have seemingly adopted a higher standard for what can be considered defamatory because there’s so much inflammatory content that happens on the site,” says Reynolds. “Everyone is reasonably expecting hyperbole and inflammatory rhetoric, and, to me, this falls in that category.”

Entertainment litigator Lincoln Bandlow predicts Reid will lose the case on summary judgment. “[La Liberte’s attorney] Lin Wood is one of the best plaintiff’s defamation lawyers in America. The woman is clearly a private figure,” he says.

A verified Twitter user with a million-plus followers, like Reid, is much more likely to be?a target, both because the person probably has more financial resources and because the account has a broader reach, but even someone with an egg for a Twitter avatar and just a few followers could be found liable. “The publication doctrine requires just one other person besides the speaker and the subject to hear the statement,” says Bandlow, adding that a large following “exponentially changes the damages?computation.”

Claiming “retweets don’t equal endorsements” in your Twitter bio isn’t likely to offer much protection either. “I don’t think you’re protected simply because you say you’re not endorsing what this other person says,” notes litigator Michael Weinsten. “What you’re doing when you retweet is you’re advancing a defamatory statement and making it more accessible to the rest of the world.”

The other high-profile case on the books concerning this topic is pending appeal. Actor James Woods was sued in March 2017 after he posted on Twitter a photo of a woman giving a Nazi salute at a 2016 Trump rally next to a picture of an Ohio woman named Portia Boulger, who had been identified as the person in the photo by other Twitter users, which he captioned “So-called #Trump ‘Nazi’ is a #BernieSanders agitator/operative?” The woman in the Nazi photo wasn’t Boulger, and she sued for defamation. Woods got the case thrown out at an early stage by arguing that it was clearly a question and not a statement of fact. Boulger appealed, and the parties argued before the 6th Circuit Court of Appeals on Oct. 16.

That Woods won the first round isn’t necessarily a good sign for Reid. The decision hinged on punctuation, which isn’t an issue in her matter. “Were it not for the question mark at the end of the text, this would be an easy case,”  wrote U.S. District Judge George Smith in his Jan. 24 opinion.

“When you analyze a defamatory statement, you have to analyze it in the context it was made,” says Weinsten, who represented Woods in a different Twitter-related case. “If you’re looking at a potentially defamatory retweet, and you’re looking at the context in which the average viewer is interpreting that retweet, do you include Joy Reid’s statements about the incident on other social media platforms?”

The Woods matter doesn’t provide much guidance on the issue because, while Smith noted that Twitter as a platform presents novel issues when it comes to context, he stopped short of defining the appropriate parameters of context that should be used for analysis.

Smith found the character limit gives users space to express “a single coherent thought” but not to “surround that thought with context and nuance.” He also noted that Twitter users don’t read a person’s entire collection of tweets in chronological order, so any follow-up messages retracting a potentially damaging statement might not offer much help.

It also remains to be seen how the court will consider Section 230 of the Communications Decency Act of 1996, assuming Reid’s lawyers make the argument that it shields her. The text, which was written a full decade before Twitter was created, states “No provider or user of an interactive computer service shall be treated as the publisher or speaker of any information provided by another information content provider.” The social media site has used Section 230 to defend itself in lawsuits, but the Act’s protection of users has yet to result in clear case law in this context.

Regardless of whether both of these cases end in wins for the plaintiffs or defendants, experts say it’s vital to think before retweeting. And, unless the contents of a tweet have been verified as accurate, users would be wise to couch the retweet with an explanation that they don’t know if it’s true.

“Words matter,” says Putnam. “They have probably never mattered more. Everybody now can have a platform. Understand that what you say has real ramifications. That doesn’t mean you shouldn’t’ say it, but it does mean you should be mindful of what you’re saying.”

A version of this story appears in the Nov. 7 issue of The Hollywood Reporter magazine. To receive the magazine, click here to subscribe.