Continue to The Hollywood Reporter SKIP AD
You will be redirected back to your article in seconds
Skip to main content
January 13, 2021 7:00am

In August 2018, Netflix hired veteran diversity consultant Vernā Myers as its first-ever vice president of inclusion strategy, a move that came after an internal crisis in which its then-chief communications officer used the N-word in multiple conversations with colleagues and was fired.

The company has now revealed the efforts of Myers’ team so far in its first-ever inclusion report. Penned by Myers and accompanied by a nine-minute short film featuring a diverse cross-section of employees across Netflix, the report’s title — “Sowing the Seeds: Inclusion Takes Root at Netflix” — frames the past two years as a foundation-laying chapter in its ongoing work to cultivate a culture of inclusion at the company.

The report includes the company’s latest demographics data, which it has published quarterly since 2013. As of October 2020, 47.1 percent of Netflix’s 8,000 full-time streaming employees worldwide were women, up from 40.3 percent in 2017 (when the company employed 3,371 people full-time). That gender ratio remains consistent up the leadership chain — even among the most senior rank, which is comprised of 10 women and 11 men. Although female employees are outnumbered in technical roles (34.9 percent), they represent a majority of employees in creative and corporate positions (55.1 percent). 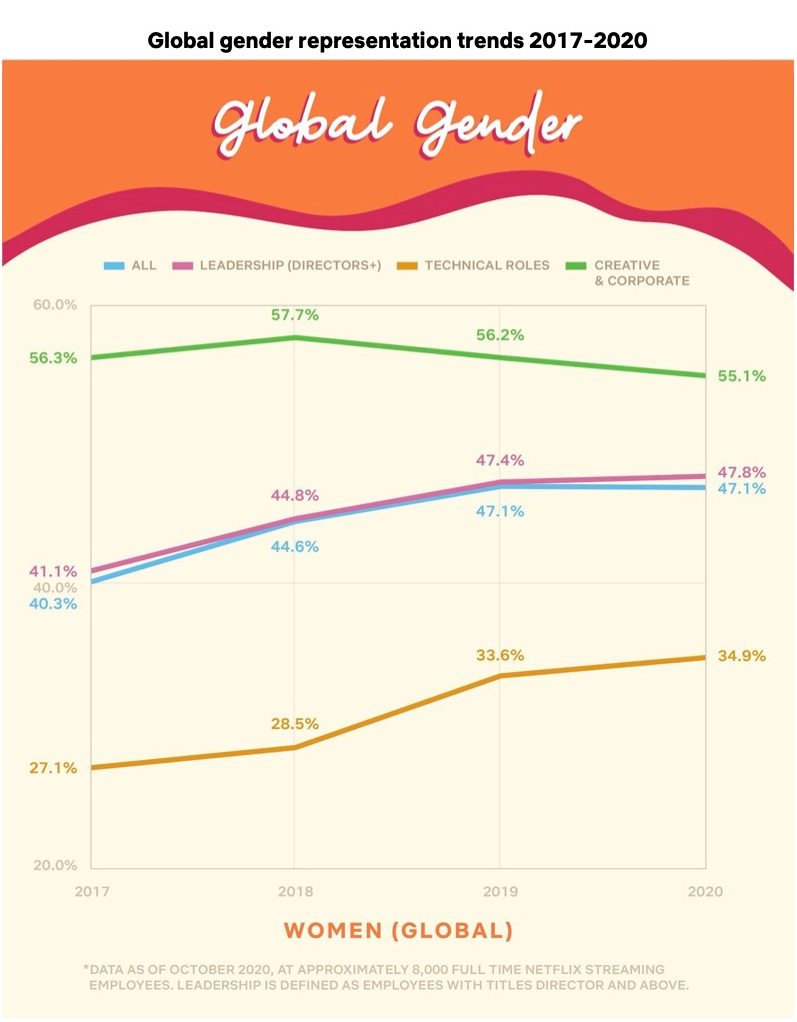 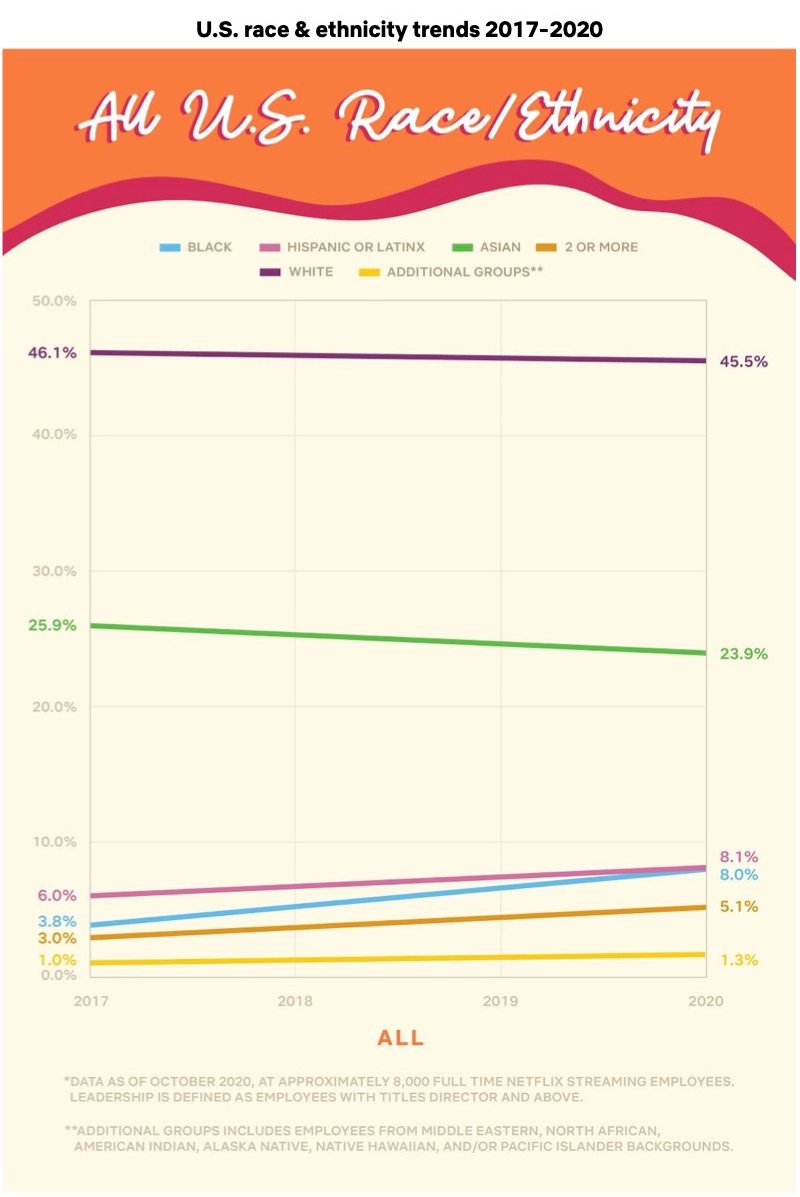 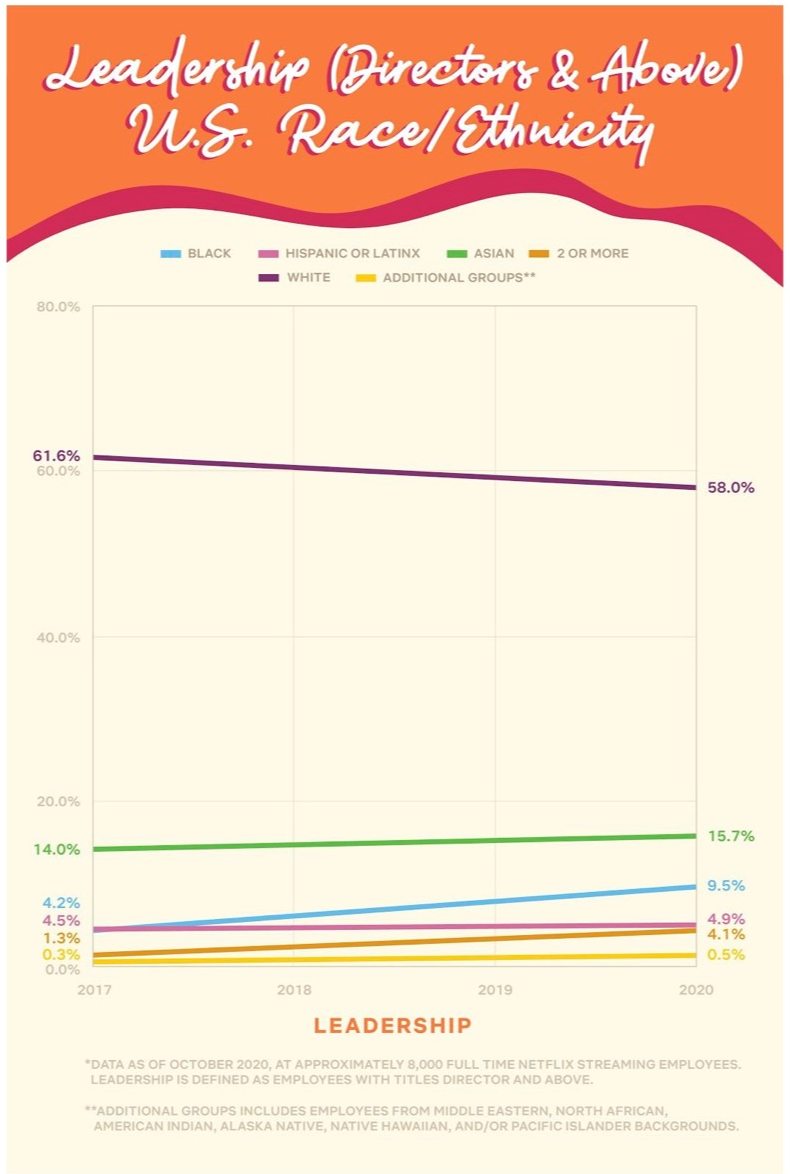 But Netflix’s inclusion report spends more time providing a qualitative review of the inclusion strategy team’s efforts. The team began in 2018 by sitting in at various meetings across the company to provide an “inclusion lens”: the perspective that raises and considers questions of authenticity, bias and presence (or absence) of certain voices. But, as Myers writes, sustainable cultural change in the workplace requires training and equipping every employee with that lens.

The team began to conduct in-person workshops to train employees on the language and concepts of inclusion, such as a 2019 convening in Utah of Netflix vice presidents from its offices worldwide to examine their own privilege and marginalization. These workshops on self-reflection gave way in 2020 to workshops on allyship, where the in-house Netflix team brought in outside experts including White Fragility author Robin DiAngelo, Kimberlé Crenshaw (who developed the concept of intersectionality) and anti-oppression trainer YK Hong. In total, Netflix’s inclusion strategy team has run more than 120 workshops, with more than 5,600 employees participating.

Other areas of focus that Netflix highlights in its report include the hiring process, wherein director of inclusion recruiting Kabi Gishuru has overseen the training of more than 200 Netflix recruiters in how to spot bias in the interview process and where to find candidates in non-traditional pipelines (two such solutions: a technical boot camp for HBCU students and mixers for top Netflix execs like chief talent officer Jessica Neal and COO Greg Peters to network with peers in their field from underrepresented backgrounds).

Moving forward, the report identifies three priorities for the inclusion strategy team as its initial efforts begin to take root: continued recruitment of underrepresented workers, particularly Hispanic/Latino candidates and especially in the leadership ranks; investigating what inclusion looks like outside the U.S. (in September the company tapped Cassi Mecchi from Spotify to lead these efforts in Europe, the Middle East and Africa, and will hire additional inclusion team members for Asia Pacific and Latin America this year); and exploring how to measure the company’s “inclusion health,” a status that goes beyond hiring to include retention, promotion, tenure and compensation as well as an employee’s experience of belonging (to facilitate the latter, Netflix currently has 15 Employee Resource Groups, including Accessibility, Vetflix and Indigenous@Netflix).

“The neutral period is over, we need the courageous period,” Myers writes. “This work is not about perfection—it’s about humility, vulnerability and unlearning as much as it is learning. If we keep trying to get this right, a new season of equality will bloom.”