Orby TV, an L.A.-based startup led by former Starz executive Michael Thornton as CEO, is looking to make a business out of a segment of the pay TV market that sector giants have typically not targeted. The company recently launched what it says is the first dedicated U.S. pay-as-you-go satellite television service for people who aren’t interested in paying for bundles that include broadband or other products.

Orby TV instead offers free local channels and select cable networks for $40 per month, or $50 for a package with additional networks, plus the option of adding premium networks from the likes of HBO and Starz for $6 to $18 a month. Among the networks available via Orby TV are ones from Viacom, Discovery and AMC Networks, but Walt Disney’s and NBCUniversal’s channels are among those not available.

The company started marketing its service, which is available in the contiguous United States and requires no credit checks or contractual commitments, this spring and targets what Thornton describes as a gap in the U.S. market for a dedicated prepaid pay TV service, which is similar to the more common mobile phone prepay services.

“Orby TV is focused on those customers who are fed up with the high cost [of traditional pay TV] and who are looking for low monthly prices for a rich offering of networks and the month-to-month flexibility of no contract without the requirement for Internet,” he tells THR, highlighting his team’s focus on the estimated 30 million U.S. households that don’t have or want a high-speed connection.

How unusual is the company’s model? “We are the only offering that is dedicated to the prepaid market and doesn’t have any other offerings,” Thornton says. “There are others where you can get prepaid, but it is definitely not something that the rest of the market is focused on.”

Indeed, big pay TV companies have typically had their core focus on their broadband services and on customers who take multiple services as those provide higher average revenue per subscriber and lower subscriber churn.

Given that and the fact that some have raised questions about the future of pay TV in the age of cord-cutting, Thornton acknowledges: “We are kind of zigging, while other people are zagging.” But he highlights that while the growth of streaming video has been in the spotlight, not everybody has access to or wants to pay for high-speed Internet access, providing a market opportunity for Orby TV.

“Our classic early adopters are people who are fed up with paying significantly more than $100 just for their video connection and want the choice to have a smaller package and the flexibility to come in and out of that package,” he explains.

While he wouldn’t share initial subscriber figures, Thornton says “we are very pleased with the early signs of our growth” and “all indications are that the message really resonates.”

Orby TV’s two programming packages are called Essentials, which costs $40 a month for up to four rooms, and Extras, which is priced at $50 per month. The company also offers optional premium add-ons, namely HBO channels for an extra $18 monthly, Cinemax channels ($12 per month), Starz channels ($9 per month) and Epix networks ($6 per month). All fees and taxes are included in the monthly prices, and local channels and the use of the Orby TV interactive program guide are provided at no additional charge even when the subscriber turns off the monthly service.

“Orby TV has created a quality service, with flexibility for consumers and a terrific new way to enjoy a wide collection of fan-favorite passion brands from Discovery,” said Elisa Freeman, executive vp domestic and Canadian distribution, Discovery. “We are proud to be prominently featured in Orby TV’s Essentials and Extras packages. This carriage agreement demonstrates Orby TV’s commitment to provide high-quality content to its growing subscriber base, and the continued viewer appeal for Discovery’s world-class programming, brands and talent.”

Thornton says that the content partners that Orby TV is working with believe in the company’s target market, which the company and its partners see as underserved.

Does Orby TV think of itself as offering a skinny bundle of pay TV? “I guess in some ways you can think of it as a skinny bundle” with an entertainment focus, Thornton says. “You do get, whether it’s through broadcast or TNT and TBS, a splattering of very high-end sports. But in general, we have avoided the national high-end sports and the regional sports networks, which are both very expensive.”

Subscribers can use a smartphone app to pause their subscription and reconnect without additional fees. Orby TV hardware is available for purchase in all Best Buy and select Target stores, as well as some from independent dealers and online.

As far as the necessary hardware, sourced from companies in South Korea and Taiwan, is concerned, the Orby TV receiver with remote control costs $100, with a DVR-enabled option being available for $200. Professional installation is offered for as low as $150 for the first receiver or DVR, with each additional one costing $50.

Privately held Orby TV, which has a single outside investor in the form of a pension fund, targets to be profitable in three years, says Thornton. “We are really focused on getting the mix right and getting the message to potential customers,” he says. “We will constantly listen to feedback and hope to end up serving a big portion of our marketplace.” 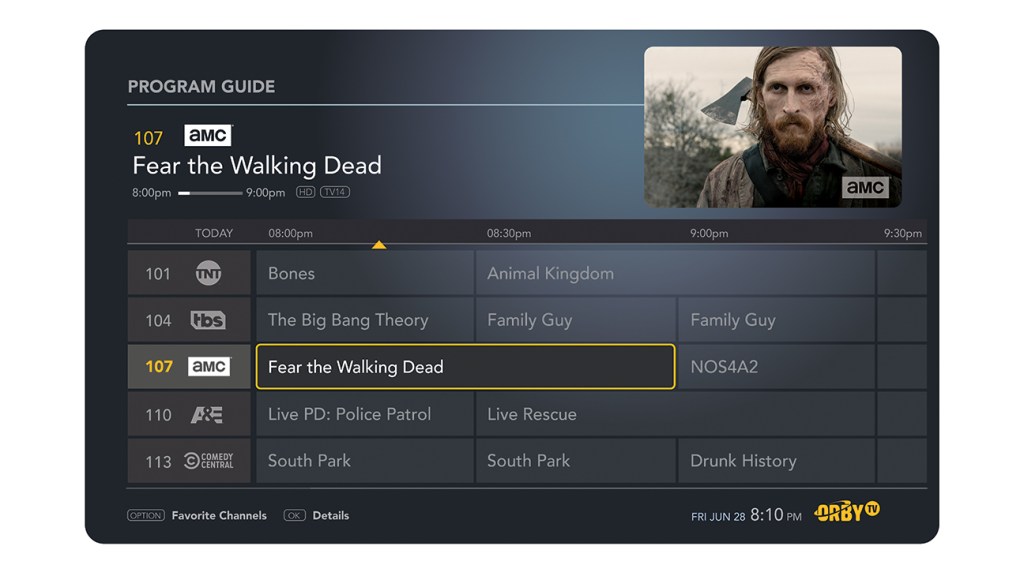