With sitting SAG-AFTRA president Gabrielle Carteris opting not to seek reelection this year after five years in the role (secretary-treasurer Camryn Manheim also won’t be running again for her position), the performers’ union is bound for a leadership shake-up when 2021 national election votes are tabulated Sept. 2. And the four candidates now vying for the high-ranking roles are locked in a contentious battle for votes — with diverging views about how best to lead the union’s 160,000 members during a tumultuous time in Hollywood.

Leading the ticket for the Unite for Strength party, affiliated with Carteris and Manheim, are veteran activists Fran Drescher (star of The Nanny, who is running for president) and Anthony Rapp (of Star Trek: Discovery and vying for secretary-treasurer). Rival group Membership First, meanwhile, is supporting Matthew Modine (Stranger Things) for president a second time after he lost in 2019 to Carteris as well as Ellen actor Joely Fisher for secretary-treasurer; they are touting their time on the union board.

Despite the candidates’ differences in background — Drescher is arguing she will bring fresh ideas and political know-how to the table, while Membership First is declaring that experience in internal politics will serve Modine well — both parties are talking up their focus on health care, the TV/theatrical agreement, member education, diversity and safety from sexual harassment. Whoever wins will be faced with addressing the lingering challenges of COVID-19, major studio contract talks, the fallout from recent changes to the union’s health plan and an ever-shifting distribution and monetization landscape.

“This is a critical time to leverage our forces to achieve the optimal economic gain at the negotiating table, and my experience on Capitol Hill and running a nonprofit has given me that skill set,” Drescher told The Hollywood Reporter by email. “I hope to unify our membership as one powerful and organized force.” (All president and secretary-treasurer candidates answered questions only in writing; Fisher did not submit her responses by press time.)

For his part, Modine says, “I am running to ensure that our members continue to participate financially in the success of the content that we help to create. It is essential that we intelligently prepare and anticipate changes in the ever evolving landscape of our industry.”

When it comes to top priorities in two critical upcoming negotiations — in 2023 for the union’s TV/theatrical agreement and in 2022 for its commercials contract — the presidential candidates are largely mum, saying it would be unwise to show their hands publicly before talks begin. However, Modine notes that his goal is “to fiercely defend and represent all of our members in each of the disciplines … during contract negotiations and always.” Drescher adds that “wages, benefits and safety will always lead,” with an additional focus on diversity; she also wants to “bring even more high-profile members into the process.”

On their party platforms, both groups say they ultimately want to bolster contract enforcement and grow residuals. Unite for Strength stresses in part its wish to raise pay rates, especially for lower-budget new media, while Membership First says it will work to end what it calls “pre-paid residual” contracts, which it says “hide future potential earnings in the members’ original fee” or effectively buy out future residuals in an initial payment, and transform streaming residual calculations.

Health care remains an explosive issue at the union after a cost-cutting restructuring of the union-affiliated SAG-AFTRA Health Plan — which is administered by a board of trustees picked partially by the union’s national board and partially by employers — was announced in 2020. Estimated to ultimately prompt 10 percent of the plan’s active participants, 9 percent of their dependents, about 8,000 retirees and 4,000 of their dependents to lose their coverage, the changes, some of which took effect Jan. 1, triggered a class-action lawsuit. Led by a group of actors including Membership First-affiliated national board member Ed Asner, the complaint alleges, among other claims, illegal age discrimination. (The health plan is seeking dismissal of the suit and has argued the plan and trustees are not fiduciaries and did not breach fiduciary duty.)

Top candidates are pledging to look far and wide to bring further coverage to members: Drescher cites current resources that may help union members struggling with health care, including the new AFL-CIO Medicare Advantage plan for Medicare-eligible union members and spouses and Congress’ subsidization of COBRA under The American Rescue Plan Act until the end of September. Drescher adds that, if elected, she will explore options for additional coverage through avenues like outside partnerships and lobbying efforts and task trustees that the union’s national board appoints with finding their own fixes. Modine wants to launch an investigation into the health plan’s management and make changes to ensure “that our members’ residuals count as contributions to their Plan.”

One solution leaders of both parties are arguing for: raising the “caps” (employers pay a percentage on top of earnings to the health plan, up to a certain threshold) on employer contributions to the plan. “The structure of how they determine caps is outdated, ungenerous and harmful, and I believe it’s widely misunderstood by members. It must be profoundly altered,” says Unite for Strength’s Rapp. Membership First’s party platform proposes caps be raised to $41,000 for a half-hour project, $67,000 for an hour project, $636,000 for features and $617,000 per employer.

Top candidates also agree that the union needs to reevaluate the ceiling on dues paid by its highest-earning members. The dues cap for all members except broadcasters is now $500,000 annually. And both parties say they place an emphasis on teaching members how the union works and combatting sexual harassment; when it comes to diversity initiatives, Membership First is in part looking to implement changes for performers with disabilities and to strongly enforce the union’s policy of nondiscrimination and diversity. Unite for Strength talks up its work on the union’s Diversity Action Plan and Stop the Hate Week Summit, among other initiatives, on its platform. Rapp adds that, if elected, he would work to institute a code of conduct for all union members and protocols for training above- and below-the-line crew on workplace issues for trans and nonbinary actors.

The parties diverge when it comes to their focus on local and national politics. Unite for Strength emphasizes its legislative agenda, which includes working on the California Film & Television Tax Credit Program and the Performing Artist Tax Parity Act in Congress. Rapp says the union must advocate for universal health care to “free our members from the fear of not having adequate coverage for themselves and their families when they need it most.” Unite for Strength leaders also seek to strengthen ties to the larger labor movement: “United we stand, divided we fall,” Drescher says.

Membership First is more inward-looking: “We simply can’t move forward without first repairing our union’s foundation,” Modine says when asked about policy priorities. Some ideas the group has proposed on its platform are changing the union’s split pension plans, launching a union-owned online casting platform that would be free for members, institutionalizing disability and dance coordinators on sets and developing more talent showcases at locals for casting professionals and talent reps.

Major industry players who have endorsed one of the parties say the groups differ in their approach to leadership. Actor-director Adam Arkin (Pig), a former national board and L.A. local board member with Unite for Strength, says that in his experience in union politics, “Unite for Strength had a much firmer grasp of the realities and challenges our members would face as the industry was changing at lightning speed.” This year, the group “will bring strategic wisdom and a cohesive, unified approach to the contract negotiations and ongoing advocacy that SAG-AFTRA members deserve.”

Jane Austin, a stunt performer (Avatar 2), former secretary-treasurer of the union and self-described independent candidate for the national and L.A. local boards who has endorsed Modine and Fisher (Membership First includes her on their suggested ballot on their website), says that “Membership First is very inclusive, they’re very transparent, they’re very member[-oriented], as in their name. It really is about including people, hearing the conversation, having the communication.”

To win, top candidates will need to energize union members; only slightly more than 20 percent of members voted in the past two national elections. Some major endorsers’ votes have been influenced by the experiences of their performer circle or their own relationships with top candidates.

Membership First supporter and Star Wars actor Mark Hamill says one of the major issues he’s concerned with is health care: In his work with actors in the voiceover community, he’s observed that “it’s crucial to so many members to be able to have those residuals counted toward their health care.” As for Unite for Strength candidates, Hamill adds: “I like all of those people, many of whom I know personally. But they’ve had 12 years [occupying the president role].”

Actor-director Jonathan Frakes (Star Trek: The Next Generation) said he endorsed Unite for Strength this year because he’s worked with Rapp and L.A. local presidential candidate and Community actor Yvette Nicole Brown and admires their work ethic and personalities. He’s hoping the union’s next top national officers clarify streaming residuals, stabilize the finances of the pensions and manage the fallout from changes to the health plan. “It’s embarrassing,” Frakes says, “and that needs to be sorted.” 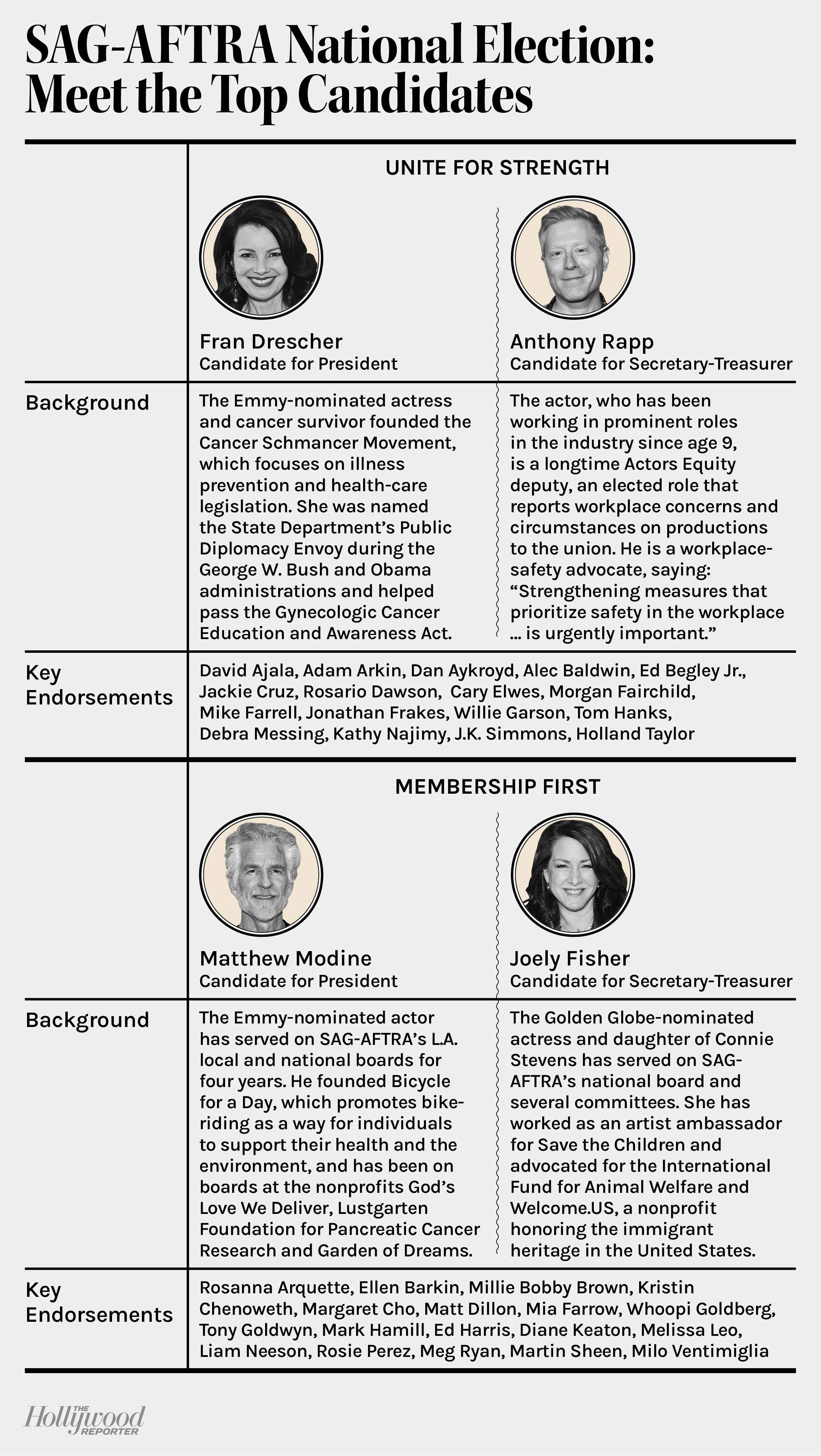 This story first appeared in the Aug. 18 issue of The Hollywood Reporter magazine. Click here to subscribe.