While the streaming era is a boon for video consumption, some on Wall Street are warning that new streaming platforms won’t be the biggest financial beneficiaries, with money flowing primarily to content creators earning top dollars amid the streaming wars and low subscription prices also keeping eventual margins razor thin. This might spell trouble for new platforms that are already bracing for losses for up to five years.

“Disney+, CBS All Access, Showtime OTT, HBO Max, Starz OTT and Peacock will all likely be among the survivors based on their positioning,” says Cowen media analyst Doug Creutz. “However, we also think that current financial forecasts — where they exist — for those networks probably lean toward the aggressive side.”

Liberty Media CEO Greg Maffei put a more dire spin on the situation while speaking at his company’s investor day on Nov. 21. “OTT will drain each other in a circular firing squad,” the executive said.

A team at Cowen is forecasting that U.S. consumers will spend $19 billion on streaming services in 2019 and $41.2 billion in 2024, which represents a 17 percent compound annual growth rate — seemingly healthy, except that there will be far more services taking slices of that revenue pie, eating into the streaming services’ profitability.

Low prices for new streaming services, designed to boost subscriber reach early on, is another issue holding back any financial upside. “Price will be a key weapon in the war,” the team of Cowen and Co. wrote in its Nov. 20 report.

On the flip side, the money streamers will spend to secure content, per Cowen estimates, will grow from $116 billion in 2019 to $144 billion in 2024. “Content creators win with additional money being spent,” notes analyst Bruce Leichtmann of Leichtmann Research, “as well as some older content, i.e. a half-billion dollars for Seinfeld after years in syndication.”

Disney has already said it anticipates its streamers — Disney+, ESPN+ and Hulu — to be a drag on its bottom line until 2024, and AT&T expects much the same for HBO Max, which debuts in the spring and is expected to bleed red ink until about 2025.

Analyst Steven Birenberg of Northlake Capital Management predicts, “Streaming will have a big shakeout in a few years, particularly among smaller players.”

While all the new streaming options are expected to boost the time consumers spending watching video, pay TV operators’ continued video subscriber losses due to cord cutting will mean the total subscription video market won’t grow much.“While streaming represents a new market – and given the availability of streaming on mobile devices, it is actually expanding the amount of time spent watching video through subscription products – we do not expect total customer spend on video in the U.S. to increase materially over the next five years,” the Cowen team of analysts predicts.

It forecasts spending on subscription VOD services from new media giants, such as Netflix and Amazon, to reach a compound annual growth rate of 12.7 percent between 2019 and 2024 and products from traditional media companies, such as Walt Disney and AT&T’s WarnerMedia, to jump 33.9 percent. (see chart) But it only projects a 1.7 percent compound annual gain for total video subscriptions, from $110.1 billion in 2019 to $119.7 billion in 2024.

“In part this is because we expect fierce competition for OTT customers – including from Amazon and Apple, which are using their OTT products to enhance the value proposition of their other services (e.g. Prime) and drive adoption of their broader platforms, rather than as profit centers in and of themselves – to restrain OTT pricing power,” the Cowen analysts argued.

In addition, traditional video subscription spending on cable, satellite and telecom TV services will fall 2.7 percent over that period from $91.9 billion in 2019 to $78.5 billion in 2024, according to their projections.

Amid all this, Cowen internet analyst John Blackledge remains bullish on Netflix’s outlook, arguing that it “will remain the leader” among U.S. subscription streamers as none of the new entrants “are substitutes for Netflix given its depth of content.”

Despite widespread competition worries, that argument has recently gained more traction on the Street, with Bernstein analyst Todd Juenger in a recent report writing: “Disney+ should not hurt Netflix. It is not a substitute, it is a complement. Netflix is a widely varied, constantly updated entertainment product spanning all interests and genres and adding new, different things to watch on a daily basis. Disney+ is a relatively narrow product, targeted specifically at enthusiasts for the Disney brands, with mostly catalog product and an occasional new original show.”

Netflix’s traditional media challengers may actually be “in a position where they have to choose between losing and losing worse,” argues Creutz, citing “compressing” pay TV networks margins amid cord-cutting and ad share gains by digital companies. “Even those players that push aggressively toward OTT are likely to continue to suffer margin pressure as we expect the environment to be highly competitive, limiting pricing power and driving up content costs.”

How can players make money in this environment? “Profitability beyond that point depends on some ambitious targets for subscriber uptake and/or pricing power,” Creutz concluded. “Winning (surviving) will come down to what the content business always comes down to: being able to maintain a stream of high-quality content.” 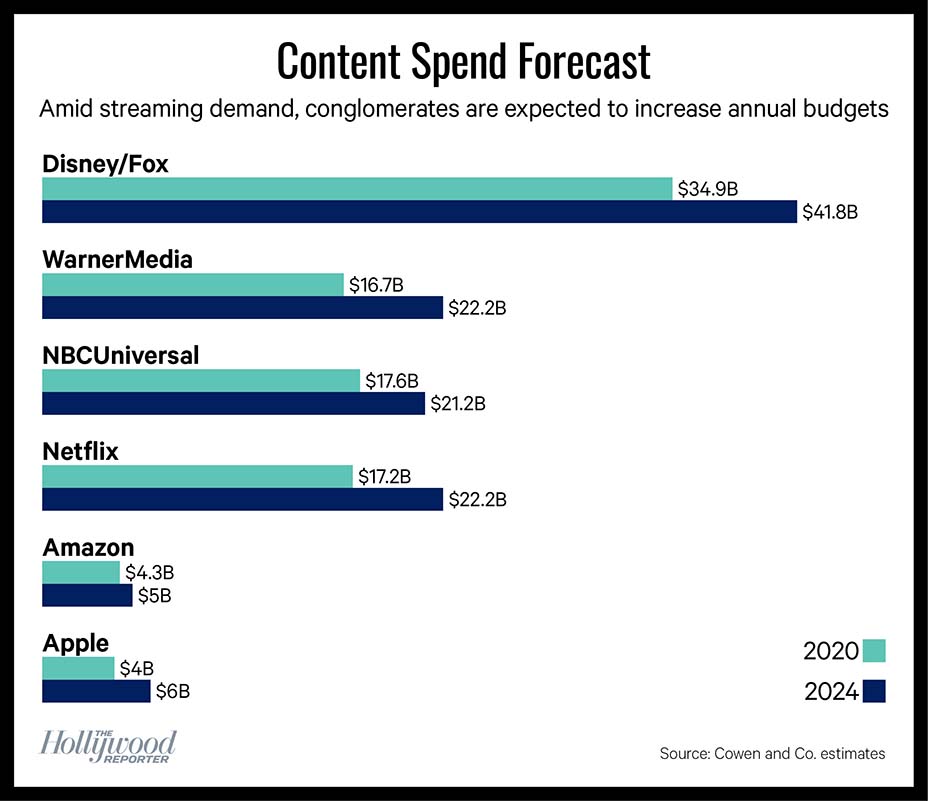