In the late 1980s, Hollywood marketers tossed aside a legacy of secrecy and turned box office grosses into public sport. Entertainment Tonight began doing spots on the weekend’s top-grossing films. TV newscasts soon followed. By 1991, all of the major studios agreed to make numbers available after decades of revealing only the positive — even though this era of transparency exposed them to headlines about box office bombs.

These days, Hollywood returns to original form when it comes to grosses for premium video on demand, a platform that came into its own when the novel coronavirus pandemic resulted in cinema closures and the shattering of theatrical windows.

Studios so far are declining to reveal their PVOD earnings, save for the lone case of Universal and Trolls World Tour. Trolls cost $19.99 for a 48-hour rental, which has quickly become an industry standard. While this lack of disclosure prevents analysts from judging a film’s standing, it seems crystal clear that big tentpoles with a budget of $100 million-plus need a theatrical release to be financially viable — which is why almost every mega-event pic slated for 2020 has been delayed for theatrical release. The reach of the global box office in terms of merchandising, establishing franchises and generating billions in ticket sales cannot be replicated.

Conversely, smaller and mid-range titles may be able to recoup an acceptable amount of their cost if they do well on PVOD. Yet no one is sure. “Are these PVOD titles doing well? I have no idea. If they were really good, I would think studios would beat their chests about it,” says Wall Street analyst Eric Handler of MKM Partners.

So far, the only two megabudget Hollywood tentpoles that have braved debuting during the pandemic are Warner Bros.’ Tenet and Disney’s Mulan, each of which cost $200 million to produce before marketing. Both debuted in the U.S. over Labor Day weekend, but they took different routes to reach consumers.

Global grosses for Tenet, which received a traditional run in theaters, stood at $334 million through Oct. 18. The vast majority has come from overseas ($283.4 million). In North America, where theaters remain closed in such major markets as New York City and Los Angeles, Christopher Nolan’s epic has limped to $50.6 million. Film financing sources say Tenet needs to clear at least $400 million at the box office to break even, which isn’t likely to happen. (The movie did receive some good news Oct. 17, when New York Gov. Andrew Cuomo said cinemas outside New York City can reopen at limited capacity as of Oct. 23 if the rate of COVID-19 cases is below a certain threshold and there are no infection clusters.)

Mulan, directed by Niki Caro, premiered on Disney+ in the U.S. and select international markets at a premium price of $29.99. In regions where the streaming service isn’t available, such as Asia, Mulan was made available to theaters. That included China, where the movie was a major disappointment after topping out at $40.8 million. All told, Mulan has grossed only $66.8 million internationally. (Any verdict regarding Mulan’s ultimate performance value is complicated as Disney reorganizes to make streamer Disney+ a top priority, including putting film distribution under the new Media and Entertainment Distribution Group headed by Kareem Daniel.)

According to exclusive data provided to The Hollywood Reporter by Screen Engine/ASI, 18 percent of those paying a premium charge of $29.99 to view were new Disney+ subscribers. Of those, 12 percent said they would remain members of the service. And of the existing subscriber base who paid to watch Mulan, 21 percent said they might have dropped their membership had it not been for the film. Days before the Disney reorganization was revealed, the film studio said Pixar’s Soul also will bypass theaters and be made available to Disney+ subs Dec. 25 at no extra cost. Many took it as a sign that Mulan disappointed on PVOD, while others viewed it as a grab for new Disney+ members.

“Anything they can do to keep up their number of subscribers is good,” says Screen Engine/ASI’s Mark Orne, who heads a new service tracking viewership for home entertainment titles in the COVID-19 era. Orne believes that PVOD has generated needed revenue for Hollywood at a time when the box office is on life support.

Orne says there’s consumer confusion as to the new PVOD phenomenon, in terms of why someone should pay $19.99 to rent a movie which they can rent digitally during the normal home entertainment window for $5.99. “There’s a lot of education to be done outside of early adapters,” he notes. “Most don’t understand these are new releases.”

Universal has been an undisputable beneficiary of PVOD with titles such as Trolls World Tour and Judd Apatow’s King of Staten Island, among other films launched on PVOD since COVID-19 struck, including Focus Features’ entries Irresistible and The High Note. NBCUniversal chief Jeff Shell told The Wall Street Journal that the Trolls sequel cost $90 million and generated $100 million in PVOD revenue in its first three weeks of play in the U.S., while sources tell THR that The King of Staten Island, which cost a reported $35 million to produce before marketing, generated $40 million in PVOD revenue to date.

“You’ll notice that Universal isn’t putting their tentpoles Jurassic Park: Dominion or F9 on PVOD. That will never happen,” says a studio insider. Adds box office analyst Shawn Robbins, “Studios have the control as to how they release movies. The question is, how does the business evolve?” 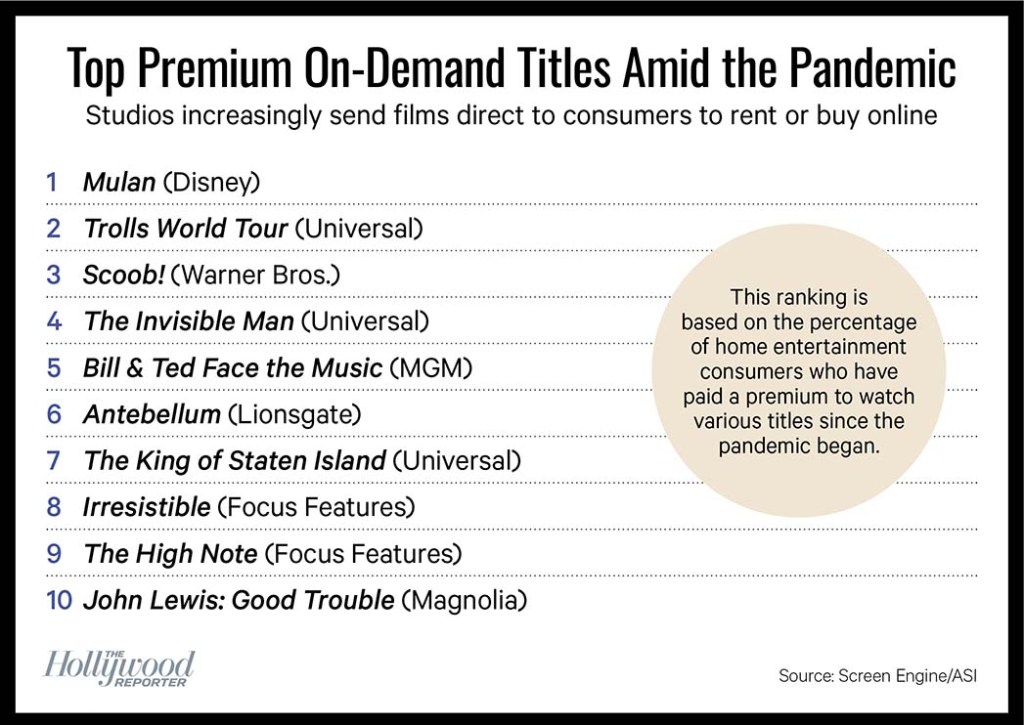 A version of this story appears in the Oct. 21 issue of The Hollywood Reporter magazine. Click here to subscribe.