After a year in which COVID-19 stay-at-home orders limited options for consumers, giving a boost to streamers like Netflix and Disney+, 2021 may see subscriber churn become a bigger issue amid gradual reopenings.

Last May, 14 percent of respondents to a Deloitte Insights survey said they had “canceled” or both “added and canceled” a paid streamer. That churn rate jumped to 38 percent in October and kept up at 36 percent in February, per a Deloitte report on April 19.

Some streaming services are taking a larger hit than others. As of the fourth quarter of 2020, Apple TV+ had the highest churn rate of major streamers, with a 15.6 percent monthly cancellation rate (excluding free trials ending and credit card expirations), per analytics startup Antenna. NBCUniversal’s Peacock, which launched July 15, saw the second-highest churn rate at 9.5 percent. “Both those services are lacking in original content. Hence, higher churn,” says MoffettNathanson partner Michael Nathanson. 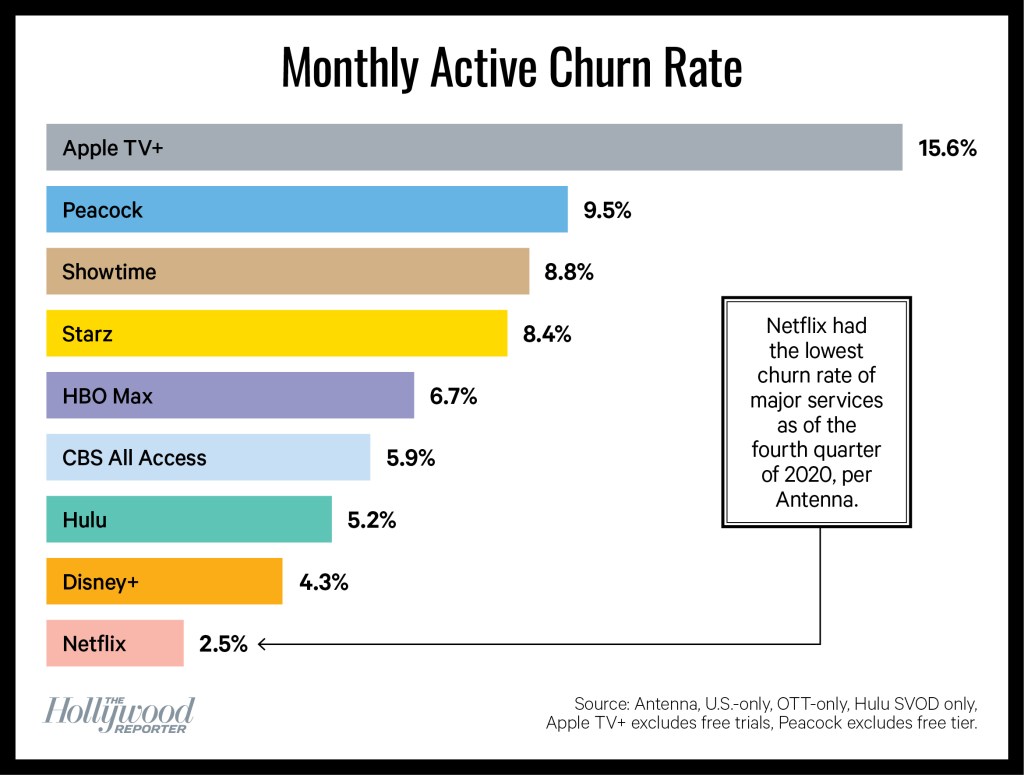 “Acquiring subscribers is challenging, but retaining them may be harder,” notes Deloitte vice chairman Kevin Westcott. “Leading services are spending on customer acquisition and new content, but it’s easy for people to sign up and watch what they want, then cancel their subscription and move on to the next hit.”

Executives are working to mitigate losses. Disney CFO Christine McCarthy noted in February that Disney+ is bulking up its film and TV library as a way to reduce churn, saying as “we put more content into the service and our subscriber base becomes more tenured, we expect to see our churn rates continue to decline.”

Other services that don’t have the scale of Netflix or Disney+ are hoping that niche audiences are key to retaining customers. Starz’ CEO Jeffrey Hirsch pointed to the service’s focus “on a female audience and underserved audiences” as a way of keeping and growing its subscriber base. Similarly, AMC Networks chief Josh Sapan told The Hollywood Reporter in March that the company’s British niche streamer Acorn TV has “among the lowest churn” among major services owing to its focus as well as viewers’ “dedication and affinity” for its content.

ViacomCBS streamer Paramount+, which is going for scale with 30,000 TV episodes and 2,500 films available to subscribers, is taking a different tack. CBS CEO George Cheeks remarked in February that Paramount+ will bet on global soccer rights since the sport is “year-round, which means no seasonal churn.”

And AT&T chief John Stankey noted April 22 that Warner Bros.’ day-and-date film release strategy — wherein the studios’ entire 2021 slate debuts directly on HBO Max and in theaters at the same time — is a tactic to retain subscribers. The exec said once a customer joins the service to watch a movie, the rationale to stay engaged is, “Well, gosh, I’m now into it for two, three weeks, and I know there’s another one coming next month that I want to see. I’m sticking around.”

Meanwhile, Netflix chief product officer Gregory Peters was asked on a Jan. 19 investor call about churn and indicated that a lower rate played a factor in the service raising its price from $13 to $14 a month. Peters noted: “We are looking for signals and signs from our members that are telling us essentially that we have added more value.”

Netflix CFO Spencer Neumann went into detail during an April 20 earnings call, saying that in the first quarter of 2021, “Our viewing per household was up year-over-year” and “churn was down year-over-year.”

Per Antenna, Netflix had the lowest churn rate of major services as of the fourth quarter of 2020. As a caveat, Antenna’s lead analyst Vanessa Ritchie notes: “Churn rates alone do not give the full picture of performance, especially when comparing across services in different phases of their product lifecycle.”

Netflix, with its 208 million subscribers and established market position, may have more leeway to make price tweaks. “For people thinking about subscribing to a brand-new paid streaming video service in the past year, cost matters more than content,” adds Westcott. “And an increase in price was the biggest reason that subscribers say they would cancel a service.” 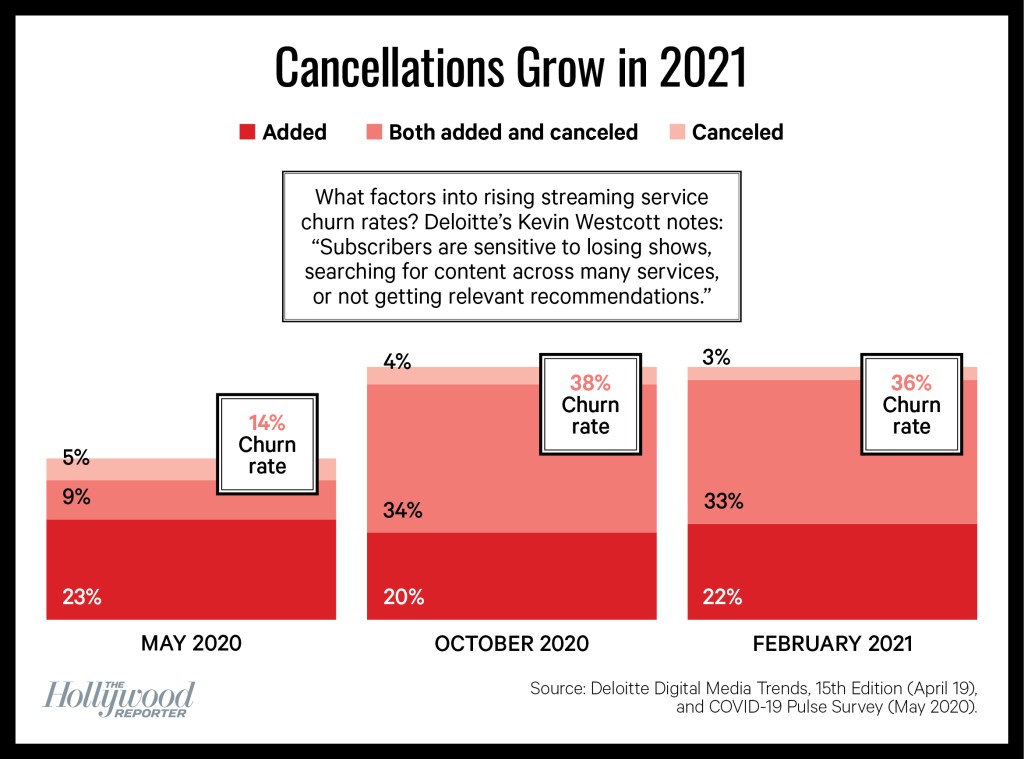